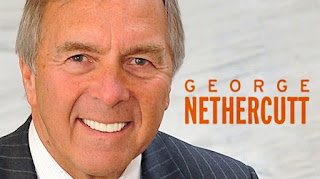 (Image from The Inlander)

There's a huge problem in this commentary by George Nethercutt in The Inlander.

"McCain was stubborn, too. He voted against his political party's wishes on the repeal of Obamacare. His doing so was interpreted as a vote against Trump. In his heart, he chose to be obstructive, perhaps to spite Trump. Nevertheless, doing so for spiteful reasons was small and petty. He occasionally acted in life as Trump acted in death, McCain's, that is. Such actions were not profiles in courage for either man."

Nethercutt states how how McCain's actions were interpreted, but not by whom.  By using the word "perhaps", Nethercutt himself implies McCain voted against the ACA repeal just to spite Trump. Consequently, he's also stating McCain chose to be obstructive. Now that he "establishes" McCain was being small and petty, he equates him to Trump who is small and petty in each and every way.


Then he laments McCain's actions as not worthy of a profile in courage. According to other senators--and this is easy to search for had Nethercutt had taken the time--before this vote McCain had learned of his brain cancer and decided it was wrong to cripple the ACA with a partial repeal.

Nethercutt does McCain a great disservice with this tripe. It's definitely not a profile in courage for him either.

In addition, Nethercutt makes the point that McCain voted against his party's wishes. He, along with many of our legislators, need reminding that they don't serve their party. They serve the people.
Posted by Hank Greer at 5:02 AM No comments: