The Former Majority Association for Equality is a non-profit organization reportedly established to help underprivileged white males go to college although their site doesn't make that claim explicitly.

From their mission statement:

Our goal: To financially assist young Americans seeking higher education who lack opportunities in similar organizations that are based upon race or gender. In a country that proclaims equality for all, we provide monetary aid to those that have found the scholarship application process difficult because they do not fit into certain categories or any ethnic group.

While this organization claims to be concerned about race, gender or ethnicity being used to provide financial assistance opportunities for college students, they have this on their scholarship application. 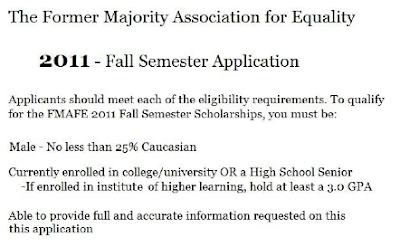 No doubt, the irony of their use of race and gender exclusion is lost on them.
Posted by Hank Greer at 12:06 PM No comments:

If only the news reporters would spend as much time covering real issues as they do talking about how cold it is.
Posted by Hank Greer at 6:35 AM 3 comments:

Wednesday was a day I did not have my camera with me and I really wish I had. That afternoon I saw an old woman...no, more like an ancient woman, operating a snow blower and working her way down the sidewalk.

From the path she had cleared so far I could tell she was doing the whole block.
Posted by Hank Greer at 5:53 AM 1 comment:

Email ThisBlogThis!Share to TwitterShare to FacebookShare to Pinterest
Labels: community

From One Thing To Another

There has been much trumpeting and bewailing of the Obama administration's decision to cease defending the constitutionality of the Defense of Marriage Act. What so many people don't seem to understand is that this does not mean the administration will stop enforcing the law. It simply means that if the law is challenged in court the administration will not defend it. So don't go looking for changes in how the federal government does business, e.g., changes to tax forms to allow for civil unions and same-sex marriages, just because the administration has decided Section 3 of DOMA is unconstitutional.

You can read the technical details in Attorney General Holder's letter here.

I can't help but enjoy the irony in Speaker Boehner's reaction to the letter:

"While Americans want Washington to focus on creating jobs and cutting spending, the President will have to explain why he thinks now is the appropriate time to stir up a controversial issue that sharply divides the nation."

Although their actions dictate otherwise, they try to make us believe that unlike President Obama they're all about creating jobs and not being controversial.
Posted by Hank Greer at 6:38 PM No comments:

The Unfairness Of It All

Viewed objectively, life can be just as ugly as it is beautiful. And as much as we cherish it, life is not fair. Sometimes people are punished because of that inherent disparity. Case in point, the concerted attack on abortion rights by the Republican members of the House of Representatives. For years now abortion has been a hot button issue guaranteed to arouse emotions all the while excluding the emotions of the women whose doctors have informed them that, for reasons they can't always explain, an abortion is a medically necessary procedure. It's not fair, but those women must decide.

Sympathy and empathy are pushed aside in the singular theme labeled as pro-life. They fortify their position by inferring that if you are not pro-life then you are for killing babies. It's preposterous to think anyone is for killing babies, but it is effective to portray them as such. This he-who-is-not-with-us-is-against-us position has been useful throughout the ages. George W. Bush used it to promote the Global War on Terrorism. Stalin used it to enforce his stranglehold on the Soviet Union. Matthew tells us that even Christ used it. To say that someone who doesn't agree with you is against you draws a line in the sand that says you must choose one side or the other which, in turn, inhibits discussion and civil discourse. There's no better way to put someone on the defensive than to accuse them of wanting to kill babies.

Beginning in 1976, Congress attached a piece of legislation known as the Hyde Amendment as a rider to the funding bills for the Department of Health and Human Services. It primarily affects Medicaid and it bars the use of federal funds to pay for abortions. House Resolution 3, entitled the No Taxpayer Funding for Abortion Act, further constrains the abilities of women to receive a necessary medical procedure whose name we are conditioned to speak with both shame and disdain. The act would deny the use of federal funds for health benefits coverage that includes coverage of abortion. It would not allow the expenses of an abortion to be counted as a tax-deductible medical expense. And if funds from a tax-preferred trust/account established for the purpose of paying medical expenses are used to pay for an abortion, the amount paid would be included in the gross income of the beneficiary. Business and non-profit organizations offering health insurance plans that include abortion coverage would lose the tax benefits they would normally receive by offering their employees health care. If enacted it's possible that a business employing single men would pay more taxes simply because their health insurance covers abortion. On the plus side, however, there are no restrictions on coverage for erectile disfunction.

Last week the Republican-dominated House also voted to approve the Pence Amendment which removes federal funding for Planned Parenthood. Speaking in support of the amendment, Texas Representative John Culberson couldn't have stated it any more plainly when he said, "Planned Parenthood could solve this public policy problem they've got by simply refusing to perform abortions." One could try to give Mr Culberson the benefit of the doubt. Perhaps he is unaware that federal funds aren't used to pay for abortions or that abortion is legal. But even if he were, his intent and purpose is obvious.

During debate, New Jersey Representative Chris Smith, author of House Resolution 3, read graphic details of an abortion from a book written by a woman who went through the experience. Many years ago I sat through such a description from a man who saw it firsthand. It was heart wrenching to hear and the bile of moral condemnation rose quickly in my throat. And yet as Representative Jackie Speier of California, responding to Mr Smith's calloused portrayal of women callously seeking abortions, spoke of her own experience I'd like to think some of her House members learned something I became aware of some years ago--just how little I know and how inappropriate my condemnation can be. Speier experienced the heartbreaking loss of a child, not a cavalier termination of an inconvenient pregnancy.

Not all pregnancies are perfect. Some go horribly awry. It's not fair but that's the way life is. Is it right to add to the unfairness and punish women who may suffer a similar tragedy as Jackie Speier?
Posted by Hank Greer at 10:19 AM No comments:

Steph (in the purple UW shirt) and I stopped by the KPBX Recordings and Video sale today. Satisfying my penchant for things that are completely different, I found a self-titled album from 1969 by Larry Coryell and a 12-inch single by Lil Wayne that includes a version marked "clean". Whew!

Steph's selections included four cassettes: two by the great Louis Armstrong, one by KC and the Sunshine Band, and Wham! By my rating scale that makes her three for four. We have a cassette player in the van so I got listen to George Michael and Andrew Ridgeley sing "Wake me up before you go go...." Of course, there was a slight delay as Stephanie had to puzzle out opening the cassette case. Yeah, that from the girl who can't hide her exasperation as she runs circles around me on a cell phone. Or iPad. Or iTouch.

Okay, maybe I should be quiet.
Posted by Hank Greer at 1:51 PM No comments:

Three times during my run to work yesterday morning I was greeted with that overwhelming odor indicative of a skunk upset about one thing or another. For three brief moments I quickened my pace so I could breathe easier so maybe there's something to be said about that as a training regimen. And perhaps it is a harbinger of warmer weather. Just trying to look at the bright side.
Posted by Hank Greer at 8:49 AM No comments: 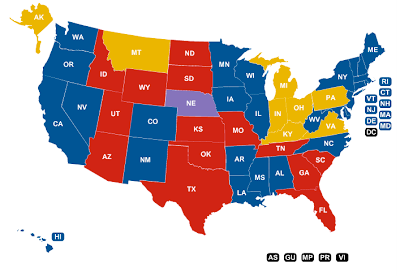 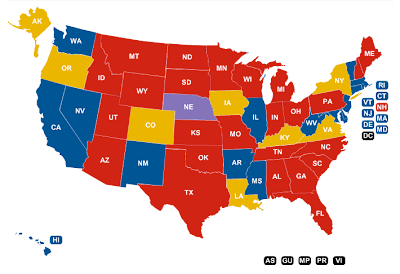 In the meantime we have almost 21 months to find out what effect the Republican's boot on the American worker's neck will have on the 2012 elections.
Posted by Hank Greer at 6:23 AM No comments:

The Inlander is holding another 101-Word Fiction writing contest. I don't know why I didn't bother with it the last two times. You may think that a 101-word story is too small to tackle. But I think you'll be surprised by just how much you can say in just 101 words.
Posted by Hank Greer at 5:37 AM 1 comment:

Email ThisBlogThis!Share to TwitterShare to FacebookShare to Pinterest
Labels: writing

I've changed my mind. There's just too much inanity to keep quiet about.
Posted by Hank Greer at 8:45 PM 7 comments: