Some months I told my brother John that he should come over and we could do the Midnight Century together. (Foolishly) accepting the invitation, he drove over from Tacoma yesterday. We bought the necessary energy bars, energy blocks, energy packs, and fluids and loaded our bikes. I went with a trunk bag and John had a CamelBak backpack. I chose not to go with a backpack because my back gets too sweaty and I like to hang my camera on my back. 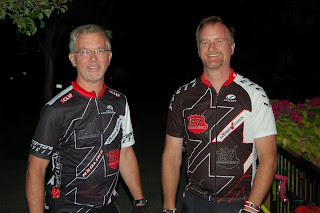 Representing Team Double Check, John and I wait outside the Elk. John Speare was kind enough to take the "before" photo for me. We look eager, energized, and positively motivated. And we match! 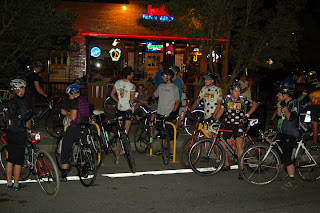 Milling about waiting for the start, a few riders made last minute preparations, which included loading beer into the bottle racks for one young man. Oh, to be 24 again, eh? 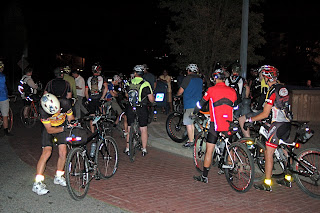 John Speare said he counted 48 at the start. Although (my brother) John and I were riding together, I was glad to see so many since that meant we might be able to join up with others. Misery loves company. 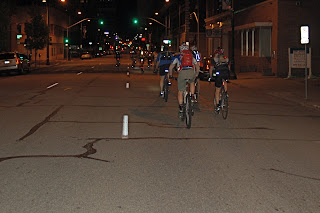 I guess it was 11:59, because suddenly riders started taking off. John and I joined in the chase and took off like slightly warmed cats. I think the scalded cats were three miles ahead of us in about two minutes. 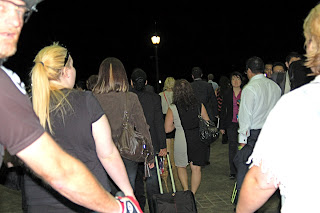 We were making good time going through a relatively empty downtown until we hit the Convention Center. Something big had been going on and that something big was now over and a gazillion people were pouring out of the place. We had to walk our bikes. John led the way and a chain of bikes sliced through the huge crowd. We remounted once we got to the Centennial Trail and threaded our way through the last of the crowd. 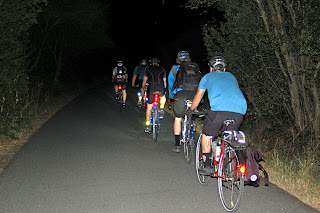 John and I ended up with a young man who introduced himself as Jess. The three of us took turns leading our mini-pace line and we tore along Upriver Drive and the Centennial Trail. ("Tore" is a relative term since it felt like we were hauling ass but I couldn't say for sure because I don't do the bike computer thing.) Since the first 20 or so miles are paved and relatively flat I thought it wise to cover that quickly. We picked up a few others along the way. That's John leading the group above. We made good time but the group broke apart by the time we reached the border. John and I stopped for a few minutes to have a snack and Glen showed up. We rolled with him for a while. The climb up Idaho Road foreshadowed the rest of the ascents for me. I thought I had shifted to the small chain ring and scampered up the hill. 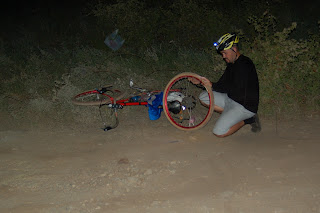 Arriving at the top I found Patrick changing a flat. Looking my bike over I discovered I was on the big chain ring. It wouldn't shift to the smaller one. I left it alone since I tend to make things worse when I work on them. (On a related note, I'm used to it because my so-called training consisted of commuting to and from work on the big chain ring. I'm having issues with the middle ring on my commuter. Why don't I get it fixed? It's the conundrum of not being able to ride my bike when it's in the shop vs riding my bike in a less than ideal state but I at least get to ride. Don't try to understand my stupidity. It is what it is.)

John and Glen arrived and we took off again. Our differences in stopping and eating patterns broke us up after several miles. Then a group you could refer to as the Brew Crew--taking the name from the jersey worn by the guy who loaded beer in his bottle racks--caught up with us. We alternated passing each other and riding together for about 20 miles. 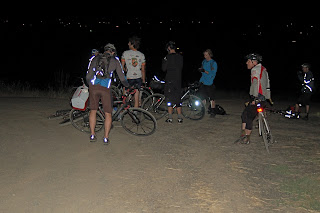 After our descent we missed the turn onto the gated section of Dunn and ended up taking the long way to get back on course on Elder. Going through a set of rollers I didn't notice John passing me. After a bit I thought he had fallen back so I slowed down. After the rest of the Brew Crew passed by I only saw a couple of headlights behind me so I stopped to wait. 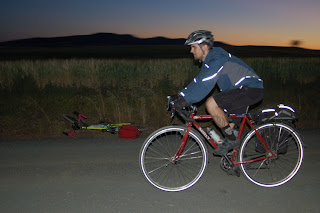 I took pictures of both riders as they went by and got worried about not seeing John. The sun was coming up and he might turn into a pumpkin. Coyotes might eat him. An elk might run him over. He might not live to pay me the money he owes me. You know, all those things a big brother worries about when he's worried about his little brother. 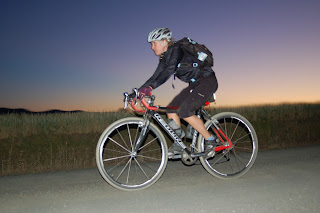 So I rode back until I reached a point where I knew John was with me. Patrick came down the road and said he hadn't seen anyone. At that point I knew John had gotten by me unnoticed and now he's probably wondering where I was. So I turned around again--and met John at the next intersection. He was worried he wouldn't see the money I owe him. What a guy. 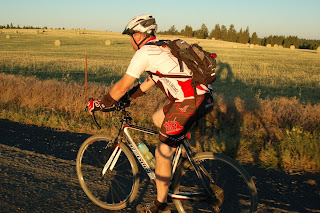 Now John and I alternated with Patrick for the remainder of the ride. Patrick was good enough to keep us on course at a couple of key points. It's great when veterans familiar with the course help us newbies.

For the climb up Spangle Creek Road I manually put the chain on the smaller chain ring. It was much more manageable that way. The last 25 miles were pretty much a blur. I was ready to finish up. John was pretty tired but he gamely hung on as I pulled for much of the Fish Lake Trail. 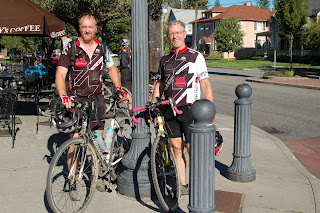 John Speare recorded our finish time at 8:24 am and kindly took the "after" photo for us. We look tired, dirty, and ready to crash. We topped off our accomplishment with a deservedly huge breakfast at Dolly's Cafe. This was John's longest ride ever. Between the missed turn and the backtracking I figure we made the ride a true century. He admits he didn't train for it but he did great. We already have it on the calendar for next year.

Terrific job on both the ride and write-up, Hank.

With all the money you and John owe each other, my only question is who bought breakfast.

I bought breakfast, Pat. I thought it was the right thing to do since my invitation was the reason he was there.

Great job guys! It was a fantastic ride. This was my first midnight century and I am already excited for next year!

Great story on the ride Hank. I'll be changing up my drive train for next years ride so I can make it up the never ending hills.

Wow, glad I stayed in bed. Nice to read about it though.

nice write-up, great you got to do it with your brother. I can share your triple-ring frustrations. The middle-ring on my commuter bike has been rubbing in the higher gears, and last time I tried adjusting it, I only made it worse so had to take in to the shop. I'm ready to change it out for a 2X10 set-up. Or just get a new bike.