Wow, the folks in Missoula know how to put on a great race. I decided to race just men's masters 50+ because the race was back-to-back with the single speed race. Our races were scheduled to run 50 minutes. There's just no way I could handle back-to-back 50-minute races and come away with any feeling of enjoyment.

Stephanie is going to school at the University of Montana so Kathy went with me so we could hang out with Steph. Consequently, I did not do my usual routine of shooting all the races and creating a video. But I did turn Steph loose with my camera while I raced and gave her a few tips. She did great and I uploaded about 600 photos to the INWCX Facebook page.  Thanks, Steph!

My race on Saturday was at 3:40 pm and it started out cool and dry. The masters 40, 50, and 60+ groups were started in waves with a 20-second gap between each. I started in the back of the 50 group so I wouldn't get in anyone's way. As the race progressed four of the hard-core 60+ guys passed me by. The course was hard at first and seemed to get easier with each lap, most likely due to an increase in comfort and confidence levels. The run up on the back side was pretty cool in that they cut these huge steps out of the hillside. That got chewed up more and more with each race. It was a worthy run up. On a side note, because of the permitting no hand ups of any kind were allowed on the course. Fortunately, that's the only down side to this event. The back side also included navigating through deep gravel with a couple of sharp turns thrown in just to shake things up a little. I stayed upright, kept my weight towards the back, and kept a light touch on the handlebars. Every once in a while my front wheel would squirrel off into a deep section but as long as I kept applying power I was fine. The course included a succession of short BMX-like whoop-de-doos. Those were fun. That was followed by a 180 through deep sand. On one lap I heard people yelling for me to get the money in the sand. I spotted a $1 bill during my turn, dismounted, grab the buck, and ran for the barriers that were up next. After the race Steph told me a racer after me picked up a $20. Dang! I need to look around more.

The barriers were tempting in that they were short enough for me to hop. But they were also close together so if I didn't land the first hop correctly I would pay dearly for the second one. I decided to dismount and run through instead. The second set of barriers were higher so there was no discussion there. Clouds threatened most of the afternoon and finally followed through during the last 1-1/2 laps. Rain slicked up the course. On one turn in the grass I powered by another guy only to have one or both of my wheels slide out from under me. That got my right side dirty and my pedal took a chunk out of my right shin.

I took the last downhill before the finish really fast and my front tire slid out during the turn at the bottom. That got my left side dirty and gave the side of my butt a nice rash. It was a fun race. Steph took photos for me. I wish I could show you some GoPro footage but I forgot to turn the darn thing on. Brilliant!

Thanks to the rain I was cold and wet at the end. We packed up and headed to the Marriott where a wet and slightly muddy old man wearing a black shirt, black shorts, bright pink and yellow socks (I had removed my tie) got a lot of strange looks as he checked in.

Day two found us at the race at 10:00 am. I was set to race at 11:10. The course was soggy and muddy from the torrential rains that feel during and after the races the night before. We were going in the opposite direction this time. They removed the run up but one of the ride ups was too steep and slick for most of us so that served as a suitable substitute. The tight turns were precarious in several spots because the mud was so thick. There was only one set of barriers to run through. The wet sand packed down pretty good so it wasn't a factor. But the mud was glorious. This time I remember to turn my GoPro on--about 2-1/2 laps into the race. I only fell down one and this time it was while going up the downhill I feel on the day before. I took a bad line and my front wheel slid out from under me. I even got it on video. 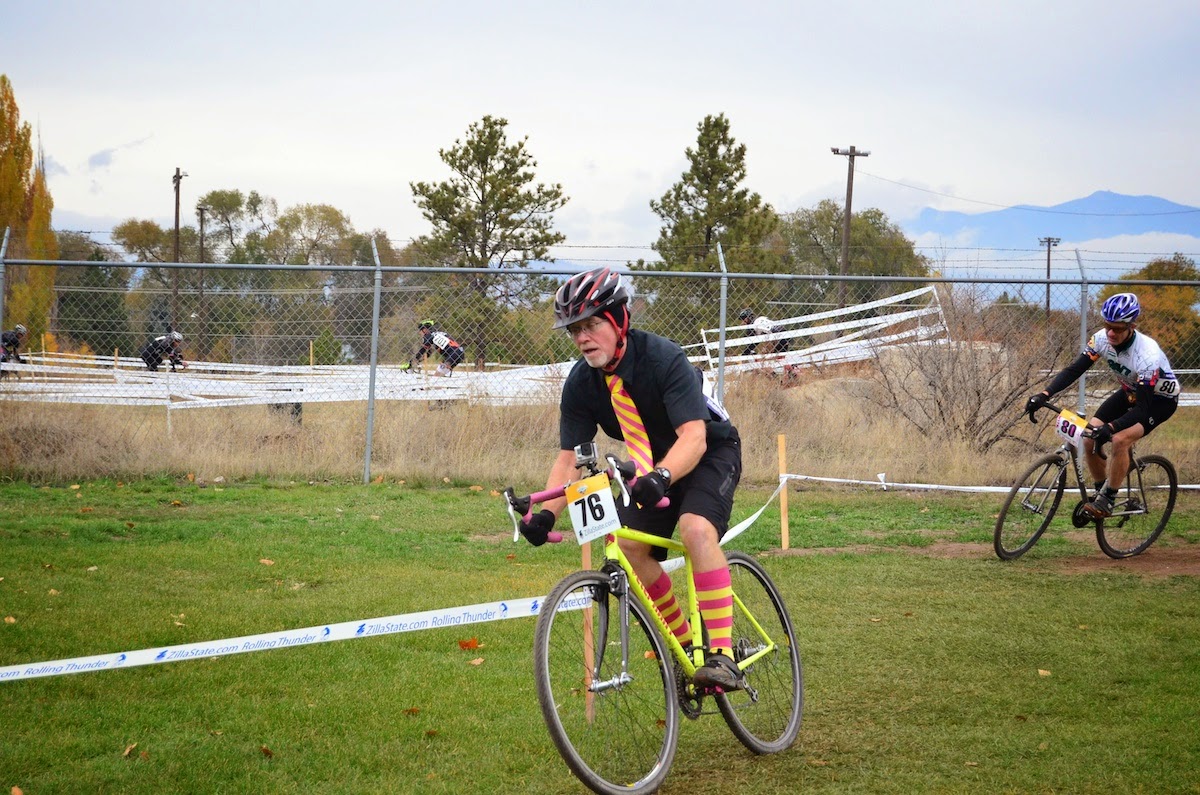 I was actually in front of someone. 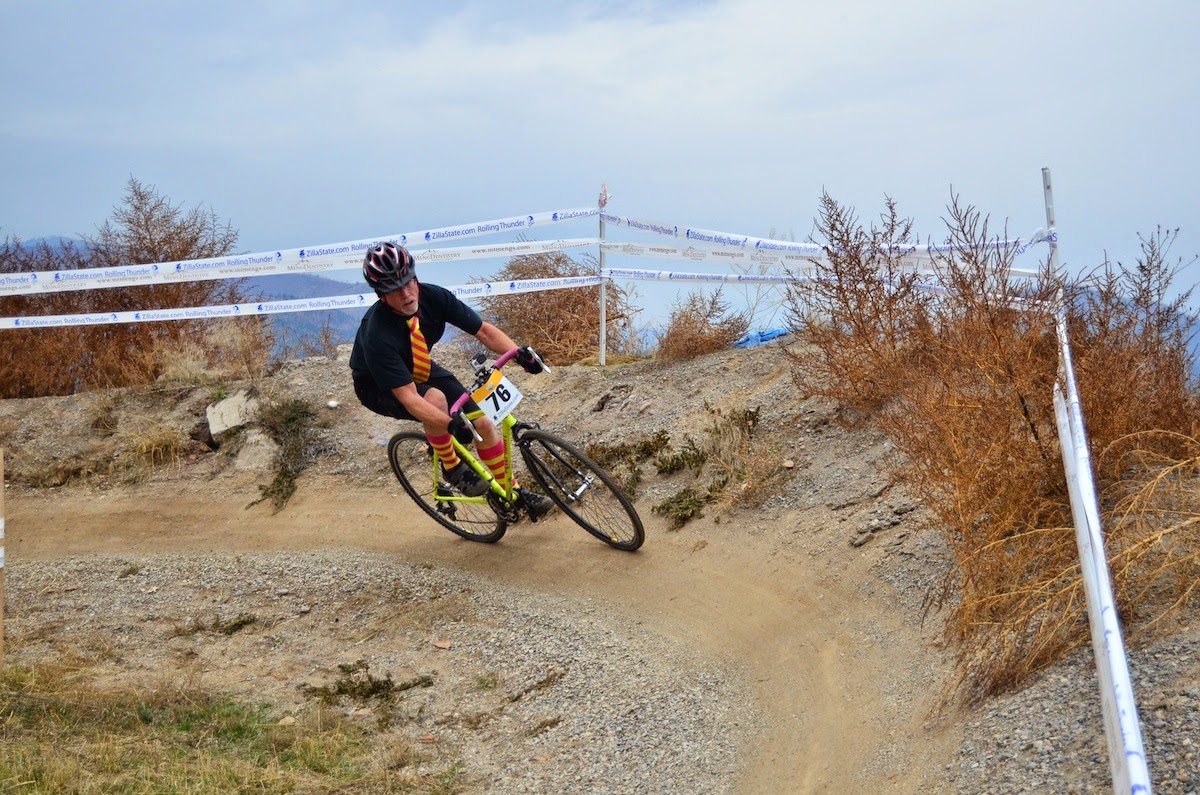 A split-second capture of my subsonic speed on the bank. 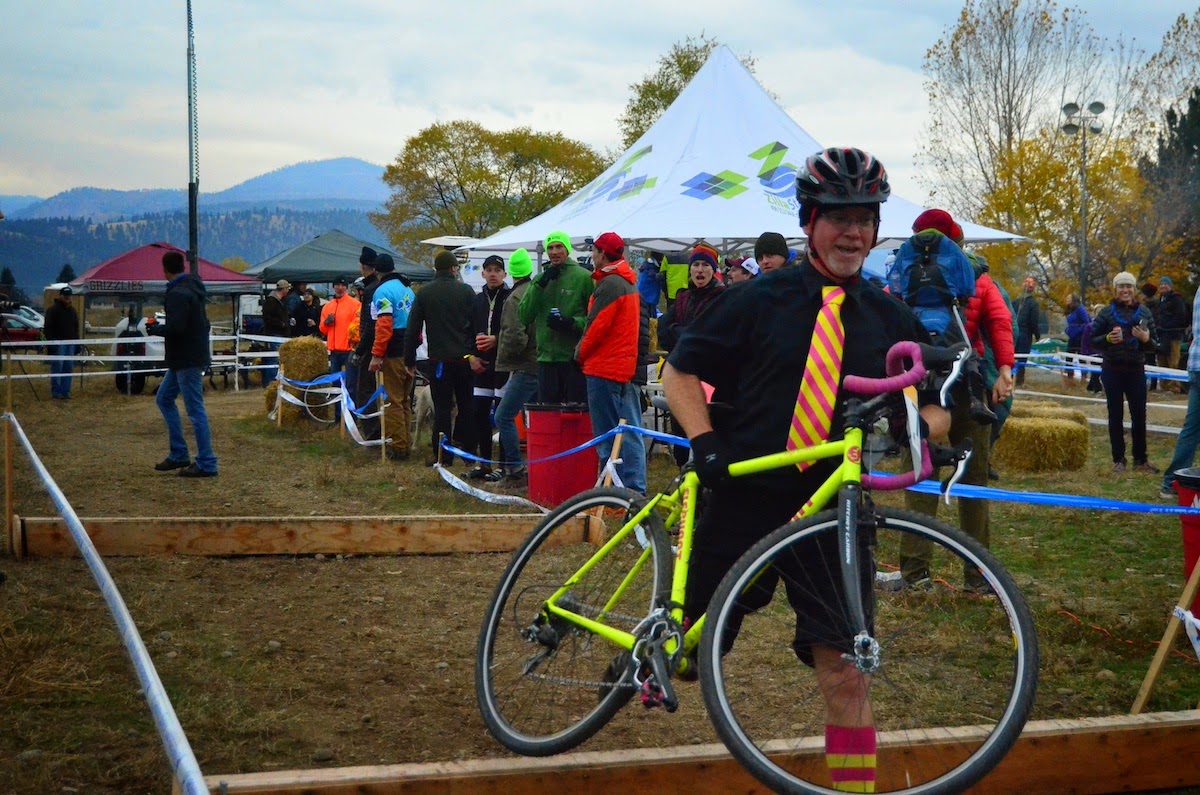 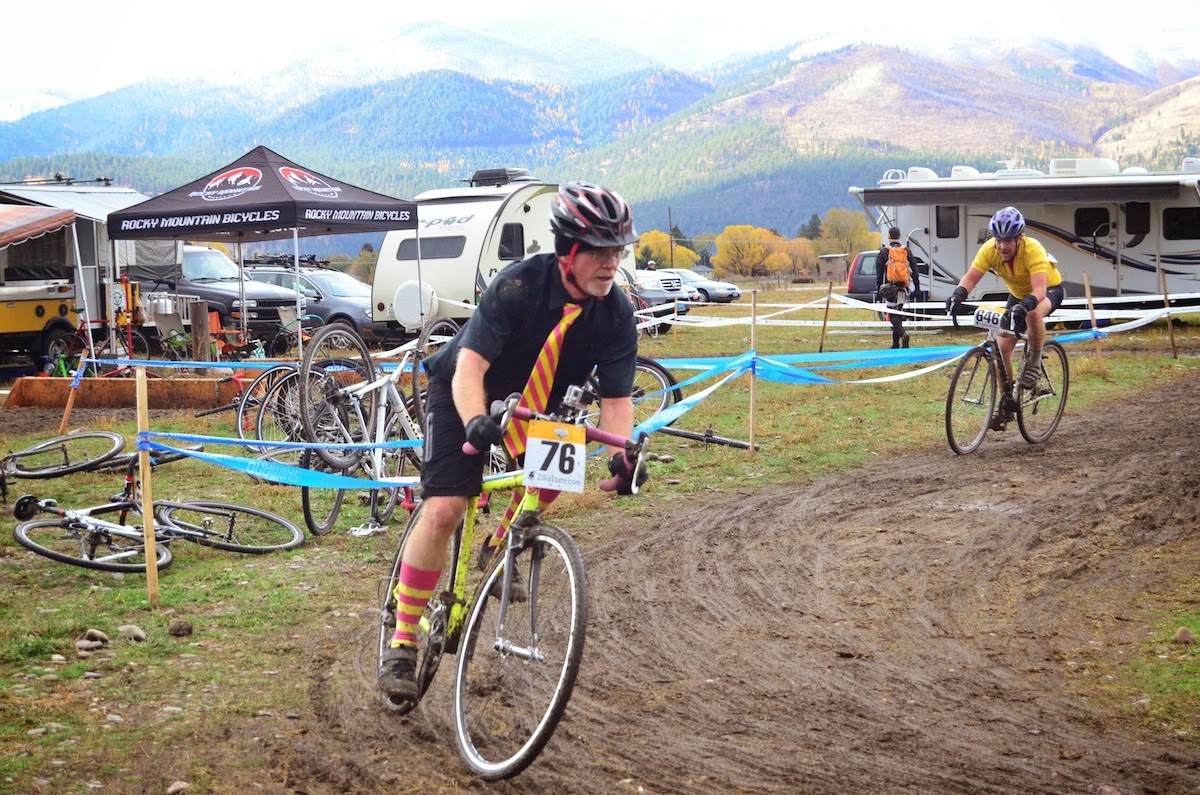 Not quite on the Sven line. 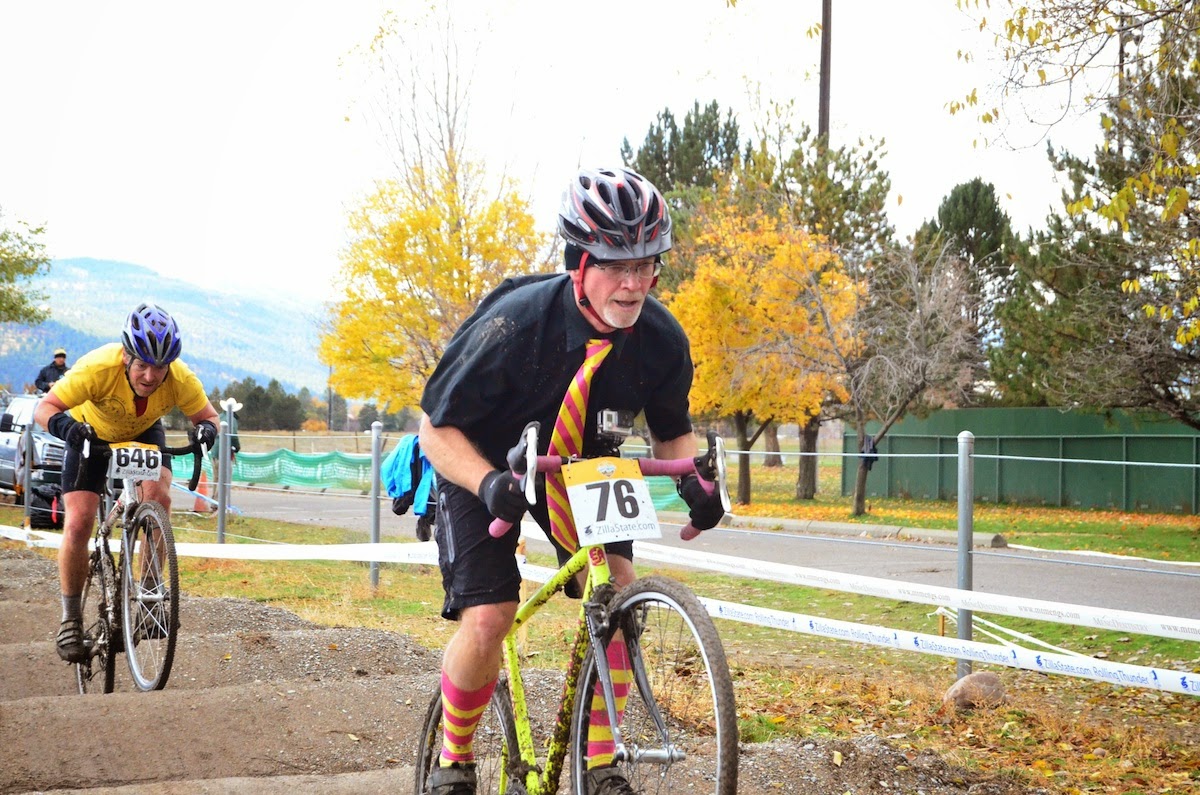 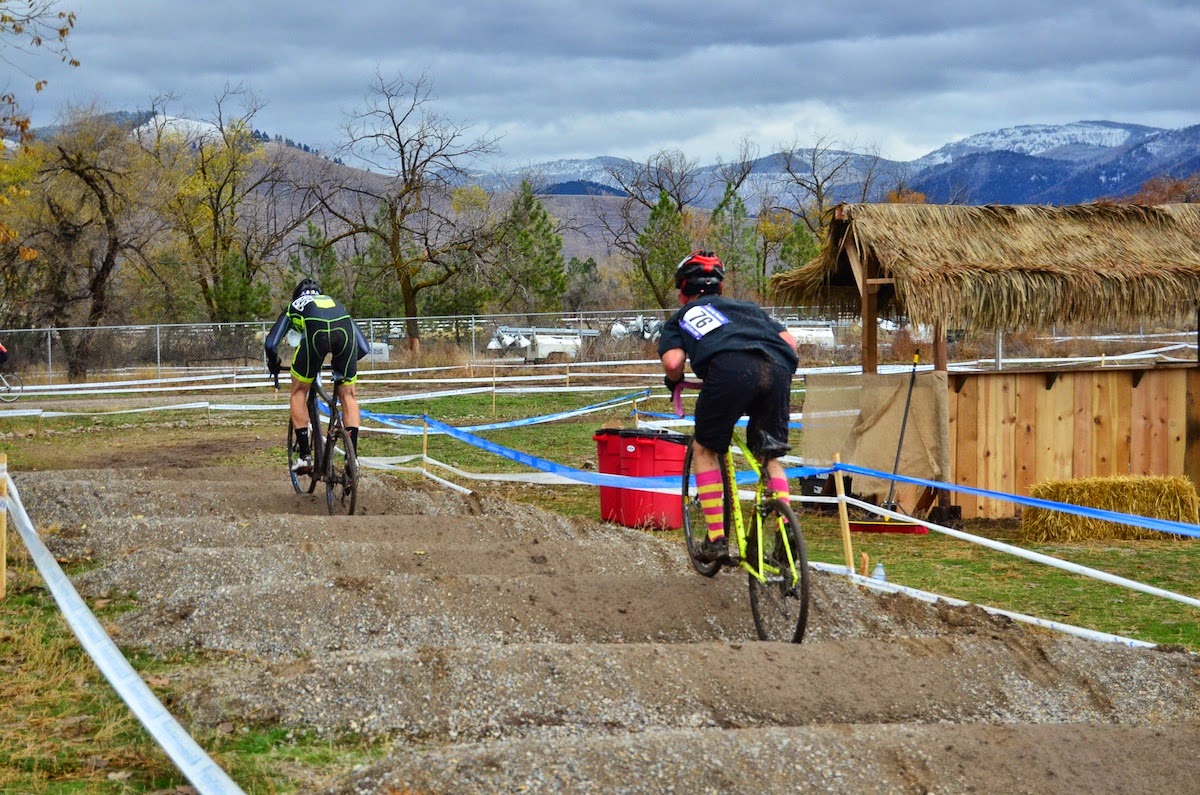 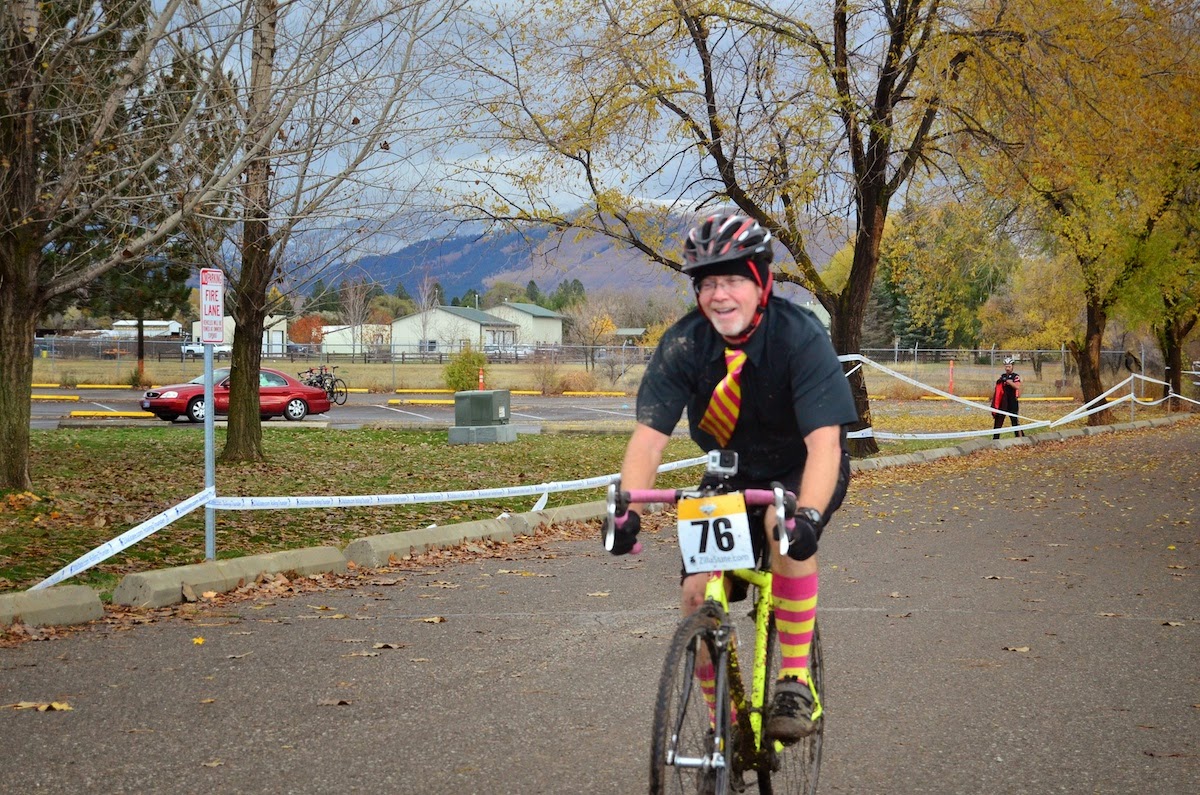