My Brother, My Son, And I Went For A Bike Ride 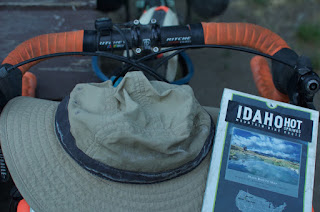 My brother John and my son Geoff and I had quite the adventure riding the Idaho Hot Springs Mountain Bike Loop. There are too many stories to be told here so I'm providing a number of photos and some short snippets. Riding the loop is hard work, but it's also rewarding. There were areas that seem so desolate and lost. There were wonderful people along the way. 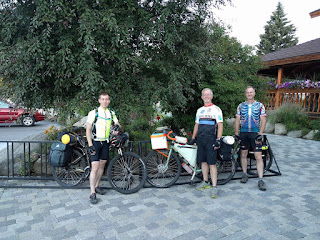 Geoff, me, and John just after breakfast on day one.
Our bikes and gear weigh between 72 and 80 pounds. 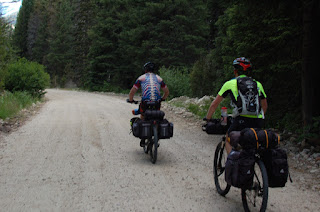 Climbing. It's what you do on the loop. 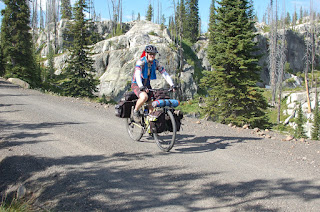 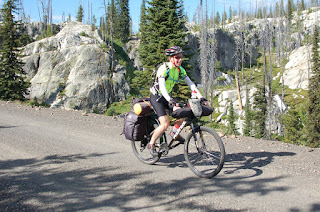 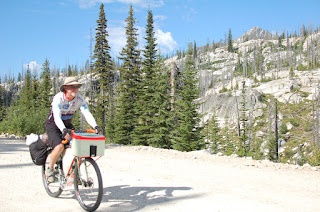 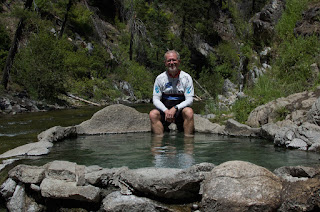 Although there are some 50 or so hot springs along the way, we stopped at very few of them. Some are privately owned. Some we missed because we weren't watching the GPX map on our phones. And sometimes the last thing you want to do during the heat of the day is sit in hot water. 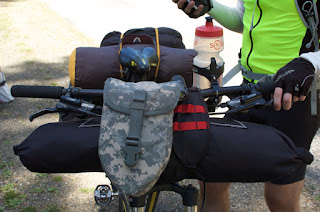 An entrenchment tool makes for an interesting bicycle head badge. We never needed it but Geoff brought it along just in case. He's super fit so the extra couple of pounds didn't faze him. 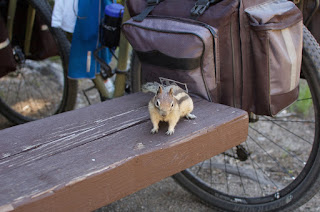 A persistent chipmunk at the Deer Flat campground between Warm Lake and Stanley. While we were eating lunch at the picnic table we heard, CRACK! Crack-crack-crack-crack-CRASH! A tree about 50 yards away fell towards us. We were in any danger but it sounded like it was coming through the trees right at us so it was a bit alarming. 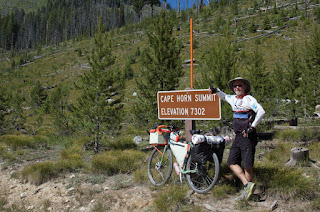 One of the summits between Warm Lake and Stanley. 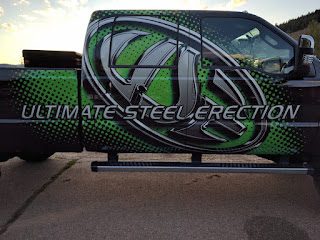 Who wouldn't want one? 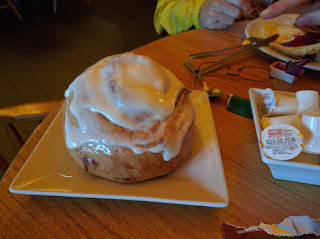 John ordered a cinnamon roll to go in Stanley. It lasted him four days.

Somewhere on the first day of riding, a rock or something hit my rear derailleur cage and broke part of it. We bent it back into place and figured it would be okay for the duration. It wasn't. On the third day and about 26 miles out of Stanley, the cage gave up the ghost. To top it off, John, who was our mechanic, was no longer with me and Geoff. The climbs were really getting to him and the fact that his small chain ring had 28 teeth didn't help at all. So when he left Stanley, he took the Lowman Cutoff which gave a him a shorter route back to his truck. Geoff and I were about six miles away from the highway. Fortunately, we had about 600 feet of elevation to drop down so I coasted most of the way back. We stuck our thumbs out and in five minutes we were being loaded into a pickup truck. The mechanic at the bike rental shop in Stanley had a busted bike with a good derailleur. He installed it and we were back on the road. But now it was 4:30 pm and we had 67 miles to get to Ketchum and an 8700 foot summit to get over. As fate would have it there was a strong, hot headwind blasting our faces to make our trip even better. I had enough of that after 15 miles and stopped where there was room for someone to pick us up. We stuck out our thumbs again. An 80-year-old German-American woman named Juda (yoo-duh) stopped and saved our bacon. Juda has quite the life story, which I will share some day. She dropped us off in Ketchum and we were extremely grateful. 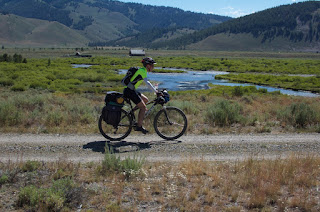 Geoff and I on our first attempt to leave Stanley.

Geoff's panoramic shot of what lie ahead not long before my derailleur broke.

The Ketchum to Featherville section was pretty tough. First we had an 8700-foot summit to get over. Then we had a long ride in the heat. I knew a section of the route between Ketchum and Featherville was washed out but that it was also passable on foot. Signs and people along the way warned us about the big washout and that the road was closed. We paid them no mind. An oasis we stopped at, The Big Smokey Bar, we got to drink ice cold Cokes and Gatorade. 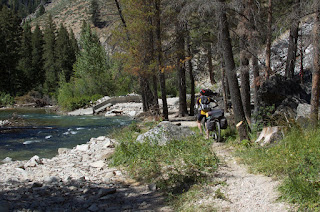 You call this a washout?

When we reached the washout we found it wasn't all that bad. It seemed to us everyone was making a big fuss over nothing. Then we hit the real washout. 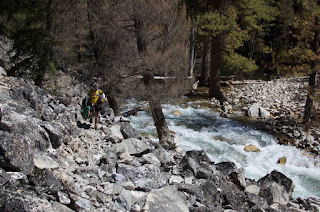 We had about 1/3 mile of clambering over and through rocks to get to the other side. Geoff and I offloaded our gear and carried across and then returned for our bikes. It added about an hour to the day's trip. We crossed paths with two Australian women who were the first loop riders we'd seen so far. They were doing the southern section. 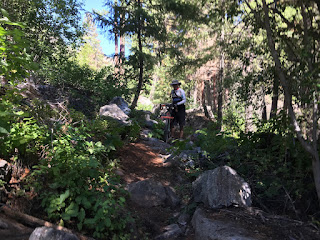 The ride from the washout to our destination, Featherville, was hot and dry. We were loaded with dust when we rolled up. We got a beer at the Featherville Saloon and then grabbed dinner at Cyndie's Cafe where we dutifully signed the register as Hot Springs Loop riders. A room with two beds and a shower at the motel was a bargain at $64 so we treated ourselves.

Leaving Featherville, we decided to use two days to get to Idaho City. Geoff and I saw no sense in doing a 1000 and then a 2000-foot climb and then follow those late in the day with a 4000-foot one. After the two climbs it turned into another scorching day. About 10 miles from our destination, the Cottonwood Campground, we found George's Tavern, yet another place in the middle of nowhere with cold drinks. Two other bikers were there. They were doing the route counterclockwise. We told them about the washout but that it was passable. They had a third member who had trouble getting over the 4000-foot climb and was somewhere behind them. His name was Alex. About five minutes after leaving George's we found Alex sitting in the shade. We told him the other two were just a few minutes ahead drinking Coors and Mike's Hard Lemonade.

"Get out of here!" And he waved us away.

I don't think he believed us. So we left him there to kick himself later for not getting up and going. When we arrived at the campground we saw the canyon ahead of us was filled with smoke and ash was lightly falling on us. That made us a bit uncomfortable but since the wind had died down we just went with it. It was clear in the  morning. The climb going to Idaho City was long and hard. I walked a couple of times not only because it was steep but to give my butt a rest from being ground into the saddle. Soft tissue management is a must on a trip like this. If you get behind (pardon the pun) you may never catch up. And it's painful. 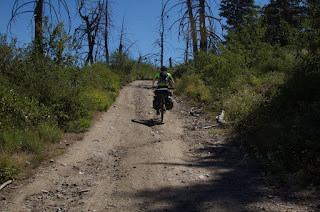 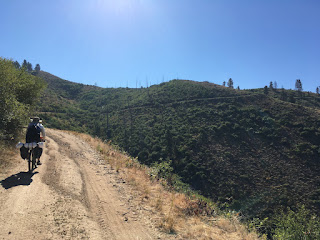 To call this a road would have been a kindness. 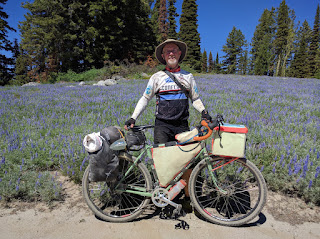 Peaking at an unnamed summit.

Coming down from the top we ran into John who had since made his way back to McCall and his truck. He brought cold drinks and the fixings to make sandwiches. What a welcome sight and what a high point of our ride. The icing on the cake was being relieved of much of the weight we were carrying on the bikes and putting that stuff in the truck.

John  had scoped out Idaho City for us. All the motels were full. The city was being used as a base for the fire fighters. But the owner of Idaho City Lodge would probably let us pitch our tents in the back yard. And the power was out because of the fire. (There were two fires. One between Idaho City and Boise and one northeast of Idaho City. The first knocked out the power. The second was being fought from Idaho City.) Cinda, the owner and proprietor, charged us three $20 to camp in the back yard and she provided towels for the shower. The power came back on. We bought steaks and salad and shared a barbecue with Cinda and two guests. Cinda made the best potato casserole I've ever tasted. 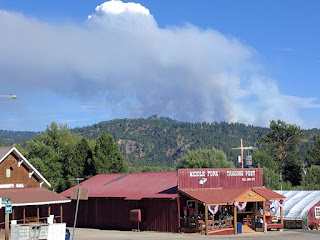 The wildfire off in the distance from Crouch was not in our way.

From Idaho City we passed through Crouch and camped at the Trail Creek Campground. That meant we'd attack the first climb early in the morning when it was cool and hope the third climb (2000 feet) wouldn't be too hot.  John scouted out Cascade and found it busy with everyone coming out for the weekend. We scored tent sites at an RV campground where we also had showers and laundry. My single jersey, shorts, and sun sleeves were grimy looking even though I rinsed them out just about every day we traveled.

Our final leg from Cascade to McCall was an easy 53 miles in comparison to what we'd done already. My butt was tired after nine days in the saddle so I was relieved to be done. 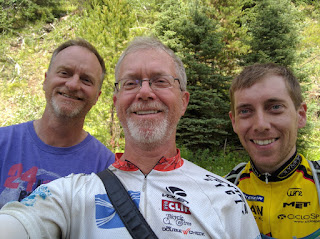 There's more to be said but for now I'm thankful these two great people were with me.