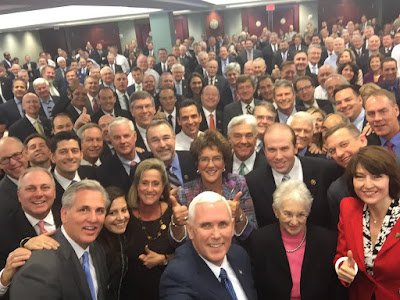 Thank you, Hank, big fan. The biggest. Thank you for sharing this picture of your election night block party. Great, really great. So great. Celebrating my big win. The biggest win. Bigger than the Civil War. Believe me.

Some of your neighbors look familiar. Trust me, I'm great with faces. The guy in front, big supporter. Recognize him. Say hello.

This election was about freedom. So much freedom. It was about your neighbors freedom to choose to live in a 95% white neighborhood, in an 84% white city, in a 77% white state, in a country only 63% white. Freedom.

The lying media hates when I retweet white nationalists like Timothy Egan. But isn't he right? Of course he's right. So right. White people are good because they "care where their food comes." Couldn't have said it better myself. He's so right. So left but so right.

The Twinkie Defense days are over. I love junk food, but I admit it's over. I really do. The junk food KKK is done. The Donald J. Trump era is all about the Whole Foods Defense. Thank you Tim Egan. White people need safe spaces to shop for organic. White food for white people. So great.

My campaign was about diversity. So much diversity. I am president for both white people and "other white people." For Coors and kombucha. For both. Big league. Thank you Timothy Egan. So right.

Love lilies. Beautiful. So, so beautiful. White spreading petals. Beautiful like my lovely daughter Ivanka. You should see her. Petals.

White women like Ivanka need safe spaces. It's a feminist issue. White men, too. So, so important. Especially on Broadway. Especially with black actors and Mexicans on the stage.

We will build a wall at the edge of every stage. We will make the actors pay for it. Believe me. Theaters should be safe spaces.

That's why I'm reaching out, for diversity. Across the aisle. I'm asking other-white nationalists like Crooked Hillary and Tim Egan to join my Bannon transition team as senior advisors.

I freely offer them a place on my diverse White and Other White Citizens' Council, uh, Cabinet. Whatever.

Such a generous offer, the most generous, ever. For diversity. For freedom. So much freedom.

Welp. In "defense" of Alt-Whites like Egan or Hillary or Lena Dunham etc etc, I think their de facto racism is more an outcome of their class-based prejudices. They don't want to live or associate with people without money, and that prejudice excludes a lot of Black people. The target of their disdain, though, is working class whites.

Democrats have a real electoral problem with wealthy leaders, surrogates, and activists, who themselves live in white enclaves, claiming working class people are racists--even though, in many areas (including Spokane, Seattle, Portlandia, Hollywood, San Francisco, LA, DC, and greater New York), the most diverse neighborhoods, public spaces, and workplaces are actually working class.

Imagine if Hillary's prejudices hadn't prevented her from spending as much time campaigning in, say, rust-belt Wisconsin (where she spent exactly zero days, while Trump campaigned despite ridicule) as she spent fund-raising among white elites in Connecticut, Rhode Island, or other wealthy Democratic strongholds with relatively few electoral votes up for grabs. The Democratic campaign was both strikingly skewed along class and racial lines, with the result that white neighborhoods that had gone to Obama voted for Trump, and voters in Black neighborhoods stayed home.

McMorris Rodgers is at least correct that a diversity of views is more important than a cabinet that "looks like America" as Bill Clinton put it (first, I think). But it's hard to see much diversity in Trump's picks. Kind of racist versus less-racist, with Priebus as a cherry on top of the shit-cake.

But, does it matter as much as our disgraced media claims? The election was really just Trump versus the Republican Party all along, not Republicans versus Democrats, or even alt-right versus the establishment. Trump won. I don't really see him beholden to anyone; neo-Nazis and RNC alike are beholden to him. Will he defer to anyone's judgment in his executive? Or will his administration resemble the ad hoc chaos of his campaign, with family and cronies wielding the actual power, and opportunism and personal score-settling triumphing over ideology? I'd wager the latter, making this transition all the more surreal.

I think we're back to the Hitler comparison. Here's my try: The Nazi regime increasingly consolidated around an irrational racist ideology based on Hitler and Goebbel's sincerely held delusions, but these delusions allowed corruption to flourish and private power spheres to flourish among opportunistic (and often less ideological) followers.

I think Trump may be the mirror image: Personal corruption from the leadership that allows racist ideology to flourish among lower-level ideologues (perhaps led by Pence).

IF so, Progressives need to find some sort common ground with the alt-white nationalists of the Democratic Party who hate us, and the working classes, more than they oppose Trump.

Progressives must now decide whether to remain outside the Democratic Party while seeking that common ground--or take over the party's machinery and kick out Wall Street neo-liberals for good, ironically saving the party from the consequences of its own bigotry.

Whither the Democrats, or wither?

It looks like the "diversity" in the corner may just work there. He doesn't seem interested in being in the photo itself.

I think wither, Ha-Ha. The Democratic Party showed it is a party for the upper professional classes and celebrities, and a good portion of the top 1% and Wall Street. Democrats use ethnic minority and working classes votes cynically for the benefit of this wealthy elite. Any reform will likely prove to be shallow. Listen to the DNC and Congressional leaders--they still don't get it. Repeal the Electoral College? Oh please. You still have to win an election first.

The Democrats real chance to prove their bonafides was in 2008-2010, and they blew it. They've been losing statehouses and national, among whites and minorities, and men and women, ever since.

Here's the Democratic platform we will never see: A trade deal that absolutely forbids trade with any country that does not pay its workers a minimum of $15 an hour with a real international currency standard, and allows trade only with countries that have the same or better labor, organizing, environmental, and safety regulations as the U.S. Let me know when elite Democrats back a race to the top, rather than the bottom. Let me know when they no longer dismiss anyone who criticizes their neo-liberal class discrimination as a racist or misogynist.

The real racists are those who think its ok for Bangladeshis or whoever to work in dangerous sweatshops so Wall Street can enjoy greater quarterly profits without risk. That's the Democratic Party in a nutshell. And yes, the Republican as well.

Americans will continue to boycott the electoral process.