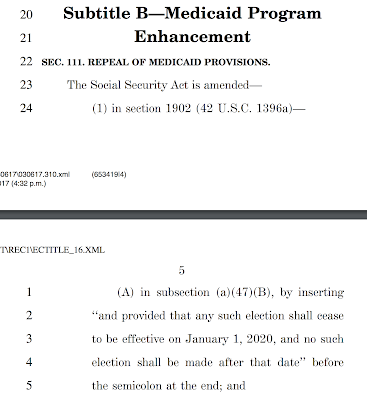 So basically, this section could have been titled, This Is Where We Screw The Poor.
Posted by Hank Greer at 5:59 AM

This is where we create a new Democratic majority.

Republicans have sacrificed their one rhetorical advantage: simplicity.

Nobody knew a Republican plan could be so complicated!

Apparently Republicans think defunding voters healthcare is a winning campaign issue in 2018 and 2020.

This bill angers everyone, even wealthy opponents of the ACA. It's still basically Obamacare, just with much less money. It even freezes in place the 31 state Medicaid expansion, like some sort of Missouri Compromise of insurance coverage.

This application of leeches to the ACA will serve only to rebrand the whole rotting mess "Trumpcare." Republicans cannot argue, like some 19rh century quack, that the patient would have died anyway.

I expect Senate Republicans will recognize the political toxicity of this bill. But what will the second draft look like?

Trump will need a megaton distraction if his Trumpcare thrust wilts while everyone watches.

Trump is, by any measure, a loser. Sad? Dangerous, actually.

Trump just gave himself a two week deadline to produce wire tap evidence. If he can't meet his deadline with credible proofs (and he won't), Congress must write up his false accusation as a misdemeanor, if not a high crime.

I don't give a damn. I'm joining the impeachment crowd. Time to shortstop Trump's presidency.

I keep imagining an alternative history, one in which Trump silently acknowledges his defeat in the popular vote and lack of a personal mandate. This fantasy Trump realizes the election leaves his power conditional on Congress (and the courts), that he must build new coalitions, or be at the mercy of any given Freedom Caucus Congressman from a podunk district. This Trump also sees new possibilities.

On the morning of Day One, Trump announces his choice of Merrick Garland for the Supreme Court. This move is a win-win-win for Trump, angering the right people, undercutting the media and Democrats' narrative, and sending the signal the President will make hard bargains. He tweets "It's time we move past the acrimony of the past and attend to the people's business." (Let Priebus write it.)

In the afternoon, he challenges Congress to send him a plan to replace Obamacare, but announces he will refuse to sign any bill that does not expand Medicare access to Americans under the age of 35. He tweets "The Americans who pay for Medicare through their payroll taxes need to start sharing in the benefits of the program." Here, Trump leverages his base, and the government's most popular program, and inverts generational tensions to his advantage. Boomers and millenials would see the advantages, Trump joins his base to the Bernie base, undermining the DNC and RNC elites. Now Trump controls both sides of the conversation. Nixon goes to China.

Trump then tweets "We will build a wall. But the lying media forgets that I also called for a big beautiful door. You might call it a golden door! The most golden ever!" Bannon goes to Mexico.

Trump could have pulled off the greatest pivot ever, and created the greatest realignment since FDR, or even the demise of the Whigs.

Realignment is still conceivable, though a longshot.

Trump's rhetoric is already alligned with the Democratic base on trade, infrastructure, stimulus. These issues are fodder to attract new Congressional coalitions.

But the media and his dumb advisors have goaded him into betting on Ryan's dubious and arcane tax debate. A win for Ryan's elitist plan would be, at best, a further loss for Trump's popularity.

Agree about Ryan-plan as liability; disagree on taxes.

If we can imagine a Medicare-expanding Trump, we can imagine a Trump who attracts Democratic Reps by cutting lower/middle-class tax rates and increasing the standard deduction. That's half the battle toward a return to a pre-Reagan progressive tax structure. Also, lower/middleclass tax cuts usually do have a stimulatory effect, since these people spend.

That said, there is also a Progressive/conservative argument against the current complex deduction regime, since it primarily benefits the wealthy who itemize and have accountants/lawyers. (And no one knows better about the loopholes than Trump himself, as he's reminded us many times.) Even the hallowed mortgage deduction is a back-door tax on renters, who skew toward poor and/or urban.

I just can't see realTrump as able to realize his political interests have diverged from those of his class. He's no FDR. He's also no Andrew Jackson, despite Hermitage posturing. Jackson was elected to both Senate and House, and served as a justice, and in the military. Unlike Jackson, Trump seems clueless about what a President can and can't do and what he can get away with, and how to translate populist rhetoric into actual actions. For crap's sake, Jackson basically invented the Democratic party as a populist vehicle.

Trump is a nobody, a ghost, a political spook at best.

And for that, we should probably be very grateful.