On the second day, we finished up the last nine miles of rail trail and switched to gravel and forest service roads. 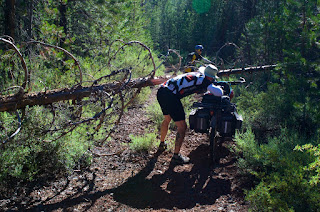 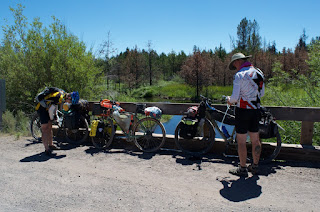 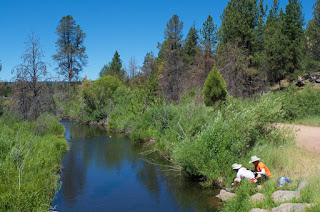 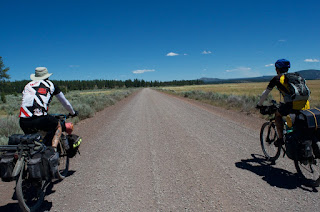 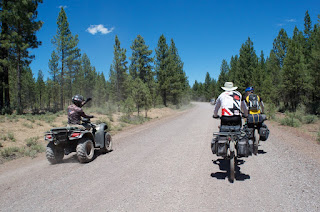 We stopped in Silver Lake for a bite. I don’t recall how the subject came up but our waitress politely mentioned there were showers at the RV camp. It was only our second day of 90+ degree weather and I guess our presence was noticeable. It felt good to be clean for a short time. 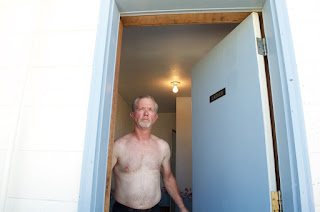 Hey, a shower is a shower regardless of what the door says.

We lounged in the shade with the camp managers—small world moment—whose son happens to be a lieutenant in the Spokane Fire Dept. 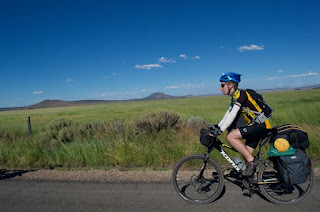 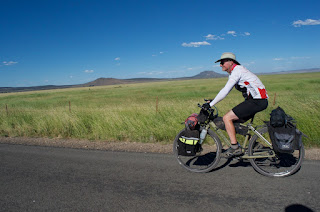 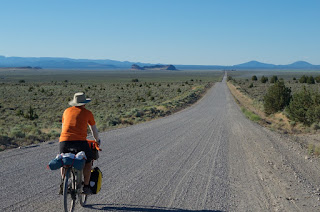 Fort Rock is the dark formation ahead on the left.
It's still miles away.

We pressed on to Fort Rock. Fort Rock State Park was visible several miles away and it seemed we rode forever to get to it. John said it was like the Las Vegas strip. The casino is right there but after walking a mile it’s still another two miles away.

Ike barked a warning as we entered the Watering Hole Tavern in Fort Rock. After a perfunctory sniff he allowed we could stay. Maybe the showers helped. We enjoyed draft beer served in iced mugs with our meals. 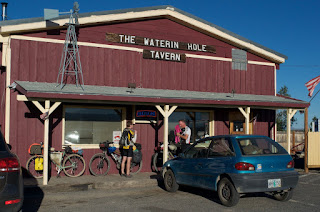 The tavern owner gave us permission to camp in the parking lot across the street but we had our eyes set on a much more comfortable lawn at the community church. Unable to contact anyone from the church we asked a neighbor if she’d think they’d mind if we pitched our tents on the lawn. “Of course, not,” she said, “They’re church people.” Then I asked if there was a problem with the church, could we pitch our tents in her yard. She became a little guarded. “Well, when would you leave?” I assured her we would be out of her hair in the morning as we planned to have breakfast when the Watering Hole opened at seven. She was okay with that. 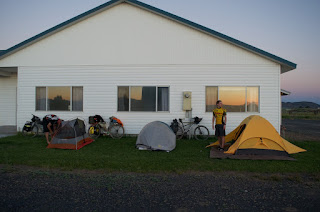 The lawn at the church was one of the few spots we saw that had a sprinkler system. Hence, it’s strong appeal as a cushioned spot to bed, something I needed because my sleeping pad had a slow leak. We turned the sprinkler heads to face the opposite direction.