This was our second time at Riverside State Park. Saturday's heavy rains made sure the course was in excellent condition for getting dirty while racing fast. The mud was firm but flying off the knobby tires. The standing water made for some good photos. I went with regular knobby tires instead of the mud tires since I knew the ground is almost always firm out there.

I signed up for the single speed and the men's masters 50+ races again. My sister, Barb, came out for the first race and agreed to take pictures of everyone so that was cool of her. At the start I noticed how everyone was pulling away from me even though I was spinning like crazy. About halfway along the straightaway I heard a CRACK! Something happened to Andrew Ackerman while he was going through a large puddle. He and his bike slid into a tree. Fully baptized in mud and only slightly wounded, he got up and worked his way up. Even though I had intended to take it easy I found myself working harder than I planned. There's something about having someone just ahead of you and you think, "I can catch them." I reeled in one guy and battled with him for a lap or two before leaving him behind. 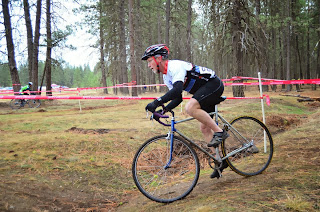 Then I caught up with Jessica Sterner. She and I went back and forth for three laps. I'd get ahead of her in the technical areas and she's catch and pass me on the straightaways. On the last lap I cranked on the straightaways and kept her behind me. My plan was to increase my lead twisting and turning through the woods and hopefully I'd have enough room to beat her on the last straightaway to the finish. The first turn that takes you back into the woods is off camber going to the right. I pedaled through it and caught my pedal on the ground. That lifted my front wheel for a moment. When it came back down my weight had shifted to my left and I rolled it and slammed my left knee into the ground. Jessica wasn't that far behind me. As she went by she told me to get back up and catch her. I collected my wits, found my inventory was complete and I wasn't injured badly, and set off in pursuit. I could not catch her. But we had a good battle going there for three of our six laps.

After the finish I noticed blood oozing out from the dirt packed into my knee so I had it checked out. It looked worse than it felt. Lucy bandaged me up and I was set to race again after 3-1/2 hours of rest--if you call walking the course and taking pictures for the next three races rest. 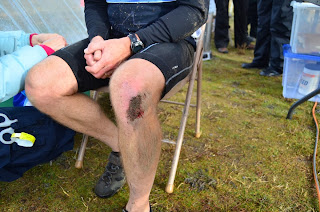 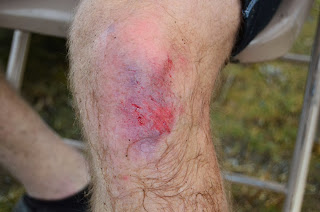 I was happy to have gears to choose from in the men's masters race. I wasn't feeling low on energy from the single speed race so I pushed it when I could. For three laps I repeated going back and forth with another guy. I'd pass him on the technical stuff and he'd pass me on the straightaways. I passed him on the run up, spotted a dollar bill, and whacked my helmet on my handlebars reaching down to grab it. Then I was focused on trying to put the money in my jersey pocket when that guy passed me again. Finally he took off. Or I slowed down. I caught up with a couple other riders during laps 4 and 5. (And I scored another dollar hand up on the run up!) One guy I caught was from the 40+ group that started before us. He was on a fat bike. He was cornering like he had no worries. And he didn't because he was on a fat bike. Anyway, you should plan ahead when you want pass a fat bike. Get behind one at the wrong time and those fat tires are flinging all manner of sand and mud in your face.

I had two more laps to go after leaving the fat bike behind. Then I noticed he was gaining on me. Like a rat abandoning a sinking ship he was tearing up the course trying to avoid getting passed by the race leaders. Well, he caught up to me about the same time as the leaders so we both wrapped it up at six laps. I was okay with that since I was beginning to flag anyway.

Next week's races are up on Greenbluff. Maybe we'll get some snow like last year.
Posted by Hank Greer at 7:25 PM

Good job Hank. Better keep an eye on Craiglist for the single speed you're not looking for. :) Hope your knee heals up without any long term issues and way to push the envelope.