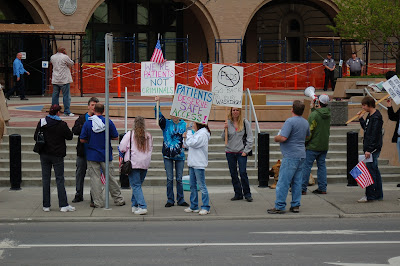 Chants of "DEA. Go away!" and others of similar vein rang out outside the Federal courthouse for much of the day today as a small but boisterous group protested the recent raids on the medical marijuana dispensaries. A couple of SPD patrol cars stopped by for a few minutes. Lots of passing cars honked horns in support. Heck, even Harpman Hatter showed up and played.

No need to rehash everything on this because even if state law was explicitly clear, it is trumped by federal law which lists marijuana as a Schedule I drug. And drugs are bad. M'kay?

Here, according to the Controlled Substances Act, are the characteristics of a Schedule I drug:

State law on medical marijuana dispensaries continues to remain ambiguous, in part thanks to Governor Gregoire's partial veto of S.B. 5073 (PDF). One would think that it wouldn't matter anyway, but I beg to differ. If enough states legally establish medical marijuana and there's enough evidence for its medical use, then it would make it easier for it to be moved to Schedule II where morphine resides and where alcohol should be. (I'm not against drinking alcohol, but I've seen what abuse can do. It has a high potential for abuse and can lead to severe physical dependence.) I think Schedule III would be a better fit for marijuana, but I also think that if we can be trusted to purchase, consume and even make (to some extent) alcohol, then we should do the same for marijuana. While it's true anyone can abuse any drug, marijuana is not nearly the demon alcohol is. 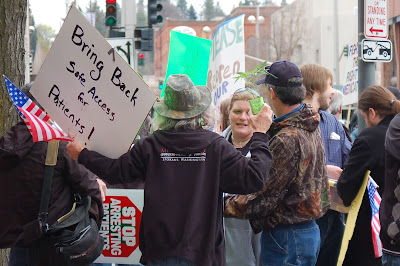 And if you're concerned that marijuana is a gateway drug leading to abuse of more dangerous and addictive drugs, take a moment to consider that even milk can be a gateway drug.