Apple Cross, hosted by the Zusters, was held last Sunday at Walter's Fruit Ranch up on Green Bluff. The weather was cold and rainy, the course was muddy and nearly every turn is off camber. It doesn't get any better than that. I sputtered out of the chute for the single speed race at 9:00. The heavens opened and drenched us. The mud plastered onto me and the bike and made the bike feel 20 pounds heavier at the barriers and the run up.

Two and one-half laps in I was wondering, "Why is this so hard?" I was really struggling. My progress was not matching my output and I was having a tough time. Shortly after starting my third lap I hit a real soupy part of the course and I could feel the ground really well under my front tire. And I mean really well. I had flatted at some point but didn't notice since the course was so mushy. The extra front wheel sitting in my van wasn't going to do me any good so I just took it easy and made sure I didn't peel the tire off the rim, which would have forced me to walk. The race leaders passed by me on my fourth lap and I was thankful for them ending my race for me. I washed my bike off and changed out of my muddy kit into some dry clothes so I could take photos of the next couple of races.

Two hours later I put my muddy kit back on and lined up for the men's masters 50+. (My extra wheel set was in the pits.) I had a good start but my depleted energy level made itself evident by the time I hit the run up. I focused on technique and worked the turns as best as I could. I saw I was reeling in a couple of riders ahead of me so that was encouraging. I went down once when I pushed a turn too hard and I got hung up on a course marker trying to take a turn too tight.

The Bike Hub crew set up camp next to a particularly treacherous set of muddy serpentine turns. On two of the laps my friend Brian gave me a beer hand up. That forced me to maneuver through the turns one-handed while I tried tossing down the beer. I'm happy to say I was successful both times.
On one of the laps someone at the top of the run up had a can of whipped cream."Hey, Hank. Want some whip?" 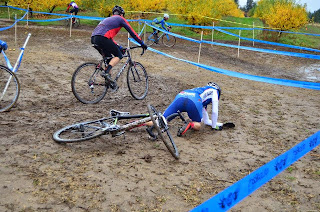 What the Bike Hub folks saw all morning.

"Sure," I said and opened my mouth as I tried to maintain something I hoped would pass for a running effort. Things didn't work out as planned. She hit my lip with the tip of the can and then sprayed whipped cream all over my goatee. It was pretty funny. After the race someone asked if I was okay because I had blood running down my chin. So not only did I not get any whip, she drew blood. That's cyclocross.

I did all my laps and got in line after the finish to get my bike washed. Props to the guys at This Bike Life for bringing bike stands, buckets and brushes, and standing in the mud and water as they removed mud with water. Sometimes from riders, too. 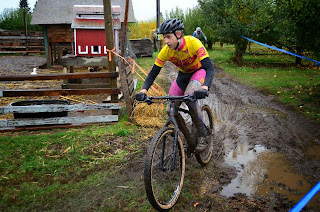 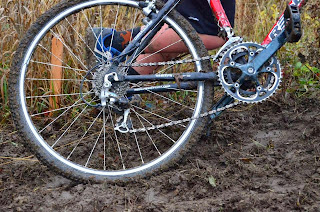