Kathy and I headed down to Walla Walla for the weekend with our friends, Bob and Donna. Bob and Donna recently celebrated their 30th anniversary and Kathy and I have our 35th on June 29th. We had two goals: ride our bikes and taste some wine. With the high temps in the low 100's we got up early and hit the road by 6:00 am each day. There is some beautiful country down there. We rode south of town and into Oregon through wheat and wine country. 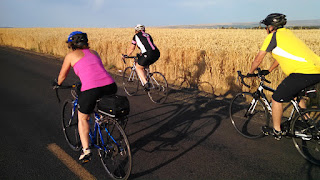 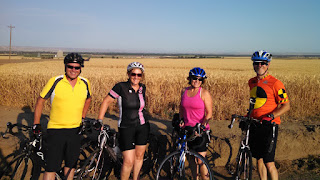 Lucky for us some other cyclists came by and they took a group shot. 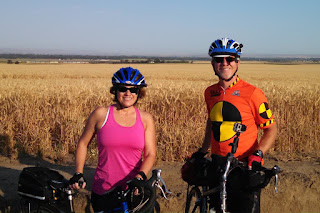 Halfway through our first morning ride we stopped in Milton-Freewater to take a break in the shade right outside the Palm Tavern. No sooner had I leaned my bike up against the building when the loudest diesel pickup truck I ever heard pulled up. The driver turned off the engive so we could hear him talk.

"I'd appreciate it if you wouldn't lean your bikes against my building." 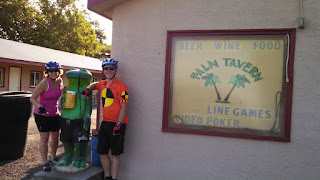 I checked the directions for the rest of our ride with him and he was off. We felt compelled to take photos of ourselves with the beer drinking frog out front. By the way the Palm Tavern is for sale. And there are no bike marks on the front of the building. Not that you could tell anyway. 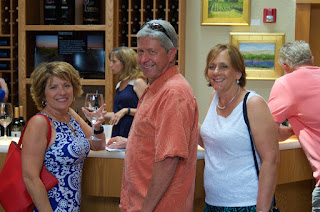 The ladies who own the bed and breakfast we stayed at, Woodhaven Inn, recommended a number of wineries for us. We managed to check out six wineries on Saturday. A tasting at each one involves five or six wines. At dinner that evening, Kathy actually said she didn't want to have any more wine. That's not the Kathy we know. Thankfully, she got out of her slump. 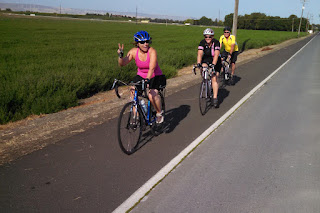 Sunday's ride was shorter than Saturday's. We wanted to get back earlier so we could get properly cleaned up for breakfast. And it was hotter. By 8:00 am the temp was in the mid-80's.

Breakfast at Woodhaven Inn was incredible both mornings. It was a shame to be so hungry and then scarf down a plate of food that looked too good to eat.  I apologize for not taking photos. 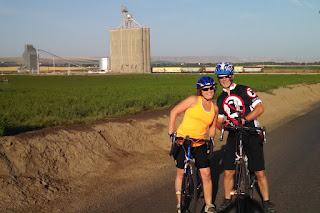 After breakfast and checking out of the B&B we headed out for more wine tasting. As luck would have it, at one of the wineries this guy was showing off the Self Balancing Unicycle. He and his partner had been on that Shark Tank show and apparently got a deal for some financial backing. I have no idea what he was doing at this particular winery but I couldn't pass up a chance to ride it. 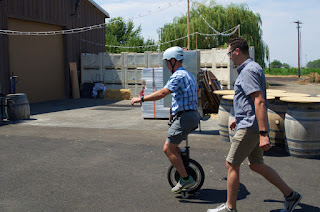 I watched a couple of younger guys try it out under the tutelage of the entrepreneur. I paid attention to what they did and the directions they were being given. When I got on I took off and the guy kept telling me, "Not so fast. Not so fast." And he was keeping a hand on me because he was concerned I was going to crash. Turning with the training wheels was challenging. I was trying to lean into the turn as if the wheels weren't there and that doesn't work well at all. But I could move along just fine. The guy asked if I had experience riding unicycles and I told him I did not. I also told him that he didn't need to hang on to me. He said he did for safety and liability reasons.

The electric unicycle cost $1800. For that amount you can also get a decent bike to commute with. You're not limited by battery life and you don't have to recharge it. It is fun to ride but I can't see one showing up in my garage. 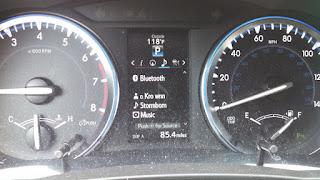 As everybody knows it was hot as blazes this weekend, Here's a shot of my car temperature when we stopped in Pasco for a late lunch. 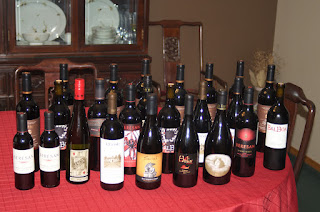 These are the bottles of wine Kathy picked up yesterday and today that she's keeping. She has eight more that she's giving away as gifts to people at work. I think we did our fair share of supporting the Walla Walla wine economy.
Posted by Hank Greer at 9:49 PM