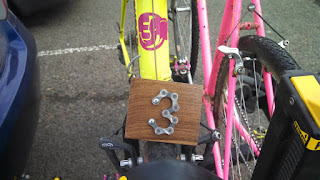 Truth be told, though, this is hardly a testament to my prowess on the single speed. Racing the single speed is hard and I'm not nearly as strong as the other racers. I'm in it for the fun of riding the course. I like to get two races in and doing the single speed allows me to have a two or three hour break between races.
Posted by Hank Greer at 4:38 AM