I made a frame bag, gas tank bag, and a porteur bag for my Elephant NFE and used them on the Idaho Hot Springs Loop Mountain Bike Trail. How did they do?

The gas tank bag worked great. I'd like to make it a little taller and a touch longer even though it intrudes into my stand over space. The zipper opening was exactly the right length to get my glasses case and phone in and out, which means it was a snug fit. It would be a problem if you were in a hurry to get the case or phone in or out but when you're bike packing, what's the hurry? The bag also carried a small notebook, pen, folding knife, and DEET spray.

The only thing I need to do with the frame bag is make sure I pack it properly. I had stowed a small tupperware container full of chamois cream in the bottom of the bag. The contents shifted during the first day. I heard a rhythmic thump while pedaling that I thought was coming from my bottom bracket. It turned out the crank arm was hitting the bag where the tupperware container was pushing outwards. That was a quick fix and I had no more problems with it but it did damage the bag. The bag also held a Tyvek ground cloth, a rain fly, a 3-liter water bladder, a water filter, and an extra 2-liter bladder that I usually filled and used at a camp sites.

The porteur bag held up and worked pretty well during the trip, but it could use some improvement. I was concerned about the mounting straps because I felt too much play resulted in the way I attached the straps to the nylon material of the bag. Nothing tore and I didn't see any damage, but the bag really bounced on the frame when hitting all those ruts, wash boards, holes, rocks, etc. Maybe that's normal behavior for a porteur bag. But maybe I could snug it down a little tighter. The velcro strips I put on both sides and the back held the lid on and never gave out. Nothing bounced out of the bag but the way it was shaking on a lot of those rough forest service roads, you'd think the contents were going to bust out at any second. I sewed a clear vinyl piece onto the top of the bag with the idea the map and my phone could sit underneath them. But the space between the pliable nylon and the vinyl was too loose so anything under the vinyl would start working its way out during the ride. The cue sheet was the only thing that would stay. Plus, when the sun was high the clear vinyl would reflect the sunlight into my eyes. 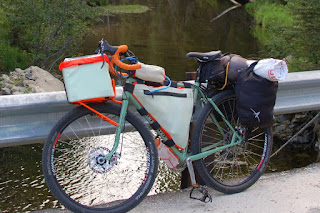 Looking fresh and new on the first day. 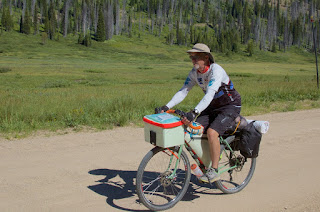 Aesthetically pleasing except for the black velcro on the front. The cue sheet under the vinyl top was easy to read good except when the sun was high. 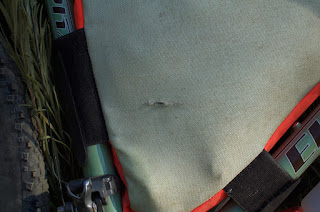 The crank arm was striking the slightly bulged out part and damaged the bag. 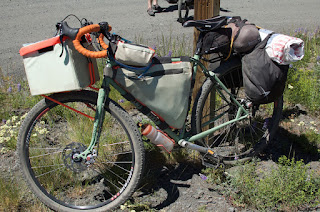 Starting to show some use. 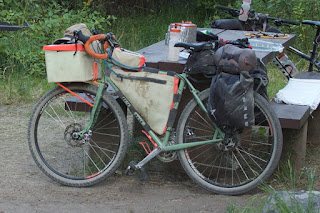 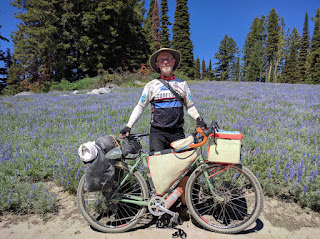 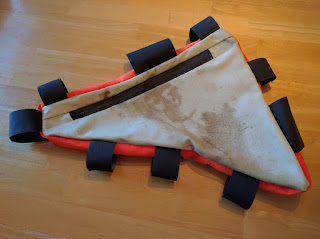 The down side of a light-colored bag. The dirty spots are easier to see. 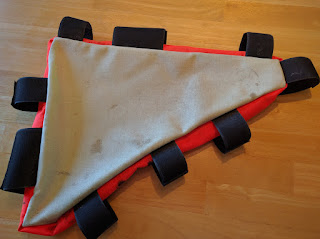 But this bag is a keeper. 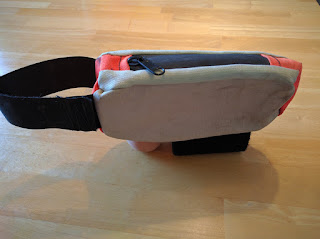 I didn't do a practice gas tank bag so this was kind of that, too. I attached two sides of the velcro straps backwards. Rather than take everything apart I just cut the straps, flipped them over and sewed each one to its reversed partner. 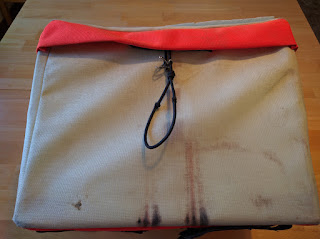 The elastic cord used as a backup for holding the lid closed quickly started wearing and fraying where it looped around the rack. I'll substitute shock cord and see if that holds up better. 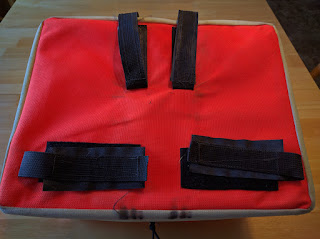 I had two velcro straps on the back of the bag that went around the sides of the rack. 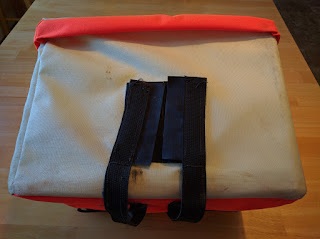 And two straps that went around the middle cross piece of the rack and then forward to the front side. 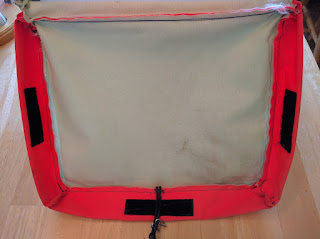 Velcro strips on each side of the unattached lid. 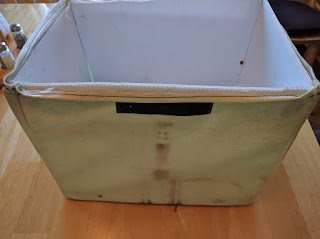 Back of the bag where it opened from. 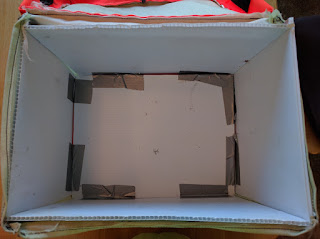 Coroplast lined to give the bag shape and structure. Duct tape to hold the pieces in place. I used a trash bag liner so no small bits would fall through the cracks. 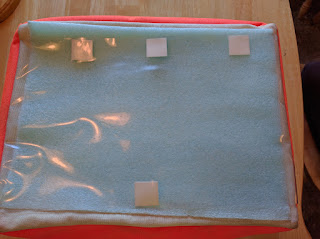