This week I loaded up the NFE and rode it to work on Thursday and Friday. Yesterday I took it for a spin on my favorite gravel hills on Kronquist. While on pavement I noticed a slight back-and-forth wobble on the front end. I couldn't find anything mechanically wrong so I emailed Glen and John at Elephant Bikes. The NFE is designed to have most of the weight up front and John recommended I go with the low racks and panniers. I have less than two weeks before I hit the Hot Springs Loop and I've spent enough money and the issue is noticeable but not unnerving. So I'm going with my current setup. 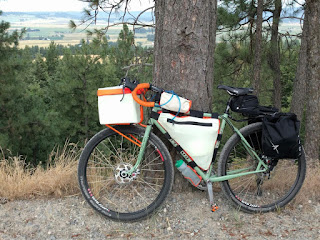 Interestingly, I had removed a couple of pounds from the rear panniers before yesterday's ride and I did not notice the swaying. I'm going to take another look at how I'm packing things up and try to get more weight up front. 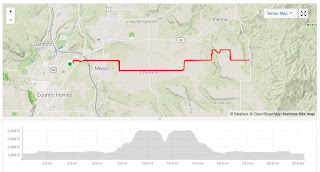 The NFE climbs so nicely even when it's loaded down. I was in the crawler gear for the steep parts but it was always steady progress. Going west on Farwell from Forker--the center of the Rorschach test-like diagram showing the elevation--the road is pretty darn steep. I was making good progress and putting out a substantial effort. When I'm pedaling hard like that I tend to forget to relax my upper body and instead pull on the handlebars. That causes me to swerve a little back and forth. On one such swerve the front tire went into some deep gravel and then slid out from under me. So it was walkies until the road leveled out some. Pushing the loaded bike uphill felt like it took more effort than riding it.