The Importance Of Education 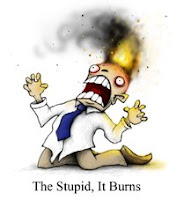 No need to go to all the trouble of buying a mail order diploma if a Texas legislator has his way. State Representative Leo Berman has proposed a bill that would allow private, non-profit educational institutions to be exempt from the authority of the Texas Higher Education Coordinating Board.

From the Fox News link:

HB 2800 does not specifically name ICR (The Institute for Creation Research); it would allow any institution that meets its criteria to be exempt from the board's authority. But Berman says ICR was the inspiration for the bill because he feels creationism is as scientific as evolution and should be granted equal weight in the educational community.

“I don’t believe I came from a salamander that crawled out of a swamp millions of years ago,” Berman told FOXNews.com. "I do believe in creationism. I do believe there are gaps in evolution.

So it really is all about education. But not everyone is on board with this.

“This would open the door to other fly-by-night organizations that come in and want to award degrees in our state, because the bill is highly generalized,” said Steven Schafersman, president of Texas Citizens for Science.

“Right now, we don’t have this problem in Texas. Texas is not a center for degree mills, because our laws allow only the Texas Higher Education Coordinating Board to approve the granting of graduate degrees.”