I stopped by four of the Energizer Stations this morning to get pictures of customers. The Five Mile Park 'n' Ride, manned by Women On Wheels, was first on my list. They had homemade goodies! Two cyclists showed up right at 7:00, grabbed a quick snack, and then headed up the hill to work. While I was there I saw a couple of cyclists ride by without stopping. 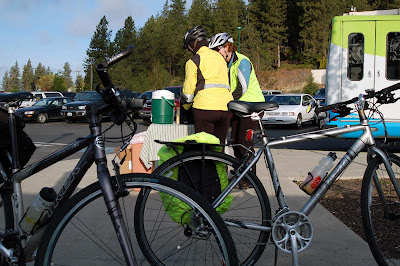 It's impossible to predict who and how many will go by let alone stop at any station. After all, stopping requires a change in your departure time if you can't change your arrival time to work.

There was one cyclist at Coffee Social. She told me she had also stopped by the station at the Greene Street Bridge and found it was manned by an energetic volunteer. REI was a bit slow but had plenty to offer. Coffman Engineers and Winston & Cashatt outside the Bank of America building had the most populated station with plenty of cheerful people braving the cold wind. Unfortunately, we also saw cyclists ride by. Desperate for a photo op I caught the attention of a passing cyclist and waved him over. He agreed to stop for a minute even though he had to get to work. 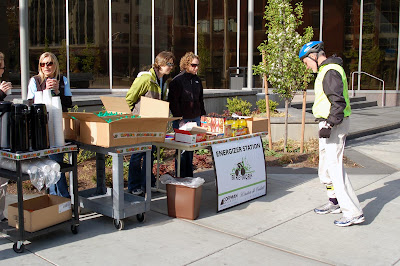