Our Very Own Compassionate Conservative

...McMorris Rodgers earned some of her loudest cheers by challenging the notion that millions lack access to health care, repeating President George Bush’s infamous soundbite "[anyone] can still get care if you go to an emergency room."

That statement really bothers me. Not only is it BS, it also ignores some realities. If you go to the ER and you have insurance, you can bet that the insurance company will pay the hospital less than the amount billed. If you don't have insurance, then you are billed in full. If you can't pay then you may be dealing with a bill collector, absconding or the hospital writes it off. Regardless, the hospital now has another loss to absorb. And they can only absorb so much.

If you have a significant medical condition and your insurance runs out or you are dropped because of a pre-existing condition, you are hosed. Emergency departments do not provide long term treatments such as chemotherapy for uninsured cancer patients.

The emergency room has a specific purpose. It didn't get its name from providing routine medical care. In 2007, the Washington State Hospital Association did a study of 2006 emergency room visit data to determine if visits were for emergent care. Here's a chart showing the percentage, by age group, of visits considered to be non-emergent. 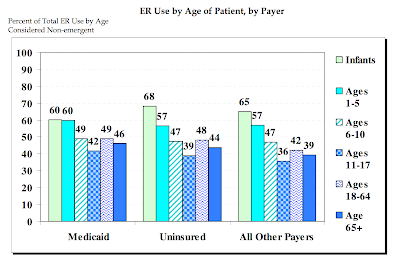 As you can see, people have already been going to the ER.

McMorris Rodgers struggled with the first question from the audience, though, stumbling over a polite yet confidant 70-something woman’s question of whether "health care is a right or a privilege." After searching for an answer for several seconds, Rep. McMorris Rodgers dodged it, and simply said: "All Americans should have health insurance."

A nice sentiment. Right along the lines of something like, all Americans should win the lottery. In Washington, the uninsured is not a new problem. McMorris Rodgers and her party have offered nothing, absolutely nothing for the unemployed, those turned down for insurance, those who can't afford the insurance their employer offers and those saddled with higher premiums. And as far as the costs of medical care goes, it's not like there haven't been any
indicators of a problem there.

McMorris Rodgers claims to be concerned about the government competing with private insurance companies. Yet the private companies do not compete by attracting new customers. They do so by ridding themselves of customers who cost them money. Shareholders and Wall Street are not interested in providing health insurance. They want to see a bottom line that's going up.

Will Canine, a student activist at Whitman College, pointed out that "McMorris Rodgers’ interests clearly lie with her insurance company donors." McMorris Rodgers’ top donors for the 2008 election include Blue Cross/Blue Shield and the National Association of Retail Druggists.

McMorris Rodgers’ top twenty donors since her election to the House in 2005 include the American Medical Association and Blue Cross/Blue Shield, who have each donated over $20,000 towards her reelection campaigns.

Her top donor is the anti-tax Club for Growth, at just under $90,000 in contributions. The Club for Growth made news recently by launching a $1.2 million campaign to "highlight the dangers of government-run health care" through television ads that many have called misleading.

Money talks. And if you don't have any. Well, you already know.
Posted by Hank Greer at 7:12 AM

The sad thing about that chart is that most of the non-emergent care went to children. Washington State provides coverage for all children under the age of 18 under the Healthy Options program. Also, in Washington we have Basic Health, which is cash-strapped right now, but provides VERY affordable health insurance on a sliding scale (by income). My wife and I got our coverage through that for years for about $100 a month. My son still gets coverage through Healthy Options, at no charge. It was/is decent coverage. Why can't we come up with a system like this across the whole country? During the whole time I got coverage through Basic Health I had the option of purchasing employer coverage, but it was much more expensive than Basic Health. There has to be a way to make it work.