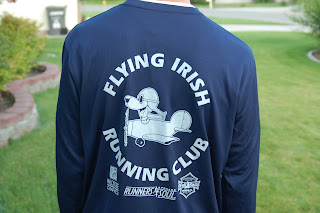 Last night Josh received his shirt from the Flying Irish Running Club at O'Doherty's. After six runs, you get to stand on the bar and tell an Irish joke and pay $10 for a very nice dry-fit shirt. Wearing the shirt gets you a 50% discount off food and drinks after the run. I received my shirt a couple weeks ago. The joke I told was rather long and hard to follow since a lot of people in the place were talking. So from that Josh decided that it's best if the joke is short and sweet. And to cheers and high fives, here is the joke he told.

An Irishman walked into a bar and the bartender, seeing something odd, says, "Hey, you have a steering wheel on your pecker."

We LOVE O'Doherty's--get there far too rarely. DH will want the tee shirt now, too.

The way I heard that joke: "Hey, you've got a steering wheel hangin' from your belt?"...[same punch line]

One of our kids' favorite jokes now that they're 8 1/2: "She was only the stableman's daughter, but all the horsemen knew her."

BTW, do people at work know that you stand on bars and tell jokes??