Barefoot Running - Out Of My League

Josh and his fellow distance runners on the Mead track team had a 1500 race just for fun today. As if you could call that fun, but that's another subject. A couple days ago I asked if he'd mind if I ran, too. Not a problem as long as I didn't get in the way. (That meant I was to move aside when they were lapping me.)

Thirty minutes before we were to go to the school the weather made it look so inviting. 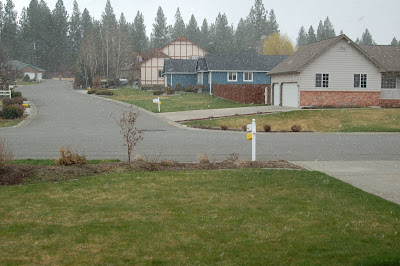 Josh said I should wear spikes because they'd help me run faster. I declined and went with my aqua sox. 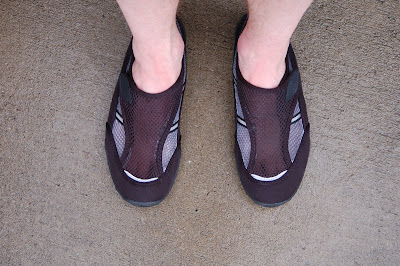 No, I'm not intentionally trying to send a fashion statement.
I've run barefoot on the track before and found it very uncomfortable. Yesterday I did 3.5 miles in the aqua sox and it was quite nice. I did the warm-up run with the boys and that gave me a good idea of what I was in for. Their warm-up pace was a touch faster than my regular running pace. So while they're talking and joking I'm trying to keep my breathing quiet so they don't think I'm going to die. Still, they slowly pulled away from me. I only caught up when they all stopped in a grove of trees to pee. I thought it was funny that that is a regular part of their warm-up.

After stretching we formed up at the start line and I told everyone to just yell "track" if I was in the way when, not if, they passed me. At 35+ years older and being just as many pounds heavier than these high school runners I had a pretty realistic picture of how this run was going to go. And I was right. The coach yelled "Go" and we were off. In 200 meters I was already 20 meters behind. Everybody lapped me during my third and their final lap. I finished in 6:36. Josh's time was 4:15. Go Josh!
Posted by Hank Greer at 5:38 PM