They Grow Up So Fast

It's always a pleasure to watch my children do what they love to do. Josh competed in the 1600 meter race at the Mead-North Central track meet last Thursday. North Central has one of the strongest distance running programs in the country. 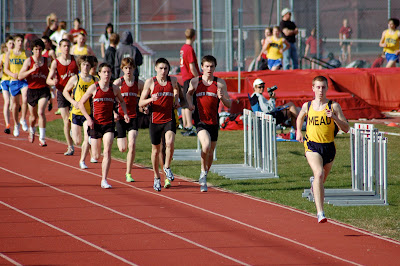 The NC runners boxed everyone in during the first lap forcing a snail's pace of 72 seconds. Josh didn't like that and ran around the group trying to force a faster race. As you can see from the looks on the NC runners, they were not concerned. Their top two won the race with Josh's teammate, Andrew Gardner, (barely visible behind the first two NC guys) and Josh coming in third and fourth.

Yesterday the Mead boys competed at the Pasco Invitational where they won the team title. 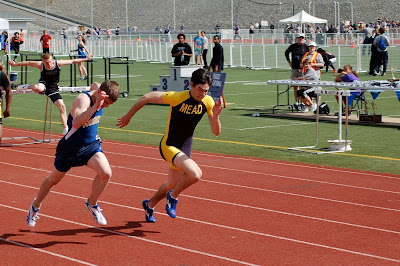 This is Josh's long time friend from elementary school days, Casey Monahan, squeaking out a victory in his heat of the 110 meter hurdles. Casey ended up fifth overall.

Both Josh and Steph have been going to elementary, middle, and high school with the same friends respectively. That may sound normal to you, but I grew up in a military environment where I moved every couple of years, so I can't relate to it. Seeing how much their friends have grown over the years really emphasizes how much Josh and Steph have grown. Kathy and I can remember young Casey's face lighting up with a big smile when asked, "Would you like a popsicle?" Yesterday, when Kathy told Casey, "Good job," a deep voice replied, "Thanks."

Next fall, Josh starts college and Steph starts high school. Where did the time go? These four years until we become empty-nesters will probably pass by in a blink of an eye.
Posted by Hank Greer at 6:29 AM

Hank, my (older) kids are still friends with kids they WENT TO PRESCHOOL with.

It's good that only the KIDS get older, not the parents.