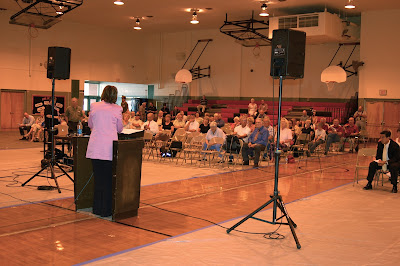 Congresswoman Cathy McMorris Rodgers held a town hall meeting in the largest city in her district and barely 150 people showed up. No television cameras and I'm not sure there was any press at all. On the other hand, Daryl Romeyn, who is running against McMorris Rodgers sat down near me. More on him in another post. The few people that did attend were primarily older citizens. No young people at all except for the Boy Scouts who posted the colors at the beginning. 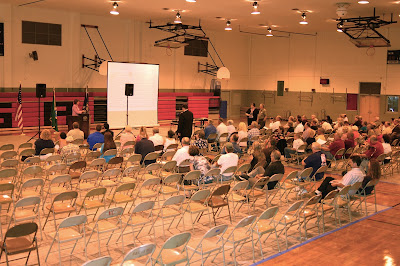 A ticket system was used to determine who would get to ask a question or two. You dropped your ticket in a barrel and kept the matching half. 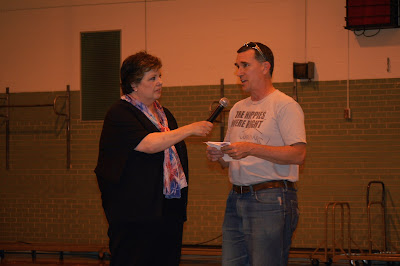 If your number was drawn you stepped up to the microphone. If not, then you could still talk to the congresswoman or her staffers afterwards. 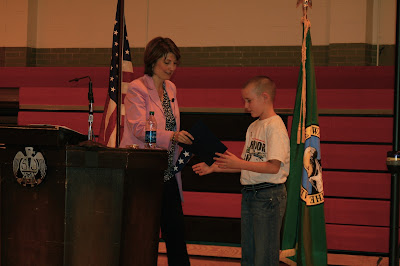 This young man, Justin Peterson of Chewelah, was presented with a flag for raising about $5,000 for the Honor Flight trip that allowed WWII veterans to travel to Washington, D.C. Cool beans!

I'm going to fact check what Cathy McMorris Rodgers had to say and I'll write more about that later. However, near the end of the meeting time a gentleman asked three questions, the last about what she thought about the mosque being built in New York City. I can only categorize her response as shameful.

"I believe it's a poor choice of location. As I view it, I think like many in America, it almost feels like a victory dance on the place where we were attacked on 9/11. And it's offensive to me."

A victory dance by whom? There's nothing like demonizing a great number of people to affect voter's emotions.
Posted by Hank Greer at 8:39 PM

Maybe if she advertised her events more than a few hours in advance, more people would show up. Not sure if that's by accident or design but likely the latter. And yes, shameful regarding her last comment. Thanks for the info.

Why go to public meetings with elective officials, when the decisions that matter are made regardless of public input, or even the public interest--and those with the power to decide often don't answer to the public.

We have a post-democratic political system.

Get some million$ if you want a political say. Otherwise, its more productive to go for a bike ride.