Occupy Spokane got a little interrupted today. It was busier this morning with a few extra protesters and a team from KXLY on hand. The police stopped by last night and gave the group another warning about violating the Transient Shelter ordinance and said they needed to have the tents and shelters removed by 6:00 am today. The amenities were improved over yesterday. Tables were set up on the island. they were making coffee on a camp stove. A box of donuts donated from a 7-11 and dropped off by a taxi driver sat at the ready.

Dave Bilsland said he expected the police to show up at any moment to have the tents struck down. His plan was to roll everything up and put it on the island and then maybe camp out on the grass surrounding the statue of Abe Lincoln. 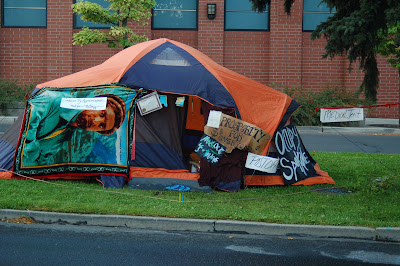 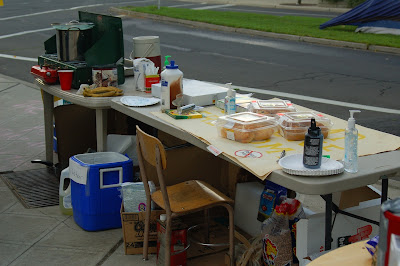 Around 9:00 am, the police showed up. Everyone struck down their respective tents when asked. Bill did once he was cited, but then he wanted to be cited. The tables and anything affixed to a structure or signpost also had to be removed. 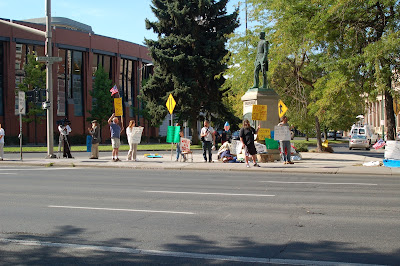 The protest continues but anyone wanting to camp out will probably have to park nearby and sleep in their car.
Posted by Hank Greer at 7:20 PM