An interesting web site has sprung up, care of a man in Aberdeen, Washington. The idea is to encourage people to not sign the forthcoming petitions to put same-sex marriage to a popular vote. But if it gets enough signatures, and it probably will, then he'll change the site to approve the referendum. 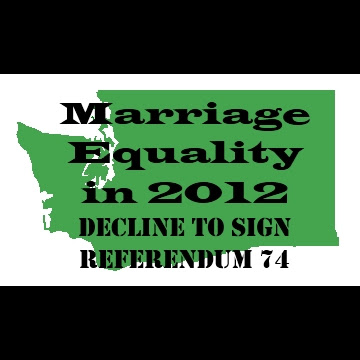 Last Sunday I sat through the most bizarre homily I've ever heard in which a very young priest tried to explain how using contraception was not only sinful but it interfered with the Blessed Trinity's involvement in procreation. Now that same-sex marriage as been made lawful, I'm sure we'll be receiving more moral guidance.

Would that the bishops would put so much energy into opposing war, capital punishment, and other issues that Jesus taught....