“We were put on this Earth as creatures of God to have dominion over the Earth, to use it wisely and steward it wisely, but for our benefit not for the Earth’s benefit."

"I for one never bought the hoax. I for one understand just from science that there are one hundred factors that influence the climate. To suggest that one minor factor of which man’s contribution is a minor factor in the minor factor is the determining ingredient in the sauce that affects the entire global warming and cooling is just absurd on its face. And yet we have politicians running to the ramparts — unfortunately politicians who happen to be running for the Republican nomination for president — who bought into man-made global warming and bought into cap and trade.” 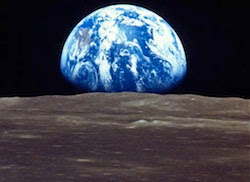 When we look at a photographs of Earth taken by the Apollo astronauts, we can't help but notice how small and insignificant our home planet is compared to the universe. When our astronauts returned—and even more so for the distressed Apollo 13 mission—they knew that when they landed safely they had arrived home. One day in the distant future someone may studiously observe the footprints and American flags left by astronauts who, although sent there by America, recognized they represented all of mankind. These students may be reminded of Ozymandias—if a record of it still exists—and wonder who these people were who achieved such fleeting greatness.

In Rick Santorum's home he is free to use wasteful incandescent light bulbs even though science, and his electric bill, tell him he would consume less electricity if he used more efficient bulbs. He can buy new bulbs just as quickly as they burn out. He has dominion over his home and using energy wastefully would be for his benefit, not for that of his home. Rick Santorum has the liberty to let food in his refrigerator go uneaten and spoil even though science easily predicts such an outcome. If it ruins the fridge, he is free to buy a new one for he has dominion over his refrigerator and it is there for his benefit. He is not compelled to benefit the fridge by keeping it clean. In Rick Santorum's house he may very well chop up his furniture and burn it in the fireplace to warm himself. The furniture is there for his benefit and he is free to run to Ikea or contract with a furniture maker to replace the table he warmed himself with. He has no need to dust or polish or otherwise benefit the furniture. The useful existence of knives in Rick Santorum's kitchen could be quickly cut short. They are there to benefit him and doing his knife a service by keeping it sharp is outside his purview. Fortunately, he can always buy another one to replace the dull blade he uses to rend meat in a manner that leaves it as incomprehensible as his thoughts on science.

When Adam was presented his home in the Garden of Eden, he was placed there to work it and take care of it but he did not have free reign to do as he pleased. From man's fall from grace we learn that selfishness is not an ordained and blessed trait.

I have no reason to believe the condition of Rick Santorum's home is as I have described. If it was, he would quickly be labeled a buffoon and valuable time would no longer be wasted upon him and his nonsensicalness. Mankind has but one home to pass on to its children. If we are to have dominion over our home as described by Rick Santorum then concern for our children is not significant enough to enter the conversation. We should not be bothered to think of the poisons in the air or water, fearsome droughts, dwindling farmlands, extreme storms, the melting ice caps or any other subjects our scientists study and report on.

If it is truly our place to have dominion over the Earth, our only home in this expansive universe, then may it be grand and glorious, short lived though it may be.
Posted by Hank Greer at 7:37 PM