The Yakima Herald-Republic has a poll (Do you support legislation to legalize same-sex marriage in Washington?) to go along with an article about those opposed to same-sex marriage. It's not surprising that the poll results don't look good. 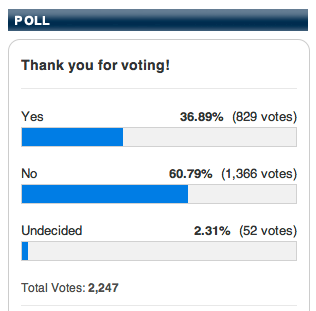 Bob West, the leader of the local tea party group Grassroots of Yakima Valley, and Central Washington Tea Party organizer Kirk Groenig also said they would get opponents organized and signed onto a petition against gay marriage.

"We have a few people (in the Legislature) making decisions for the rest of Washington," Groenig said. "That's not right."

Yeah. Just who do those elected officials think they are passing laws for the rest of us? It's insane!
Posted by Hank Greer at 11:44 AM

So, the tea party is in favor of smaller government, except when it comes to regulating who you can love?
- Ventura

I'm confused why Ron Pauls stance that marriage is not a government institution doesn't get more traction. I find myself in agrement with the Tea Party on some fiscal issues but they really contridict themselves on social issues.

With liberty and justice for whom?

Someone needs to explain to Mr. West that when a majority of both state houses vote for something it isn't a few people in the state ledge making rules for the rest us.