I took the Elephant out for a long ride this morning before the scorching heat arrived. I didn't have a set route but looked at the map to get a general idea and then made it up as I went along. I ended up including pavement, gravel roads, and trails. The idea was to get at least three hours of saddle time over a mixed route in preparation for the Midnight Century and explore parts of Spokane unfamiliar to me. I wasn't concerned with how much distance I covered, just being in the saddle for a while. Here's the route:

View Wandering and Exploring in a larger map
My southbound trip to Minnehaha Park was easy enough. From there I followed dirt roads and trails, essentially following the path of least resistance because the cross bike is the wrong bike for parts of the trails. I walked a bit here and there where it was too steep or gnarly. I had no idea where I was going and found myself coming out onto Wellesley. 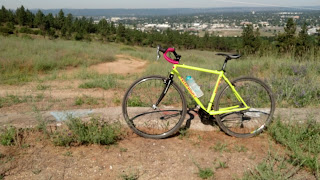 Sorry for the crappy smartphone pictures. Since I don't have a rack on the bike yet I carried everything in a small backpack and I didn't want to have that and my DSLR hanging off me. 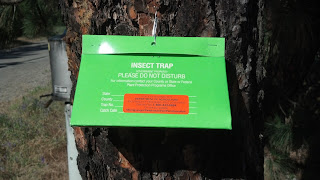 Ha! Nice try but the government will never catch me. 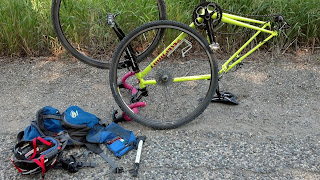 It wouldn't be an adventure without a flat. The shade was so nice at this spot I decided to patch the tube. Not so for the second flat. I swapped the tube out for that one. 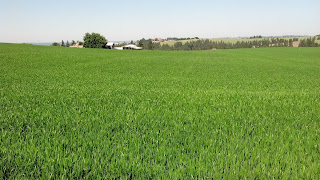 Mount Saint Michael off in the distance, home to some renegade Latin-speaking Catholics.

*  *  *  *  *
I followed Valley Springs to Bigelow Gulch. A short bit on Bigelow Gulch and I headed north on Orchard Prairie which turned out to be a deceptively long climb. But I live for that, right? A little more wandering around and I turned south onto Palmer Road. Too lazy to check the map on my smartphone to see where Palmer went, I followed it to Bigelow Gulch, turned around, and returned to Orchard. I did a loop around Mount Saint Michael's, got back to Orchard and followed Gerlach to the Children of the Sun Trail. Up over Fairview, through the Peone, through Mead, back on the Children of the Sun, and home again.

Don't worry about the Midnight Century. I scoped out the ENTIRE first 20 miles and it is ALL smoothly paved with not a climb worth mentioning. I lounged on the conviently-placed park benches and enjoyed a Krispy Kreme support station every 10 miles or so. There's even a river conviently placed along the route for sipping.

No sir, that Midnight Century shouldn't keep you up at night.

Thanks for the route report.