One thousand chairs and horrible acoustics awaited the four to five hundred people who showed up at the Spokane Country Fair Expo to comment or hear comments on the scope of the environmental impact statement on the Gateway Pacific Terminal. Of those wishing to expand the EIS to include Eastern Washington, North Idaho, and Montana (against coal), many wore red shirts sporting the PowerPastCoal.org name, wore "No Coal Exports" stickers, and/or held up "No Coal Exports" signs. Those speaking for limiting the EIS to Whatcom County (pro coal and/or pro jobs) ironically wore green shirts with "Let's Get To Work" on the back. Red shirts dramatically outnumbered green shirts. "No Coal Exports" signs overwhelmed the mix of pro signs. (I'll refer to each "side" as red shirts and green shirts.) I figure red shirts outnumbered green shirts by 6 or 7 to 1.

Only the first 75 people would get to make verbal comments. There was some consternation earlier in the day when about 35 green shirts, some of them being paid to stand in line, took places in line today. The first five in line were red shirts who showed up around 7:45 am. 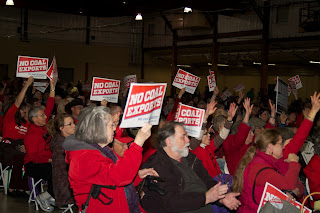 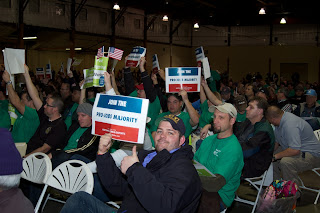 The audience was informed of the rules: Commenters have two minutes, no cheering or clapping, hold up your hands or wave a sign to show approval, and a thumbs down if you disapprove. Helpful comments included providing alternatives, affected resources, adverse impacts, and ways to minimize effects. Anything else would not be considered substantive. With that, Ben Stuckart, City Council president, was the first speaker, followed by four more red shirts from Spokane and Montana. The next 35-40 speakers were green shirts.

Green shirt commenters spoke about the need for jobs, boosting the economy, and there was a remark or two about the misguided red shirts. My impression was that most of the comments were not substantive. While the green shirts were speaking, I talked to a man wearing a green shirt who had #36. He said he was from Spokane and he was speaking because he was tired of the environmentalists running everything. He realizes we need to take care of the environment, but we need jobs, too. And even though the jobs were in Whatcom County and not in Spokane, the state and the economy as a whole would benefit. I asked him about the guidance concerning substantive comments and he misunderstood what I was talking about. He pointed to a blue sheet of paper on his chair, "It's right there. It's just bullet points." Bullet points? I calmly asked if I could see it. He rolled it up and gave me a suspicious look. "No."

I ran into Bart Mihailovich, Spokane Riverkeeper. He was thrilled that the hearing was taking place in Spokane and that so many people had attended. He shared my concern about the comments being substantive. Bart arrived in time to be included in the 75, but had given his number to a little girl who wanted to speak. Nice. 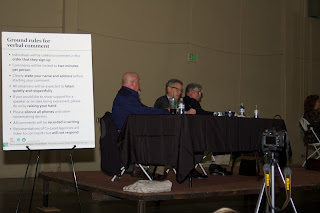 Pens are in hand.

I later ran into City Councilman Jon Snyder who had a different take on the comments. "Every time you see them (the panel) pick up a pen, you're saying something they're concerned about." Jon had some very nice rhetoric in his two-minute speech. He was concise and on point. He questioned the impact of increased gate times on emergency responders and the transportation plan. Pens were in the panel members' hands.

As the evening progressed, the red shirt comments did address more impacts on the community, water, air, and more of the various communities being represented. I also noticed that after the bulk of the green shorts spoke, their numbers noticeably dwindled.

By the way, when speaker #36 was called up, the gentleman I spoke with was nowhere to be seen and had been replaced by former state senator Jeff Baxter of Spokane Valley. Well, it's not like Ben Stuckart arrived at 7:30 am and waited all day so he could be the first speaker.

Whenever there was applause or an outburst, the announcer would chastise everyone with a reminder that they were not to do so. After the fourth-grade girl from Roosevelt Elementary spoke, the crowd cheered.

Darn right you will.

The hearing was moving so smoothly that they announced that more people could sign up to speak and they would get as many in as possible until 7:00 pm. Several ran to the sign up desk. I left around 6:20 so I could get home at a decent time since I was letting Spokane Transit do the driving.

Thanks for the link. Coal exports are a bad deal.

In China, we have a folk saying:

Also, a chán koan that states:

The nails that stick up get mowed down by automatic weapon fire.

May I also submit a guiding principle from our beloved Little Red Book:

Give us the fucking coal already, you dirty American peasants!

It's wonderful that we can have a reasoned discussion of the underlying principles of international trade.

One environmentalist opposed to coal said she was one of the first in line and was holding a place for tribal officials from Wyoming to testify.
She said the temporary workers all showed up at the same time about 8 a.m. wearing green T-shirts supporting coal shipments.
Only one of the temporary workers acknowledged that he was hired to hold a place in line. The others declined comment.
The temporary workers were hired by the Northwest Alliance for Jobs and Exports, an industry- and union-backed group. Spokesman

These sorts of crude tactics to undermine democratic process may look familiar to anyone who watched the street theater of pro-Tibet demonstrations on US campuses in the 90s. At that time the Chinese government would pressure Chinese students studying here to encircle Tibetans marching, as well as identify and threaten Tibetan participants.

Is it a coincidence that similar tactics are being used on the coal issue?

Of couse DHS and local police departments provided many occupy 'protesters.' But the US pattern is usually more directed at agent provacateurs and coopting the decision making process of protest movements.

Mass rental of protesters seems like something relatively new on the US scene, and it has appeared both from internationalized corporate elites (like the Koch brothers) and from the supposed left (SEIU leaders taking money from Big Pharma in exchange for providing member marchers for Obamacare).

It's not just our elections that have a Chinese-corporate sense of determined outcome; our protests are also becoming as surreal as Chinese opera from the Mao era.

What I find interesting is the almost total silence from the US left media on the Washington coal protests. When Spokane does appear in Salon or Mother Jones etc, it's for our serial killers or our racist fringe bombers. Salon is posting a daring expose of Bilbo Baggins at the moment.

Of course, many of the writers at these publications are stuck in a "China can do no wrong" sort of reverse xenophobia, and have a distaste bordering on bigotry of the US outside of major urban centers.

But, in order to ignore Spokane this time, they have to also ignore Seattle and the People's Republic of Bellingham. Interesting to see if they can pull it off. They've already minimized coverage of Keystone and fracking to "bunch of rednecks", but that pipeline runs exclusively through the Great Plains.

You can get a decent latte in Seattle, right? Does the elite US left cross Seattle (and Portlandia!) off the map now too?