Congresswoman Cathy McMorris Rodgers wants to hear from her constituents again--and possibly anyone else in the country. She lists her top ten issues for 2013 and asks for your opinion. 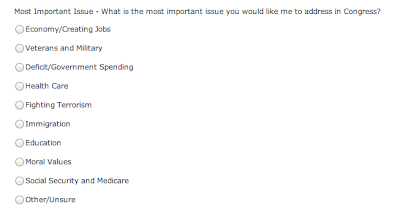 Hmmm, for Congress to help create jobs should they spend billions or cut taxes and spend less? We are given diametrically opposed options with Other/Unsure covering the huge space between them. Now according to the 2012  Republican Platform (PDF):

Taxes, by their very nature, reduce a citizen’s freedom. Their proper role in a free society should be to fund services that are essential and authorized by the Constitution, such as national security, and the care of those who cannot care for themselves.

And we don't want to reduce our freedom, do we? And Republicans have a sterling record of using taxes for the care of those who cannot care for themselves.

Yes, we know Cathy McMorris Rodgers voted against the Affordable Care Act. Many, many, many times. Yes, the web site was a piece of crap. This is the first time I've seen her mention anything along the lines of keeping the law. As for starting from scratch, the Affordable Health Care law was passed in March of 2010. Republicans have been busy with the repeal part of "repeal and replace", but not so much with the replace part. A bill they offered up last September benefited the wealthy and the insurance companies.

Now this is the first time I've heard our congresswoman mention anything about the NSA. But she doesn't mention the rampant unchecked surveillance of Americans. It's "around the world". Also, notice that security agencies are "slowed down" by new laws. Not very encouraging from a congresswoman who claims to be very concerned with our freedoms.

I love how there's been so much scientific research, which she doesn't get into at all, and then asks what you think. If the science agrees that climate change is real and that we've had a huge part in creating it, why is she asking what we think? Here's a question. If temperatures are rising faster than predicted will we become extinct sooner than predicted too?

Here's another either/or choice. It's not that all dams should be torn down. But as the contribution from wind and solar power increases, it's possible we can do away with some dams and restore the environment.

Now the provided answers to this question make no sense at all. (Same as last year.) The question asks if there should be more restrictions. (As to what restrictions, that is left to the reader's imagination.) The answers don't relate to the question at all. You're either pro-choice (with or without taxpayer funding) or pro-life. I recently had a conversation with someone who is a devout Catholic and yet differs with the church's explicit pro-life stance and expressed that abortions should be legal and rare. But at the same time this person thought something should be done about Planned Parenthood providing abortions. I recognize that abortion is an incredibly difficult issue to deal with. And this is an example of someone who didn't treat it as a binary issue, which is great, but is still influenced by the overwhelming perception that abortion is a binary issue. For election purposes, abortion as a for-against issue works great. But applied in the real world it fails women everywhere--unless they're wealthy.

Hey, our congresswoman caught wind of a change in her home state. This is the first I've heard her bring up the subject of marijuana. Federal law should legalize marijuana for everyone in the country? For reals? She thinks that's a viable option? Let's start with removing marijuana from the Schedule I list. There's no science supporting it's placement there. How about funding research so we can scientifically determine if or when someone is impaired? How about funding medical research? How about taking a larger view and addressing the war on drugs? Check out Portugal's reduction in drug use and abuse since they decriminalized possession and use back in 2001.

Another set of idiotic answers although they do differ a little from the last two years. The first answer has "that should not be restricted" added to it. As for the second answer, the last two years it was "There should be more controls on gun ownership." But you only have two views to choose from.

In the last two surveys she referred to them as illegal immigrants. This year they're undocumented persons. What? They're not criminals? Is this a kinder, gentler congresswoman perhaps? One possible answer she leaves out is providing more low-skill worker visas, of which there are too few issued, so workers could come to the U.S. legally, work during the season, and then return home.

Take the survey if you think it will matter, but since the main top ten issue Cathy McMorris Rodgers dealt with last year was the Affordable Care Act, don't expect it to. 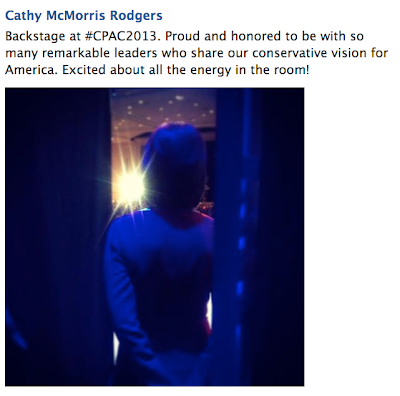