A Minnesota couple, Pete and Alisha Arnold, created a web site called Birth or Not on which they have an on-line poll asking, "Should we give birth or have an abortion?"

The couple is currently 17 weeks pregnant and allegedly are unsure if they want to be parents. So they're asking the world if they should give birth or have an abortion. They've been posting pictures of the ultrasound scans of the fetus.

And people are pissed. You can read more about it at the Daily Mail.

Alisha Arnold claims to be 17 weeks pregnant. That would start her pregnancy around the second week of July. I took a look at the domain name registration and found it was created on May 17, 2010. 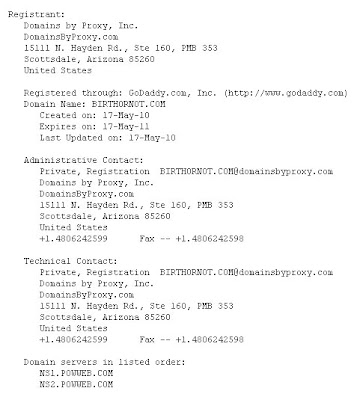 Why would you create a domain name for this purpose two months before getting pregnant if you weren't sure you were ready to be parents?

Here are some guesses I have.

* Purposely get pregnant and use the web site to decide to have or abort the child, trivialize the decision to have an abortion, and get lots of attention.

* Fake the pregnancy, use the site to trivialize the decision to have an abortion in an attempt to rally the anti-abortion movement, and get people so upset they push for their (Minnesota) legislators to make abortion illegal in their state.

We will find out on December 9 when they must make their decision. I'm betting it's a hoax.
Posted by Hank Greer at 8:43 AM

It's creepy what some people dream up.