Touch My Junk, I'll Have You Arrested

An interesting story about a man who opted out of the scanner at the San Diego airport and objected to having his genitals touched during the enhanced pat down search. After not getting patted down he was allowed to return to the ticket counter and get a refund on his ticket. I don't think the TSA ever expected anyone to do something like this.

He had his cell phone recording video and audio during much of the exchange. I'm curious if criminal charges can be brought against him for that since photography is not allowed at the security checkpoints.

Good for him for standing up to the TSA security theater. However I don't think many people are prepared to follow his lead since everybody going through the security checkpoint is catching a plane and you don't do that on a whim.

I forgot to mention that Nov 24, the busiest day at all our airports, is National Opt Out Day. The intent is to cause delays by opting out of going through the scanners and forcing TSA to dedicate personnel to physically search passengers. Also, there's the option of not flying which affects the airlines' bottom line if enough people don't fly. Presumably, if everyone is running late enough or people don't fly, then the airlines will apply pressure to TSA.

I'm no expert on queueing theory, but I imagine that if enough people opt out and go through the enhanced pat down instead, then it's possible it could cause delays if TSA doesn't have personnel dedicated to doing pat downs and has to pull them from the security checkpoint process. There's already a long delay at the security checkpoints in major airports so I suppose it's possible that enough people opting out of the scanners could cause additional delay for someone other than themselves. And yet the comments on the TSA blog concerning the enhanced pat down procedures would indicate a lot of people are upset.

I'd like to see what TSA would do with a woman traveling with several children opting out of the scanner. 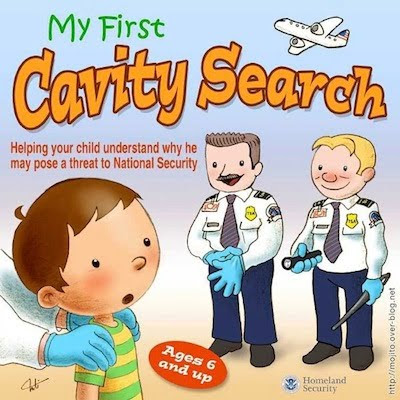 Found on boingboing
Posted by Hank Greer at 11:48 PM

There is an imaging opt-out civil disobedience action brewing just before Thanksgiving.

This man's civil disobedience may be better though, since it can hit the airlines bottom line if well-planned.

The audio photography issue also needs to be challenged. TSA posts its own video of the checkpoint when it wants to (and without consent of those filmed)--they have video up on youtube even. I doubt the restriction can stand scrutiny.

Hey, if TSA has "nothing to hide, they have nothing to fear."

I'd like to see civil libertarians make thoughtful, targeted civil disobedience attempts on the opt-out day. The better model would be the bus and lunch counter integration efforts in the sixties. Rosa Parks was not by chance. Not every lunch counter had to be protested at once--a single publicized protest, backed by lawyers and covered by media, was most effective.

It would be best for a group of lawyers/celebs to make an effort together to set up good test cases. Filming the effort could be its own protest.

Here's a pretty interesting article connecting some of the dots about the lobbyists behind the new body scanners. http://ax0.us/scannerlobby

A targeted opt out would probably make an impact.

Thanks for the link.