Stacking The Deck Against Cycling

In last week's Inlander, George Nethercutt touts the benefits of bicycle riding as a means for improving personal health and holds up the Netherlands as an example to follow. Well, to a point, but more on that later. He does offer some very supportive information.

I completed a seven-day cycling trip last month of the Netherlands and parts of Germany. A noticeable aspect of the trip was the startling number of bicycle travelers Holland boasts. Most cities throughout the Netherlands contain some auto parking garages but many bicycle parking garages for commuters, workers and students — huge facilities that house tens of thousands of bicycles. Roadways are filled with cyclists of all ages. Particularly notable were elderly cyclists whizzing along the trail ways of Holland at all hours of the day. Dedicated roadways for bicycling abound. Bicycles are the most common form of transportation for the Dutch, and their statistics show it — low heart-disease rates, low auto-death rates and low physician-per- 1000-population rates. It’s hard to spot an obese Dutchman in a shopping mall or walking on any busy street.


...
Riding bicycles is good for the human condition, and many Americans would benefit from cycling more and eating less. Disconnecting ourselves from high dependence on the automobile can be therapeutic and healthy — and can impact the obesity problem in America as well as help shape the content of the contentious debate about government health care spending.
...
With high costs for gasoline and liability insurance for automobiles, it makes economic sense to reduce auto use in favor of the health and financial benefits of bike-riding whenever possible.
...


In this age of increasing dependency on government, Americans have the opportunity to be more independent regarding their own health care needs.

Wait, what? Who's increased dependency on government? As the New York Times brought up last year:

Cars enjoy huge direct subsidies in the form of road construction and public parking spaces, as well as indirect subsidies to the oil industry that provides their fuel. These subsidies far exceed the tax revenue generated by car use.

They also pointed out that as of 2010, federal spending on bike and pedestrian infrastructure amounted to less than $4 per person.

Mr Nethercutt led his column off with this statement:

With its enviable waistlines (and lifespans) Holland's two-wheel culture is something America should emulate.

In 2010, the Netherlands spent $30 per person for their bike and pedestrian infrastructure. As Mr Nethercutt saw for himself, the difference is dramatic and the contrast with America is striking. The reason for the great difference is not that the Dutch decided to ride bikes to keep from becoming obese. It's because about forty years ago the Dutch decided to make their country bike friendly. And they reap the benefits in many ways, public health being one of them. 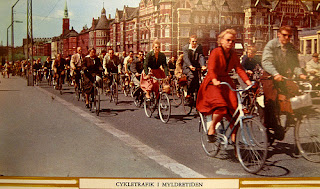 And us? Not only are we far behind in funding, we may head off in the wrong direction. The Republican-controlled House is intent on removing funding for bike and pedestrian transportation, eliminating Safe Routes to School, and using the bill to approve the Keystone tar sands pipeline and limit regulation of coal ash.

But riding a bike is still good for you even if you ride just to spite Congress.