How Can We Protect What We Do Not Have

Here's an interesting coincidence with the latest news about online privacy and how much information our government collects on its citizens. As part of my gig with Out There Monthly, I ask people I find walking, running, riding, etc., if they'd like to be featured on the OTM Facebook page. Most people are cool with it, but a few people decline, which is fine. I completely understand. If a complete stranger with a camera hanging off his back rode up next to me on a bike and said he wanted to put me on Facebook, I would be pretty hesitant and slightly suspicious. Heck, I even had one person ask to see my ID. 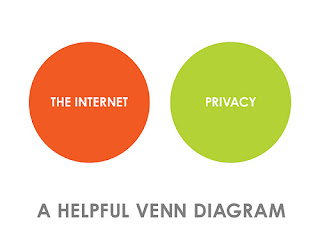 I recently had one person decline and unnecessarily--and unprompted because I don't ask why--explain it was because of their job. During the explanation they gave me a generic name for their job.

Later on, I wondered what I could find out from just that bit of information. In barely ten minutes of poking around with a search engine, I found enough information with which I could probably go back and surprise that person with how much I learned.

Imagine how compete that picture would be if I knew what phone numbers that person called or called them and how long they talked. And if I captured all their emails, credit card transactions, and library checkouts. And if I knew the IP address(es) they use and what IP addresses they connect to. And if I knew the location of their cell phone. I don't have that kind of access, but in this person's case, I didn't need it.

We have very little privacy unless we live completely off the grid. So how do we protect it?

Through law. It's not just paper that gave us privacy.

In 1975, no one had privacy. Anyone could go through anyone's private papers, including the government. Federal agents regularly walked into my house to peruse my file cabinets.

Except, that's not true. Not because of paper, but because of law, including the Fourth Amendment. When exceptions occurred, such as Ellsberg, we saw them as illegal.

That's the difference. It's not just the structure of the web, though that could be changed. It's the hazard-free legal environment for the elites. Why is elite surveillance on Occupy OK, but not on Goldman Sachs or Tim Geithner. Why is suppressing peaceful protest ok, but no penalties on feds/police who violated protestor rights with surveillance and actual violence? Why does Jon Snyder think its OK to film and record citizens around the clock, but for the "right people" (ie himself) to meet secretly with corporations?

The worst thing Obama did wasn't setting up vast illegal surveillance; the worst thing was what he didn't do in prosecuting high level crooks. In fact, surveillance often follows social injustice--the newly government re-empowered Wall Street cartel could demand surveillance and Obama complied. That's a dynamic that predates the web, in fact it has a long history right here in the Northwest.

This is not a tech question, or not just a tech question. The tech has not just shaped the structure of political power--the triumph of a hazard free power elite has shaped the tech, and who the cameras are aimed at. These are broad historical, social questions, but we are looking only at a narrow slice of them. We are enthralled by the digital world created by a very small group of entrepreneurs with similarly abberant personality types. Why are we allowing soulless awkward nutjobs like Zuckerberg or Alexander to decide our liberties? Who watches THEM? Are these men you'd havd in your personal life under any other conceivable circumstance?

There are plenty of other legal-political-technical models that we can consider. Certainly the Constitution suggests other models--which is why the sadly corrupt Obama no longer mentions it. That's a real challenge for the elites, the model they are building has lacks a sustainable core compared to a model based on law. Already we can see competing power centers forming, often built on single intolerant personalties (Clapper, Alexander). For now, the elites can agree to spy on us, but that's about where their agreement ends.

I have trouble believing Americans will settle for gray conformity and elite subservience forever, when free democracy is just more vibrant. The elites are obviously getting suspicious and desparate. Eventually we will have a real, legitimate election. Let's just hope the elites hand power back to the people in a peaceful fashion when we no longer believe in the false dichotomy of privacy and technology. We will remake and re-regulate tech and turn it around to face them. We will bring back moral hazard under the law. That process has already begun.

I agree, though. I'd just add that it is very unlikely that an authoritarian technocracy can solve an issue like global warming. In fact, the current regime has just doubled down on status quo solutions, not real innovations, and particularly not innovations that use tech in democratic ways.

Greenwald says he has more in store, and would like to talk with the FBI to explain the First Amendment to them. Dude has balls.

The DemocratRepublican Congressional elite (no difference anymore) are screeching for his prosecution. Reenergized Americans are looking at class action options.

With no sense of irony, The Clapper complains of criminal acts.

Obama falls back into marginalized silence.

I was thinking about this in church today. I'm pretty sure that Reinhold Niebuhr's advice to Obama would have been that, as President, he has a moral obligation to prosecute fraud and torture BECAUSE he could not expect institutions to act as moral individuals.

Throw away the Fourth Amendment for a Like button?

Not such a great deal in the long run.

Check this out, the NSA was developing tech to subvert the 4th Amendment by the late 90s, and making an elitist secret argument to "senior leaders" to justify it.

“Make no mistake, NSA can and will perform its missions consistent with the Fourth Amendment and all applicable laws. But senior leadership must understand that today’s and tomorrow’s mission will demand a powerful, permanent presence on a global telecommunications network that will host the ‘protected’ communications of Americans as well as the targeted communications of adversaries.”

So, while playing lip service to the Fourth to "senior leaders" the NSA was actually developing tech that blatantly violated the content of the Fourth.

In other words, the structure of tech is a choice, an ideological choice. In this case, there was zero conversation on a choice that the elites now claim amended the Constitution. But you can't amend the Constitution except in Constitutionally prescribed manners. Here, the NSA and supreme leaders dictated a new meaning for the Fourth. They can't.

It would be like if I using a Sawzall to enter your house and steal your stuff, then claiming the existence of the Sawzall meant that home burgalry laws didn't apply to my actions.

No, there are designated ways to change laws, including the Constitution, and tech is not one of them, even if tech makes violating the law more easy. It's very easy to punch a gas pedal to 120, but no one claims that tech changes the law. So why does the NSA violation of the Fourth Amendment get a free pass?

Holy shit, introducing the bravest best man in the world:

I disagree with the Venn Diagram, the title of Hank's piece, and most of the content.

There is no purely technical reason a packet of email cannot have a similar level of privacy as a snail mail letter. Remember, the privacy oc the letter is protected almost entirely by law along its travel. Email, otoh, has laws that do away with privacy protection. If the laws were the same, the privacy would be more the same.

There are DIFFERENT technical issues for electronic privacy, but lets not pretend paper envelopes provided some uncrackable code! We don't pretend that the privacy limitations of envelopes entirely undermined the concept of privacy and the Fourth Amendment. Actually, privacy and the Fourth created an environment so only a flimsy envelope was needed. Our logic for email is completely upside down.

None of these issues are technical, they are legal.

I'm not saying there are not technical privacy issues, but note that many were CAUSED by the NSA and other government actors, by corporations and by bad law and court decisions. Many solutions are BLOCKED by these entities.

Snowden is quite spot on regarding the possibility of creating a web for authoratarian surveillance versus a network for democratic sharing that allows privacy.

We need to get the military-run NSA out of the post office business. At best, they treat our communications like soldier letters in wartime.