The Irony, It Rains Upon Texas

And several hours later, after a filibuster attempt by Senator Wendy Davis, the Republican-led Texas Senate held a last minute vote on what would be the most restrictive anti-abortion legislation in the nation. The vote deadline was midnight.

The Senate's web site reflected the voting was completed on June 26. 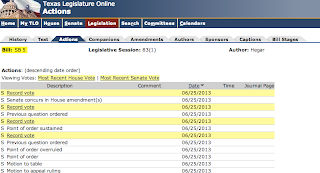 Nine seconds later there was an update showing the voting was completed on June 25.