About a year ago my sister Jan asked me and Kathy if we'd like to backpack through the Zion Narrows Canyon. She and her husband Chip love the outdoors and they've spent a lot of time enjoying the wilderness. While Jan is certainly no slouch, Chip has done some serious hiking.

Last year they had a permit but the park was closed due to the government shutdown so they missed out. They really wanted to go and asked us to join them. Kathy was all for it so we waited as Jan applied for an October permit so we'd catch the fall colors. Permits are awarded via a lottery process.

The shuttle dropped us off with about 16 other people. Each group had an assigned camp site for the night. We were at camp site #1, which is at the confluence of Deep Creek and the North Fork Virgin River. The weather forecast was great so we didn't need to worry about flash floods. Flash floods in a canyon are not to be taken lightly. 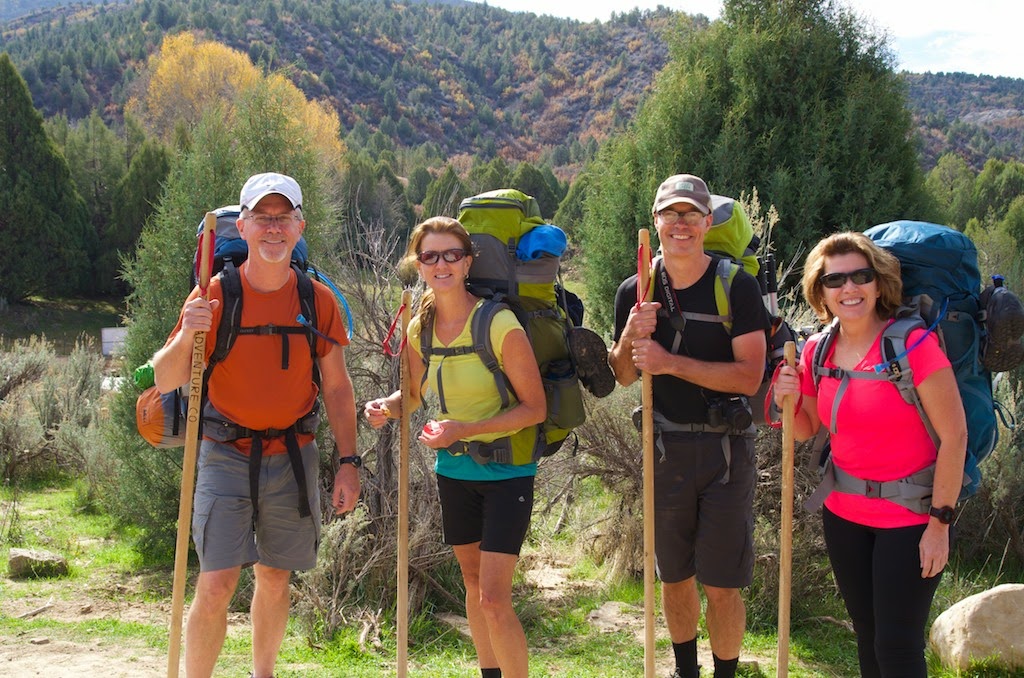 Me, Jan, Chip, and Kathy all loaded up and ready to roll.

For the first couple of miles we hiked on a dirt road, which eventually became a trail, which led us into the canyon. Then we donned our rented neoprene socks and canyon boots since we would be walking in the river for most of the trip. Kathy and Jan wore their dry pants the first day to keep from getting chilled by the water. The water was shallow for most of the first day with a couple of spots that were almost knee high. 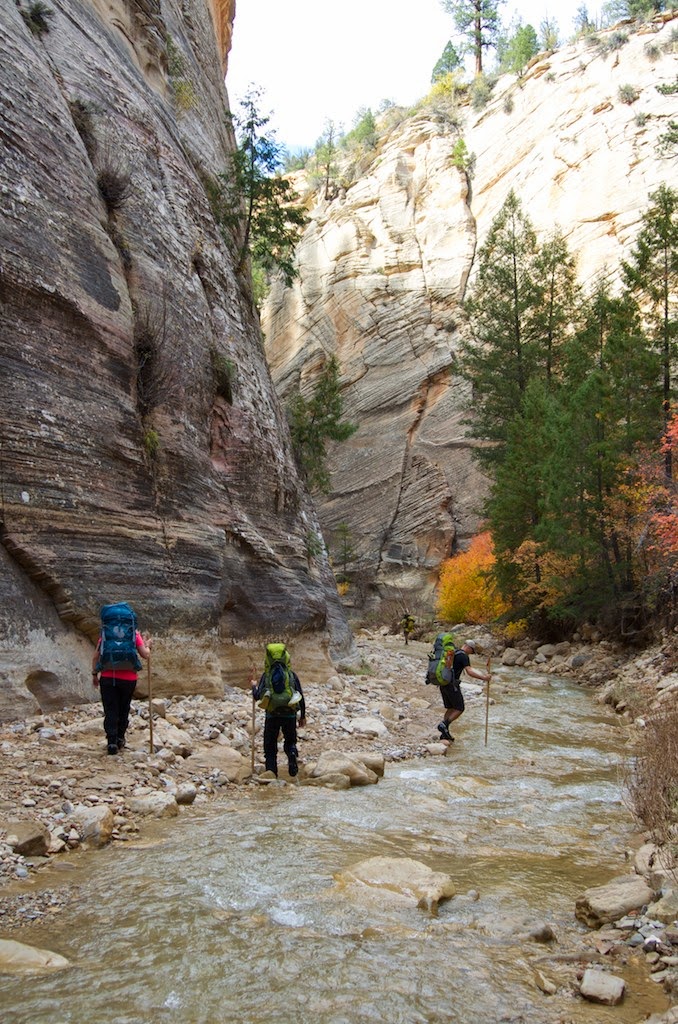 The sand bars were easier to walk on. I can't begin to count how many times we criss-crossed the water. 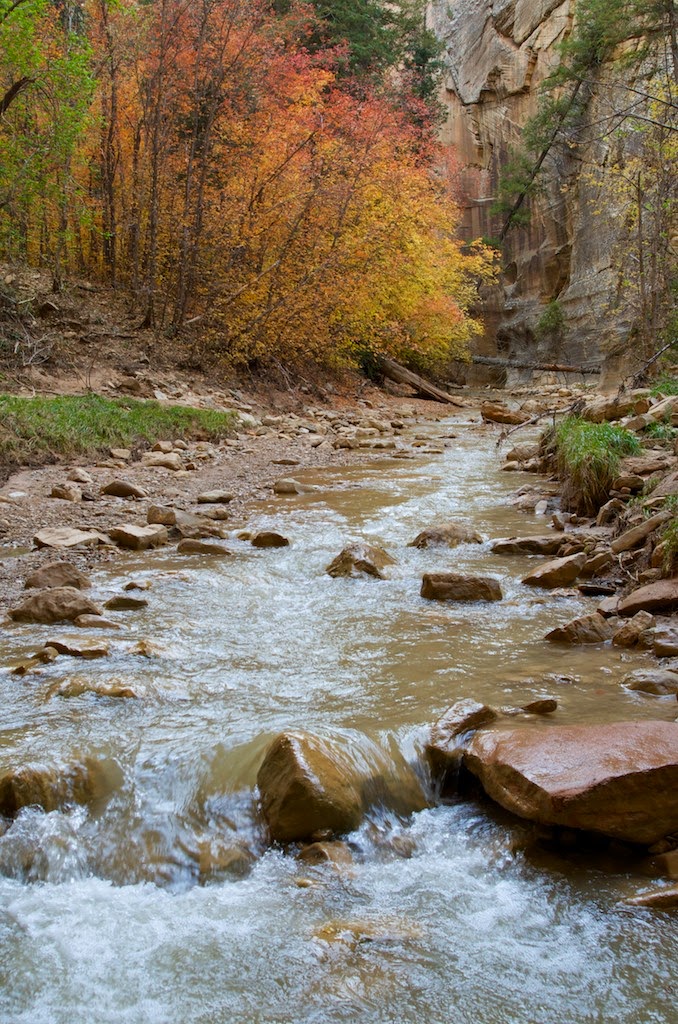 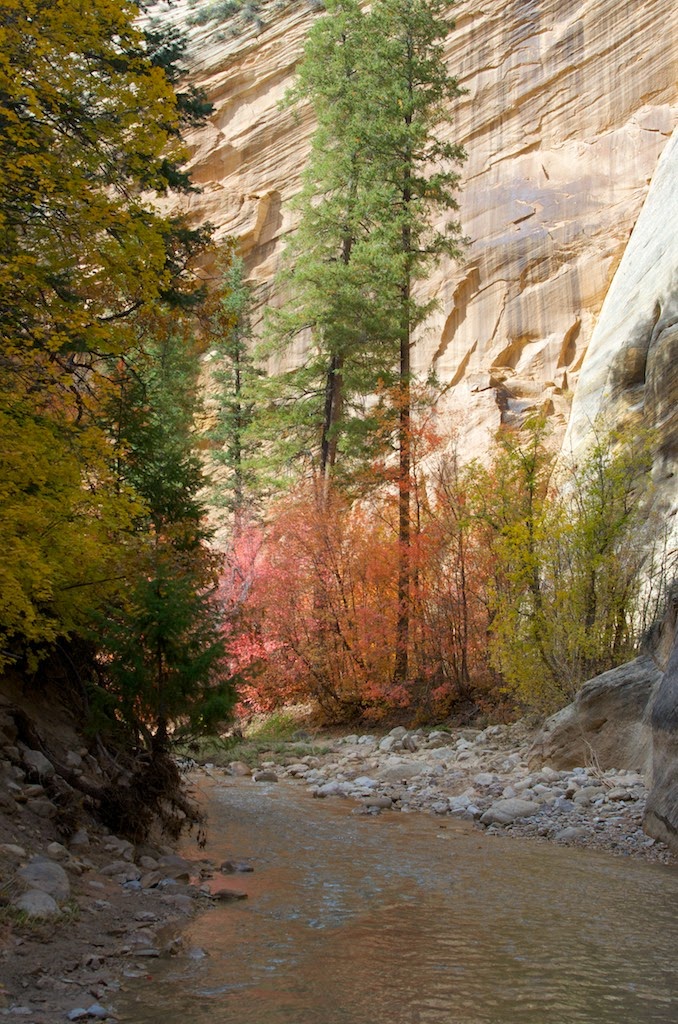 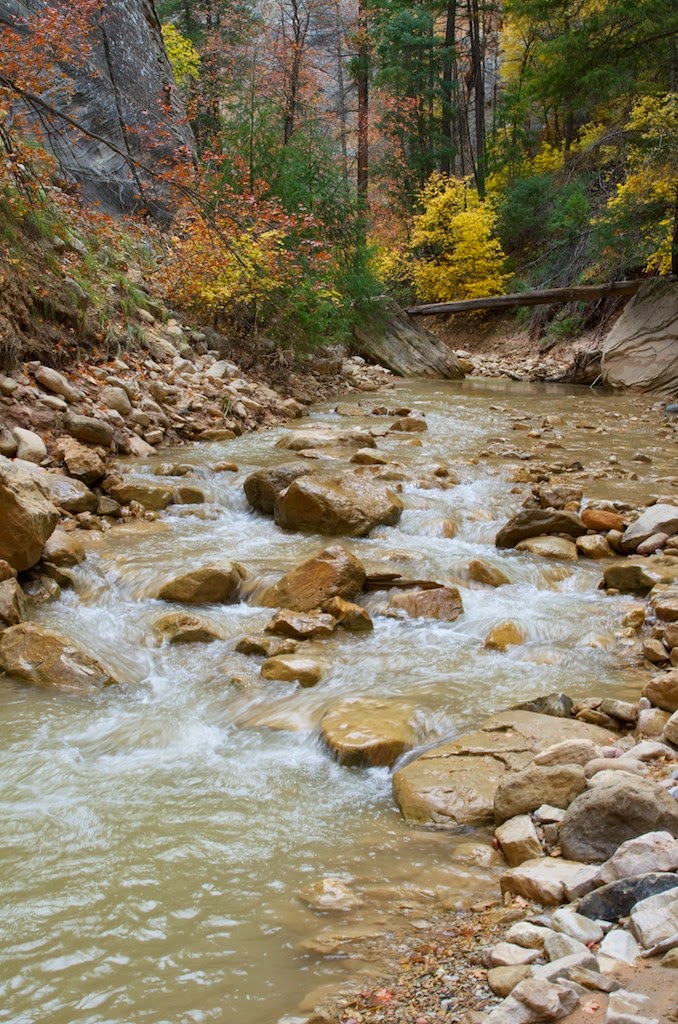 The fall colors were impressive. 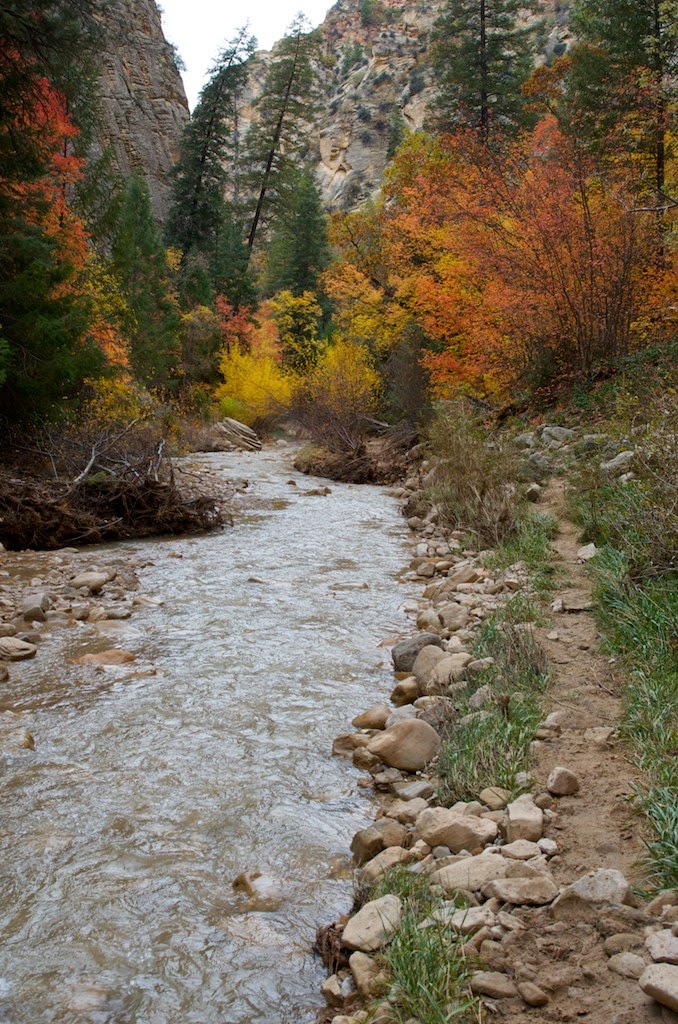 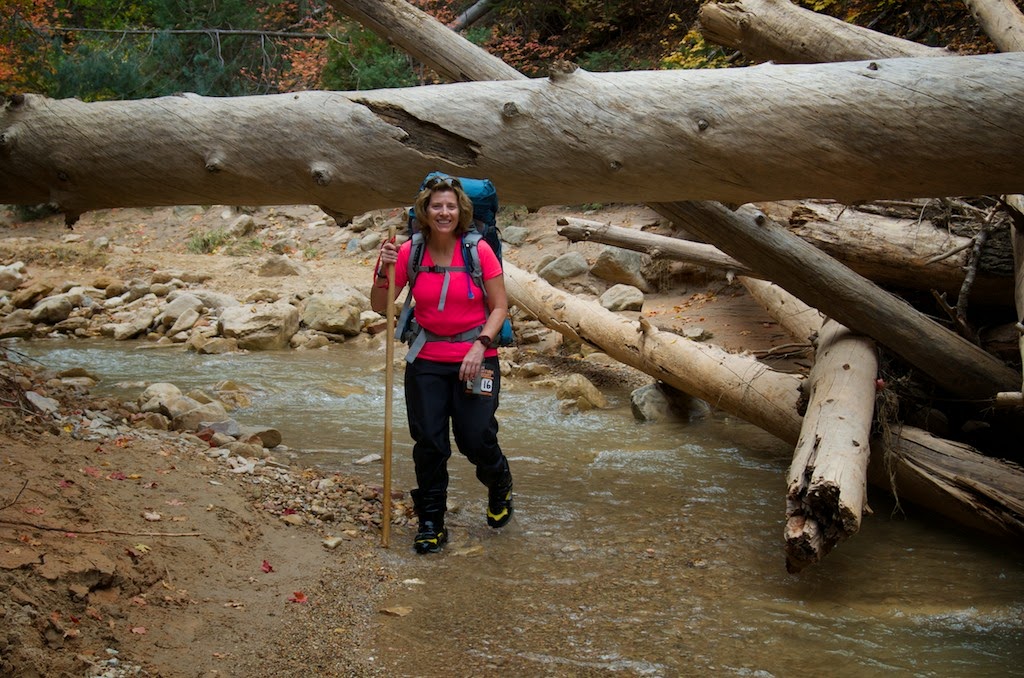 This was not only Kathy's first ever backpacking trip, but this was the first time she'd ever slept outside in a tent. We had concerns but Kathy maintained a positive attitude the whole time and she had a great time even though this is a difficult hike. By the way, there were many opportunities for us to stand in awe of the trees and rocks tossed about by rushing water. 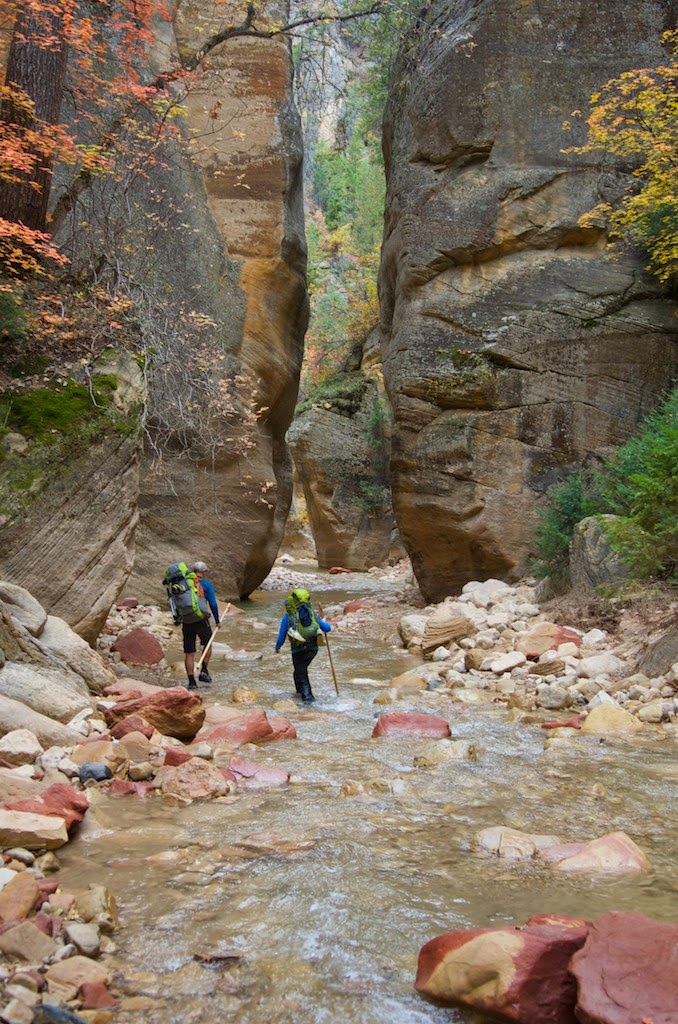 Chip and Jan leading the way. 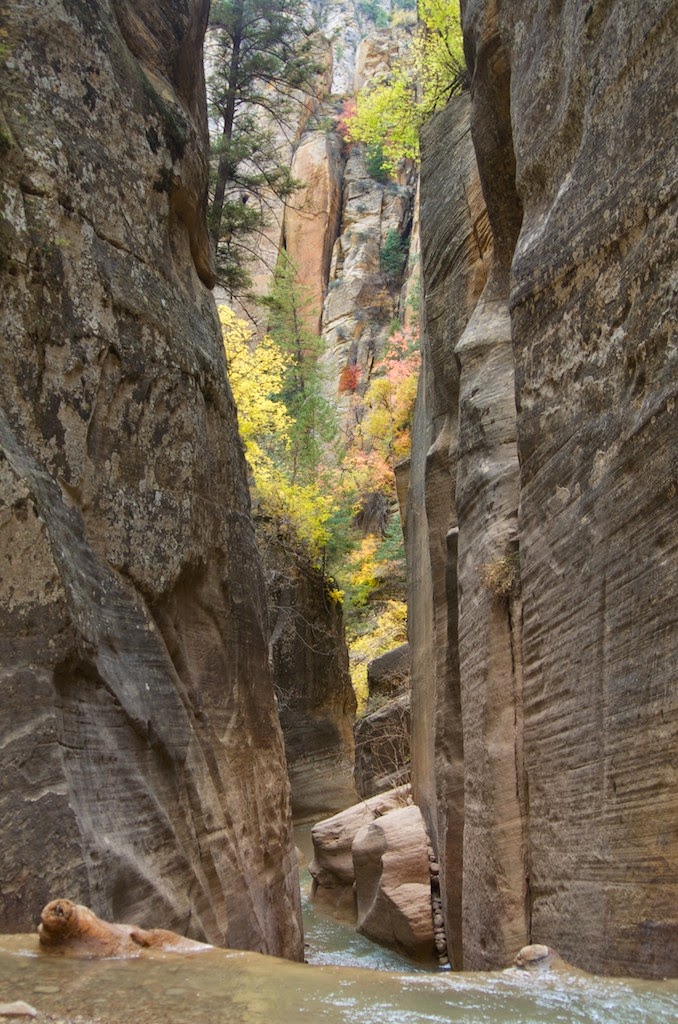 The view from the top of Dead Man Falls. 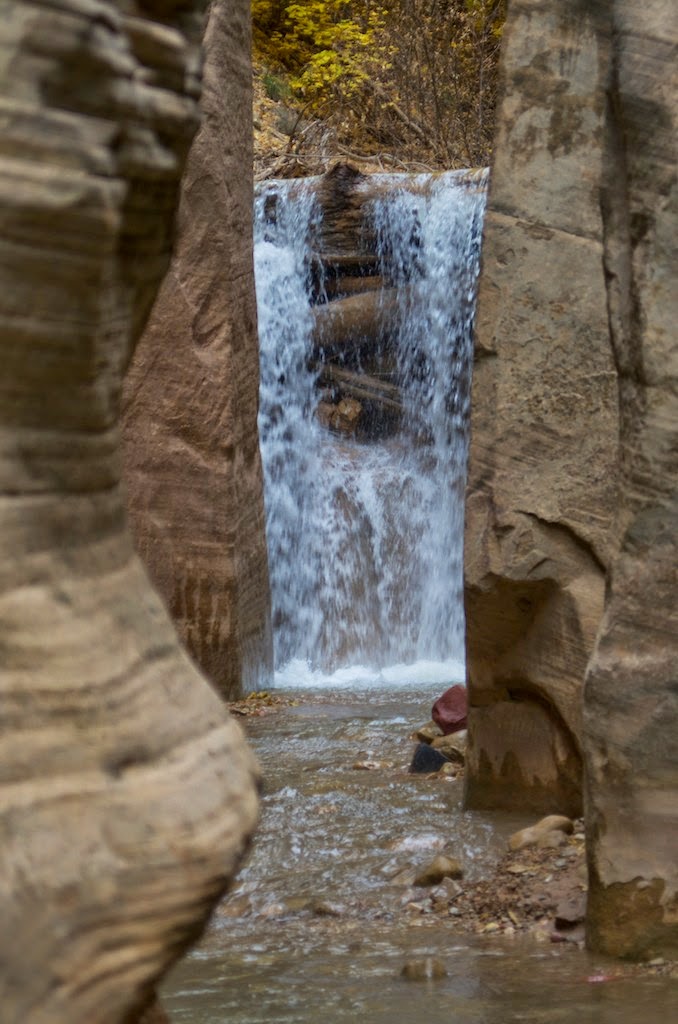 The falls from below. 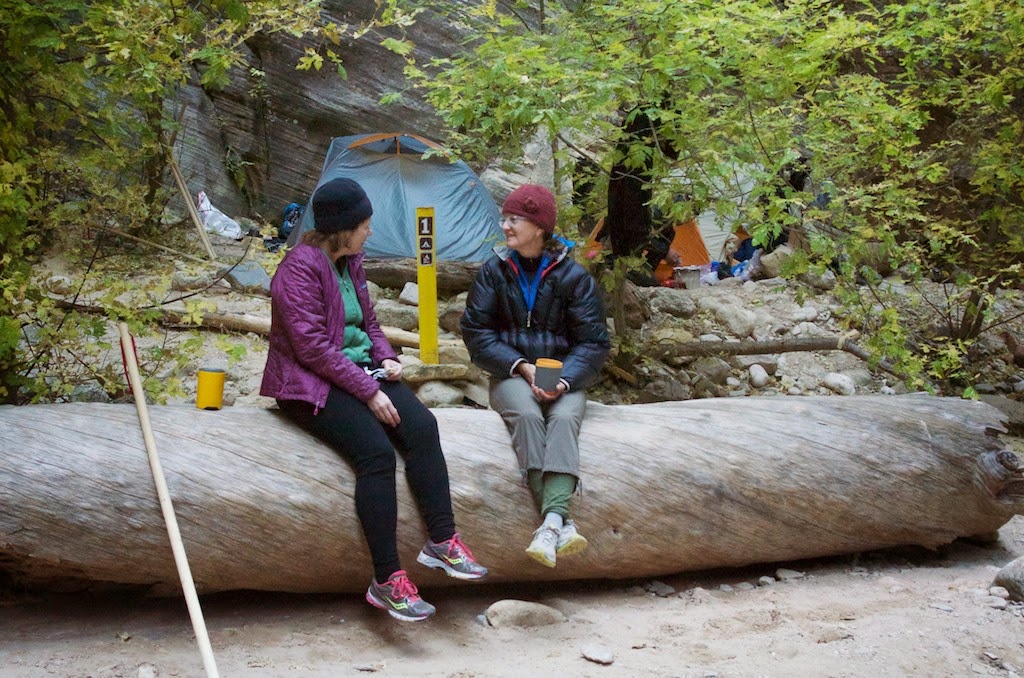 Campsite #1 - Our home for the night.

After six hours we arrived at our camp site. It was great to dry out our feet. We set up our tents, ate dinner, drank some wine, and chatted into the night. When night falls, which it seemed to do quickly, the darkness in a canyon is dramatic.

Kathy is very susceptible to the cold and I was worried she'd spent a cold night in the tent. But the Merino wool long johns and the high-tech sleeping bag and sleeping pad kept her toasty. She got a great night's sleep. We boiled water for tea in the morning and had a light breakfast before breaking camp and continuing our trip. 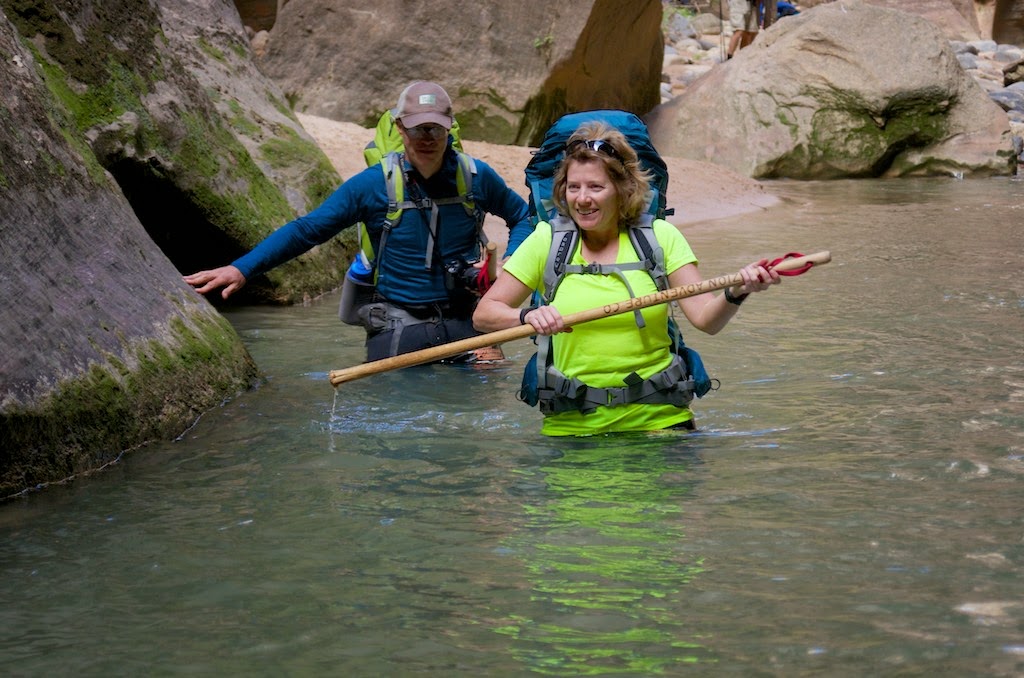 One of the deeper spots.

The deepest part we had to go through was chest deep, which means shoulder high for five-foot tall Kathy. But it was about waist high if you could cling to a rock outcropping and step way around onto a small ledge. I thought it was pretty cool that she and I successfully navigated that. 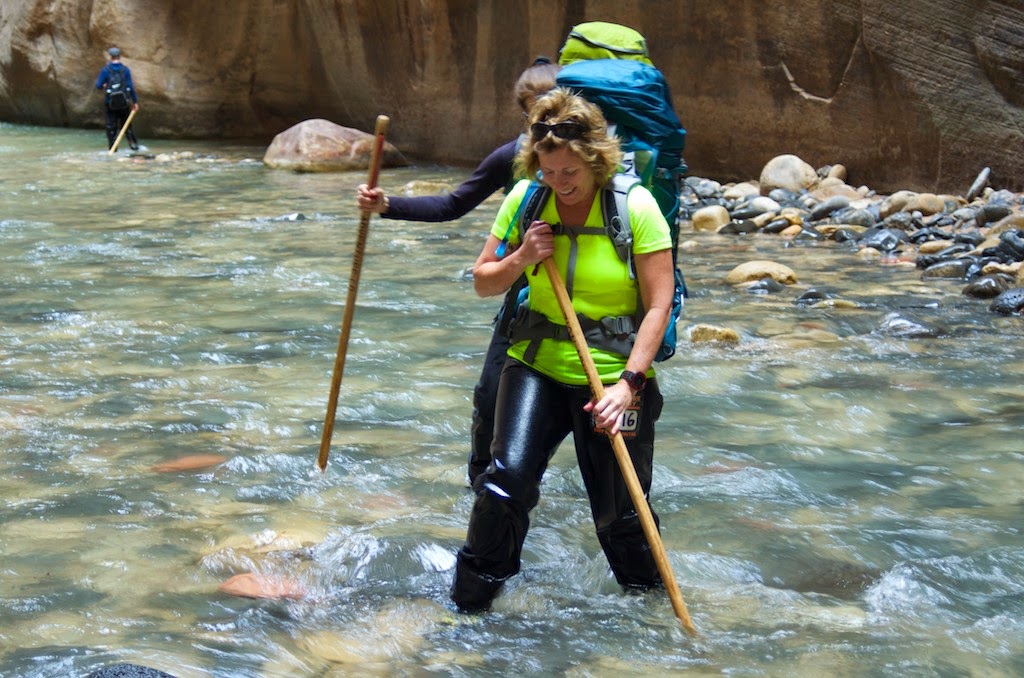 The fun had to end at some point. Unfortunately, it was sooner than expected. The one-day and two-day trips starting at the head of the canyon require a permit. As a result there are very few people along the way. Although we crossed paths with other small groups now and then, for the most part it felt like we had the place to ourselves. That changed after we got through the deepest water on the second day. Day hikers can walk upstream to that point without a permit. So we ran into lots and lots of people coming up the river. We reached the River Walk, a paved trail, after six hours and changed into dry shoes and socks. Then we hiked to the other end of the walk and caught the shuttle bus back to the park entrance. Tired and hungry, we checked into our hotel, got cleaned up, and consumed an excellent meal at a Southwest-style establishment called The Bit & Spur Restaurant.

It looks like I have a new camping partner. Kathy says she's willing to give it another try. How cool is that?
Posted by Hank Greer at 9:10 PM

Email ThisBlogThis!Share to TwitterShare to FacebookShare to Pinterest
Labels: camping

Wow. Amazing pictures. Looks like a magical place. So now that kathy's a veteran outdoor sleeper, I guess it's time to do some S240's?

As a matter of fact I broached that subject the day we got back. Looks like it's a go.