After putting my bike in the rack this morning, I started unloading my panniers when a car drove into the basement and stopped next to me.

"You're really fast. You scared me," the driver says to me.

I had no idea what he was talking about. "Excuse me?"

Thinking back a few minutes I remembered that when the light turned green for me on Spokane Falls Blvd and I started to cross Main.  A car on Main coming from my left with its left turn signal on came up to the red light and started and stopped a left turn as I went through the intersection. That must've been him. He confirmed it.

"Back there at that intersection right outside," he says. "You're really fast."

I got the impression he thought I came ripping into the intersection. "I was stopped at the red light and started going when it was green," I said.

"Yeah, but it was scary. Bikes are scary."

I had no idea how to respond to that so I went back to gathering my stuff. Then he tries to get me into a conversation about how he's looking for a bike to do some recreational riding. Could I recommend a bike shop?

I told him that any local bike shop would do. Just stay away from the big box stores. Shop around. Let them know what you're looking for and what price range you're interested in and you'll find something.

He rambled some more like he was trying to make conversation before calling it off with, "Have a nice day."

Anyway he says he's going to get a bike, which surprises me.

Because bikes are scary.

*** Added the image below to clarify directions. The southbound arrow represents my direction of travel. I was stopped at the intersection and proceeded when the light turned green. The other arrow shows the direction the car was going. He stopped when his light went from amber to red, started to turn left, and then stopped as he saw me going through the intersection. I scared the poor guy! 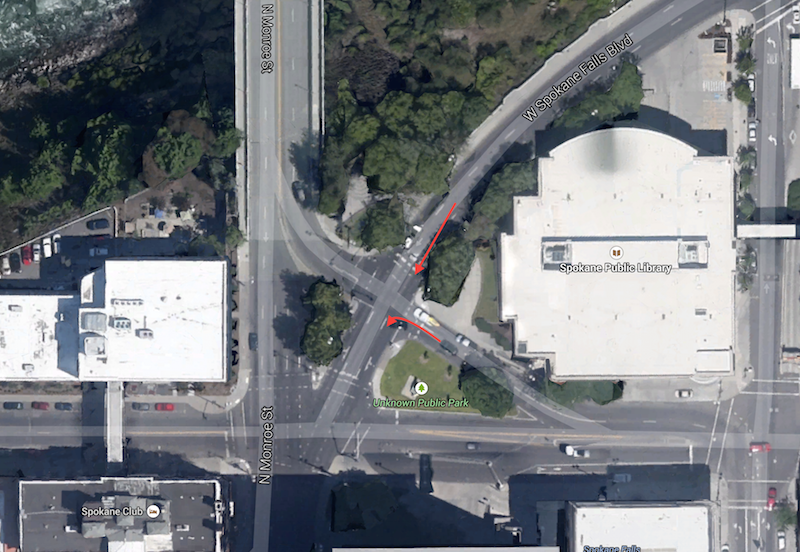 Strange. either we're going too fast or too slow, can't win. I've ridden that route, and I'm not sure how fast even you can get going in that short of time.

So if I understand it right, he was doing a sort of a u-turn from Main into the parking garage, and he was going to turn on his red?

(google's pic is shaded but i guess it might be a regular 90 degree turn. will have look at it next week)

thanks, I was picturing the Monroe/Main intersection and this makes less sense on his part about u going fast. Poor guy! but sometimes it's good they get scared by a biker riding legally. cars are scary!

The gentleman may have been referring to Bike athletic supporters?

If so, he would have a point.