Cyclocross season is coming up and, as usual, I'm looking forward to racing. Yesterday I drove down to Moscow for a practice race at Sky Ranch. My two warm up laps were rough. I was doubting myself and my confidence waned as I struggled through the course. That changed once we lined up to race. There's something about going head to head with others that gives me a huge boost. I jumped out in front of as many as I could at the start so I'd be ahead of them when we hit the single track. That worked out really well for me. I reeled in a couple of other rides on the first lap and ended up behind a young lady. I'd catch her in the technical parts but she'd run away from me on the straightaways. I may have done better if I had more gears on my single speed.

But then it wouldn't be a single speed.

Anyway, I kept reeling her in and she kept running away. On laps 3 and 4 I focused on picking good lines, riding as smooth as possible, and relaxing. I was breathing hard but I felt good. Laps 5 and 6 went by so quickly. Again I'd catch up to that young lady and she'd pull away again. Near the end, her undoing was a dropped chain when she set her bike down to hard after the barriers. Bummer for her but that's part of the game. Right after passing her I realized we had closed in on a young man. He gunned it and tried to run away on the straightaway to the finish. I don't think I've ever spun my legs that fast before. I got right on his tail, darted around him about 100 feet from the line, and sped past him.

So here's what I'm looking forward to. 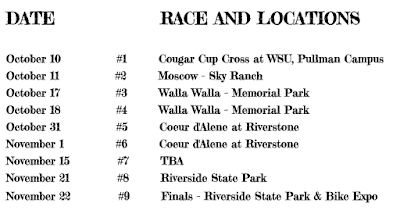 And I hope to squeeze in a race or two on the west side of the state so I can race with my brother John.
Posted by Hank Greer at 6:57 PM

Great work Hank, looks like you will be busy this season! I hope to make it to one of those, I hope you make it to the west side. Rode the course at N Seatac a couple wednesday nights back, it will be in the cross revolution series October 25. Dusted off the geared setup, and discovered not 1, but 2 run-ups!! Hit the wall mid race, prepared for 6, but 12 times up was ridiculous. The following Wednesday the single speed came out, and to my surprise lap times were faster, plus my heart, lungs, and legs didn't give out. Smarter lines, no brakes (unless necessary), and high cadence (39x18) was the answer! I decided to primarily race the single speed this year. Last Sunday was the kickoff for the MFG series in Sammamish. It was a fun, fast, no run up, but double beach course. To my amazement there were over 60 racers in the single speed category! We lined up per helmet manufacturer, Bell was first,,yes,, pole position! I didn't finish that way, but it
with so many racers on course, it felt like I was always in the mix! I know you always bring both bikes, I'll be watching the call up in single speed for you!

Yeah, that's what I love about racing on the west side. You're rarely alone and almost always going up against somebody. I hope to see you at a race, Brian.