The cord in one of our Levolor blinds broke. I couldn't find the same type of cord at any hardware store so I emailed the company. They wanted me to mail the blind to them for repair. Well, screw that. Since it's easy to disassemble and reassemble I wanted to do it myself but they wouldn't have it. I later found out that a small drapery and blind company might be able to help me so I called them. They said they could restring the blind for $40 but it would take three weeks since they were backlogged. Well, screw that, too.

But they also sell the cord for $1 a yard. Bingo. I bought 10 yards and used nine. The blind is back in business. 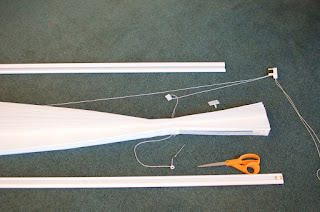 Come over to my house sometime w. some more string.

The house will be locked, but hopefully you'll be able to get in.