Final Cyclocross Race Of The Season

Sunday was the final day of cyclocross racing in the Inland Northwest Cyclocross Series. And with the power out and what with the weather being so cold, I thought I'd go out with a bang and sign up for as many races as I could. I was thinking I could sign up for single speed at 9:00, mountain bike at 10:00, Men's Cat 4 at 11:00, Men's Masters 60+ at noon, and finally the Men's Cat 3 at 3:00. But when I signed up I was told that since I was Cat 4 I could not race Cat 3. You have to upgrade first. Well, not doing that fifth race turned out to be a good thing.

I did one lap to recon the route and stopped by The Bike Hub tent which was next to the barriers. They're always good for a beer hand up so I asked if they would be offering. They said they would be if I was asking. I told them to put my name on a cup because I was doing four races in a row and stopping here on each. After all, bikes are for doing epic shit, right? They turned out to be my loudest and most energetic cheerleaders during the day.

The route itself was typical for Riverside State Park. The run up was long. There were a couple of new features with some whoop-de-doo stuff and one with an interesting off camber turn through a ditch. Outside of two long straightaways it was mostly a technical course, which I enjoy the most.

The college men raced with us single speeders and they had a one minute head start. I reeled in a couple of them during the 40 minutes of racing even with the beer stop for each lap. And I did stop. I'd dismount, jump over both barriers, come to a complete stop next to The Bike Hub tent and drink my beer. Then I'd thank them and get back on the bike. On the last lap, one of the college guys pushed hard to catch me. Well, that just wouldn't do, you know. So I chugged the last beer and apologized for not sticking around long since I wasn't about to let some college kid catch me. And he didn't.

After the race I downed half of a Gatorade and then got my mountain bike out. The mountain bike was much more comfortable on the frozen ground. But I found the giant handlebars kept me from hugging the turns as tight as I normally can with a cross bike. The dual suspension made up for it--except when it came time for going over barriers. Picking that bike up was awkward. Fortunately, I was not concerned with speed. More beer with each lap. Happy times.

Right after the MTB race, it was time for the men's Cat 4/5. I knew this was going to be a faster race and there would be more participants. So I announced at the start that everyone should pass on my right at the barriers because I was stopping on the left side for a beer hand up on each lap. The race went smooth and I didn't get lapped, which meant I got three five-lap races completed. And more beer. 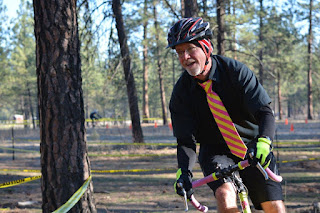 I drank more Gatorade and got ready for the men's masters 40+, 50+, and 60+. Since I'll be 60 at the end of the calendar year in which the current cyclocross season ends (2016), I qualify for the 60+ category. There were four of us. But there were plenty in the 40+ and 50+ groups. So I repeated my pass-me-on-the-right-at-the-beer-hand-up announcement. The other races were 40 minutes long. This is 50. The 40+ started followed by the 50+ a minute later followed by us geriatrics 30 seconds after that. I was pretty beat but still able to ride well. And I knew I was going to get lapped by the 40+ leader, which would trim one lap off my race. That was not going to hurt my feelings. So I pressed forward and three laps into it the 40+ leader blasts by me. Yay! One less lap. And to top it off, not only was I getting beer hand ups at the barriers but also at the run up. I was feeling pretty done on my fourth lap so I lingered at the barriers, sipped my beer, and chatted for a bit before continuing. It proved to be just the amount of time needed for the 40+ leader to catch me about 10 feet away from the finish. He double lapped me and I was thankfully done. Nineteen laps and just as many times on the run up was more than enough. It was a good day.

I changed clothes, thanked the Bike Hub guys again, and headed for the run up for the juniors race. I sprinkled the run up with dollar bills on each of their laps. Those little kids work so hard to get their bike up the hill and being able to stuff a buck or two into a pocket helps take their mind off the hurt. A couple of them were so focused that they blocked us out when we would point out the money to them. That's cool to see a nine-year-old that can already deal with the pain of a run up. And no beer! Those are some tough kids.
Posted by Hank Greer at 7:32 PM