Today I decided to kill three birds with one stone. I needed to get a ton of saddle time (8 hours) in so my butt would be ready for the 24 hour race coming up in a couple of weeks. I wanted to see what other gravel roads are available in the foothills area south of Mount Spokane. and I wanted to get in a long ride on the NFE with a little bit of a load on it. I loaded up the Elephant NFE with six water bottles, four of which went into the porteur bag on the front and headed out.

As always, the three successive climbs on Kronquist were as enjoyable as ever. Just before the third climb I spotted a tom turkey in the road up ahead. He was spreading his wings and his tail feathers would spread and flash up and down. I was wondering what he was up to. As I got closer he took off and there sat a hen. Oops. Looks like I interrupted something. No doubt he'll track her down later.

Once I got to the foothills I took Temple to get over to Newman Lake. I stopped on Temple to have a snack not far from a house. The owner and his six dogs came outside. The dogs saw me pretty quickly and started making a ruckus. As they ran towards me their owner ran after them. Each time he called one by name that dog would pause. He'd call another one and while that dog paused the other would take off since the others were still running. So I had five big dogs and one little yipper advancing at me. I kept my cool and started talking nice to the dogs. The big ones chilled out, sniffed me, and headed back to the owner who had finally caught up with them. But the little dog wasn't having of of that. He kept making a fuss and wouldn't mind his master who then picked him up to take him back home.

The Summer Road only section of Temple is in such terrible shape that it's an absolute joy to pick your way through the washouts, rocks, fallen branches, etc. Heading east you're going downhill so you basically coast, steer and brake as needed. Since the NFE does not have front suspension the vibrations are transmitted all to well through the arms and shoulders as you're braking going downhill on really rough stuff. Fortunately, I was wearing good gloves. 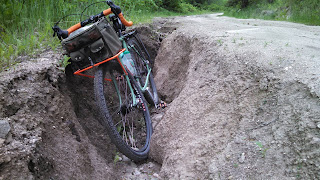 Okay, so maybe this ravine on Temple isn't that rideable.

After reaching Newman Lake I rode around it for the first time ever. Starr and Muzzy roads have some fast traffic on them but not that much. I'm sure it picks up in the summer time. Studying the map before my ride, I saw there were a couple of gravel roads northwest of the lake. Cougar Lane made a large loop and it supposedly connected with Snowy Ridge Lane, which was also supposed to connect with East Foothills. It turned out Google maps was wrong. I rode up Snowy Ridge Lane thinking I was on Cougar Lane and ended up at a house. Three men standing next to a pickup truck looked at me with an "Oh, good, something else to talk about" look on their faces. I had the music cranking on my Bluetooth speakers so I rolled up to them with this Cajun fellow doing a cover of Dire Straits' Sultans of Swing. "We are the sultanes. We are the sultanes of swing." I dropped the volume and told them I thought I was lost. They agreed. Snowy Ridge Lane is essentially a long-ass driveway to this house. They told me how to get to Cougar Lane but that was signed as a private road. And the place where it looped back near the start goes through someone's driveway. So no new gravel roads there.

I got back on East Foothills and followed Norman back to Temple so I'd stay on gravel. Then I went back the way I came. Since I still had over three more hours of riding I rolled to the other side of town to Riverside State Park. The middle and high school mountain bike state championships were being held there and I was hoping they would be done so I could get some trail time in. They were just finishing up and were starting to break down the course. I took a leisurely route to Five Minute Hill and went up and down it five times. One thing I really like about the NFE is the gearing is perfect for climbing for me. Five Minute Hill seemed so easy each time.

I headed out of the park and went home via Indian Trail and Strong Road over Five Mile prairie. Going up Strong Road was an aggravating slog. It's dirt and gravel and it is washboarded like nobody's business. Trying to climb with the handlebars and saddle alternating going up and down was quite the exercise. What a relief to hit the pavement at the top. All in all it was a very good ride. I was out for almost nine hours and Strava says I was in the saddle for seven hours and forty minutes.