A Very Respectable Effort And Finish By The Solo Siblings

John and I signed up to ride the 24 Hour Race solo this year, he in the 50-59 group and I in the new 60+ group. (After crewing for me last year, John decided to take a shot at going solo. Yay, John!) Our sister, Barb, volunteered to crew for us.

We discussed camp decorations and decided to go with a 'Sofa King Solo Siblings" theme involving large posters of ourselves. We were also going to bring a sofa out but decided we would be too tired after the race to want to mess with it. Over the weekend I learned there are inflatable couches so I made a note for next year.

Frank Benish and I were the only entrants in the 60+ solo category. He was camped across the road from us. Cosmic Miller was his support crew. If you know Cosmic then I don't have to say anything. If you don't know Cosmic, he's the guy you want on your side if you want a high energy person taking care of all your mechanical issues and boosting your morale to take your mind off the pain. Cosmic was kind enough to help out me and John since we were neighbors and he was there and he had the time. He saved my bacon when we noticed I had a nail in my back tire. He got one of his and swapped it out for me for which I was extremely grateful.

Frank is quite the competitor and he took off fast on the first lap. And he kept up the pace. When I reached five laps, he had six. But he was going through some issues that I thought would slow him down. He was throwing up and he had a bad crash on Devil's Down. My 4:00 am lap went well and I fueled up real good. Cosmic was chatting the whole time I was there and was really emphasizing having fun. I took off and as I got into the lap I decided I would two laps without a break. Nobody saw me go by. After I didn't show Barb and Cosmic got to wondering about me. They went down to the timing tent and saw what I did. I knocked out two laps in under three hours but I emptied my gas tank in the process. Cosmic was pumped that I was making a race out of it. He told me that Frank had taken an hour break and I had caught up with him. So I ate a bunch more and headed out again hoping Frank was too tired, sick, and beat up to keep up the pace he set. But it was not to be. Sleep deprived people can't count very well and I was still a lap down. I thought my back-to-back laps were 11 and 12. They were actually 10 and 11. Regardless, Frank was not about to let up. He finished with 14 laps and three crashes. There are no photos but he was a bloody mess when he came in off his last lap. The man is a competitor.

Barb was a real trooper looking after me and John. I think she may have caught an hour nap in the night. All three sleep-deprived siblings were a mess when the awards ceremony started around 2:00 pm.

John and I were going to throw our posters into the dumpster. For some reason, Cosmic wanted John's and Frank wanted mine. I imagine they'll be showing up at some future bike race.

John's goal was to do ten laps (150 miles) and he reached it. Mine was to do 14 and I came up short with 12 (180 miles). That back-to-back emptied my gas tank and I was a sluggard after that. But I kept rolling the entire time until 10:30 am when I realized I just didn't have enough left in me to go around again.

Neither John nor I had a serious crash. My front tire slid out on a lose turn but I went down in dirt so the impact was not abrasive. 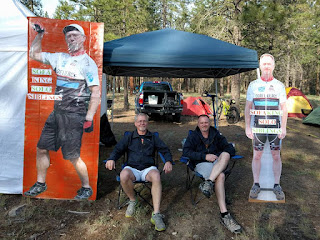 At base camp before the race.
The larger than life posters we made of ourselves were a big hit. 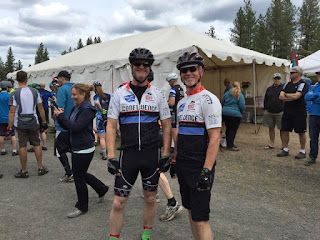 Falling in at the end of the pack for the start.
We're in it for the long game so there's no rush. 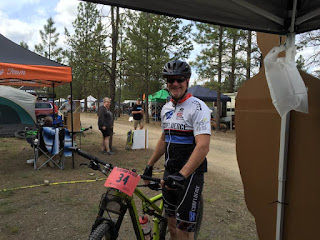 John came in so hot from his second lap that he blew right by the camp. 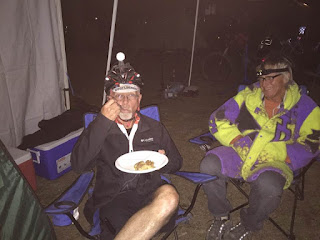 Fueling up with some apple crisp that Barb made while Cosmic looks on. 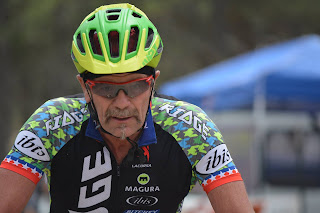 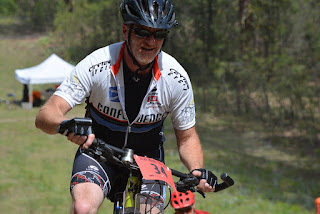 John coming up The Pipeline. 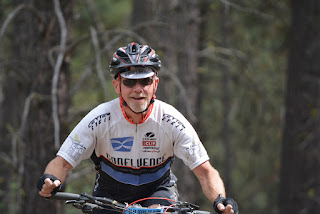 Me coming out of Little Vietnam. 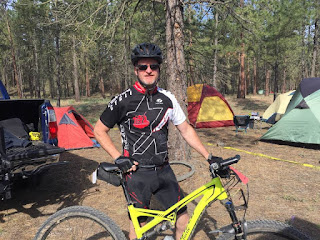 John heading out for lap #9. 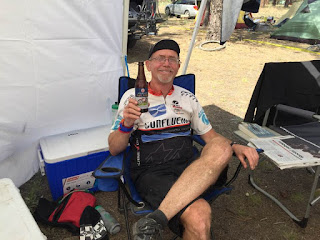 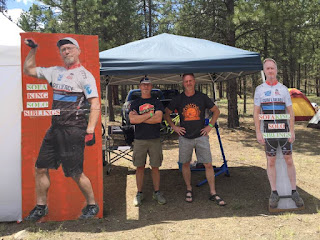 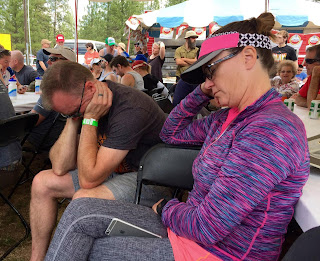 John and Barb catching a snooze before the awards ceremony. 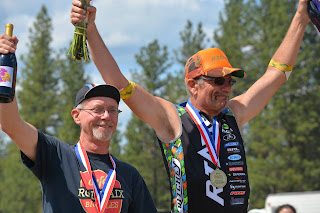 On the podium with Frank. 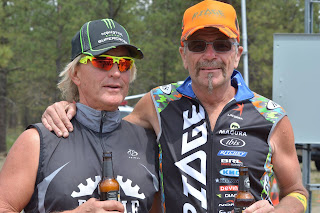 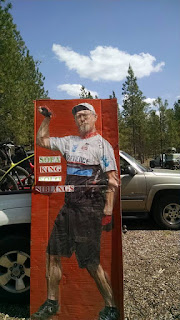 To the victor belongs the spoils... 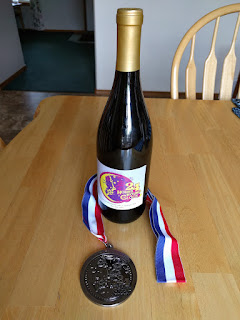 Stellar job, Hank! Thanks for the great race report and pics!

I gotta tell you it was pretty exciting watching your race unfold. Frank is an animal but don't sell yourself short. Everytime I saw you there was a big smile on your face and you were still putting the hammer down. You are a machine!