Doug Clark held his seventh Street Music Week and had plenty of volunteer musicians on hand to raise money for Second Harvest Food Bank. (I know he says it's the sixth one but if the first was in 2003 then the geek in me says this is number seven.) To my surprise I found a friend of mine playing the Irish Pennywhistle. He says this is the first time he has subjected the public to his playing. I didn't feel subjected to it at all. The gentleman playing the saxophone retired from the Air Force in 1972 after serving 20 years as an Air Policeman. He was a joy to converse with. On display at his feet was a photo of himself and his sax from 40 years ago. To him it seemed like yesterday. 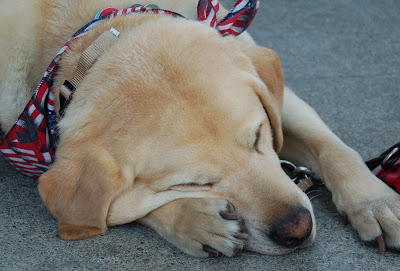 Next to the bluegrass group I found what must be the world's most exhausted dog.
Posted by Hank Greer at 8:10 AM

I really missed out.

I did see the Top Hatter harmonica guy at the Fred Meyer bus stop, and asked him how the gig went. He enjoyed it.