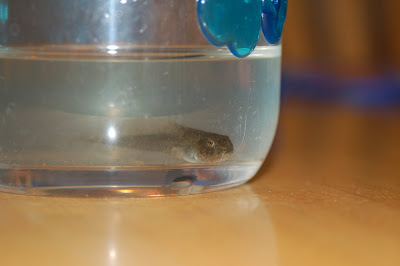 Kevin is Stephanie's tadpole. She rescued him (her?) from Josh's biology classwork when he and a classmate had to gather and photograph a variety of insects and water creatures from the Little Spokane River. Kevin has been occupying a small aquarium and he's slowly getting larger and growing limbs.

Today, Steph decided to change Kevin's water since the aquarium he is occupying was getting funky. She caught some rainwater in a large pan and then poured some in on Kevin. Kevin froze up and Steph realized the rainwater was kind of cold. She scooped him out in a small glass so he wouldn't be so cold and to give the tank time to warm.

So how to check the temperature of the water? Steph got the thermometer. In her words she described it as "the one you stick in your face". It wasn't much use because it only showed "Low".

No word on how she refers to that other type of thermometer.
Posted by Hank Greer at 9:17 PM