Today was the second day of the Greater Spokane League District Track Meet held at Spokane Falls Community College. Josh ran in the 4A 1600 meter race.

That's Adam Thorne of Ferris next to Josh leading the pack after completing the first lap. 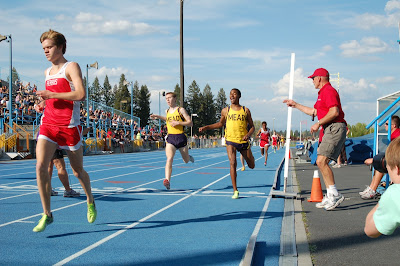 He finished third just a squeak behind his teammate, Andrew Gardner, and a second behind Adam Thorne. Josh's time was 4:20 which is a yet another personal best for him. The boy is on fire!

He moves on to the regional meet being held in Yakima a week from now.
Posted by Hank Greer at 8:18 PM