It May Not What It Appears To Be

According to Agenda 21 Is Evil, the sustainability movement as outlined by Agenda 21 is a clever, environmental-friendly worded secret plan of the United Nations to obtain total control over our lives. They provide some helpful hints to clarify the language.

And in exposing the duplicity of Agenda 21, they also warn:

Now many of the goals and concepts behind “sustainability” do not sound bad at all. Tyranny and government oppression is never marketed as such in the open – one always must have publicly admirable goals in order to justify any agenda that a regime is trying to promote.

Here are some of the key arguments in their exposé of Agenda 21.

The United States was founded on the principles of natural law codified in our Constitution, which formed and guaranteed a republican form of government. I am not talking about the political party, I am talking about the form of government where the rule of law governs above the whims of mankind.
...
Democracy, on the other hand, is the rule of the majority, not the rule of law. The United States was not set up as a democracy as our founders despised democracy because it undermined the very reason for the foundation of civil government: the protection of private property.
...
Unfortunately, our republic is being destroyed. Individual rights, as guaranteed by the United States Constitution, are being mocked and dismissed by our public school system. Instead of teaching the true history and intent of our country’s Founders, public education has become the most useful tool to justify corrupt Supreme Court decisions which ignore the framer's intent, and treat the document as a living, breathing entity which can be changed at will by the same government it is supposed to be constraining ....However, foundations long advocating a global socialist economy, like the Carnegie Foundation, have infiltrated our schools. They indoctrinate our children by convincing them that we are a “democracy,” where public theft is legitimized for the sake of “equity”, instead of a “republic,” where private property is respected, hard work is rewarded, and our rights are commensurate to our responsibilities. (Bolding in the original)

That brings us back to this religion of false environmentalism. In order to get people to give up their natural rights, you have to redirect their focus on something greater than themselves. In time of war, it is patriotism – the need to defeat the other side....The answer involved creating a series of new wars against ideas, instead of actual nation-states, i.e. War on Drugs, War on Terror, War on Environmental Pollution. The most intriguing idea generated in the report was the ability to mobilize people to confront an environmental crisis by convincing them that if they did not act in submission to their government in support of these goals they risked their own lives and the lives of future generations. Such language pervades UN Agenda 21. In the Report from Iron Mountain they even suggest deliberately polluting the environment or making up a fake crisis in order for people to submit to a more powerful government. (Bolding in the original)

Note that The Report From Iron Mountain was a work of satire that was amazingly passed off as an official government panel's report.

It is no wonder that large financial interests financed Lenin's Bolshevik takeover of the Soviet Union, the rise of Hitler's national socialism in Germany, and Chairman Mao's Communist revolution in China. In none of these centrally controlled tyrannies was the lot of the poor made better; however, those in power exercised tremendous control over those below them. Those in control lived lavishly, not like the Communist dream of “equity” in the idealist literature. Socialism is the lie spoon fed to the masses, like the ideals of democracy, sustainability, and manmade climate change, to get people to go along with the corporatist takeover of their property rights. This is what we are fighting. It is “We the People”, as individuals and small business owners, against global multinational corporations who promote the sustainability agenda to increase control and corporate profits, making the average person dependent on these same corporations and the state itself.

Now if you thought what you've read so far wasn't crazy enough, check this out.

The International Council for Local Environmental Initiatives (ICLEI) is an association of local governments from around the world promoting and implementing sustainability programs at the local level. 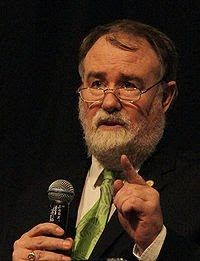 This is David Cadman, president of ICLEI since 2007 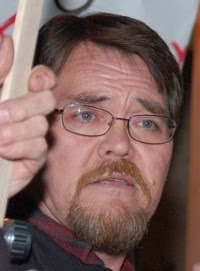 This is Mike Fagan of the Spokane Patriots. He is antagonistic towards ICLEI, Agenda 21, and sustainability.