It turns out Rhode Island--actual official name is The State of Rhode Island and Providence Plantations--was the first of the original colonies to declare its independence from British rule (May 4, 1776) and the last to ratify the U.S. Constitution. What did I do to celebrate? I spent the day listening to various presenters read their Powerpoint slides to me.

And I went for a run and had a beer with dinner. 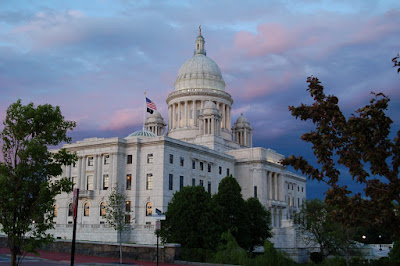 I'm at a hotel next door to the state capitol building. Atop the fourth-largest self standing dome is the statue of Independant Man. Cool!
Posted by Hank Greer at 5:08 PM