I've been working on expanding my running to include other ventures. My long range plan includes ultra-running. There's one or two runs I'd like to take a shot at next year. Now both readers of this blog may remember that just over two years ago I said I'd never do another marathon. Technically that's true, because ultra runs are longer. The more comfortable and efficient running form I've adopted over the last 16 months has made a huge difference for me.

For the short term I'm trying out trail running. Last weekend I went to Riverside State Park. Wearing aqua sox on the rocky trails was very uncomfortable at first but that turned out to be a blessing. I was forced to focus on relaxing and letting my feet kind of squish down and mold around whatever was poking up from the ground. When you tense up and anticipate the pain, it hurts worse and sticks around longer. When you relax, the pain is diminished and fades quickly. Looking at those two sentences you're probably thinking that trail running in minimalist footwear is not painless. Not entirely. But if you slow down and relax it's just as much fun as if you're wearing shoes.

This morning I went to Camp Sekani just off Upriver Drive. The city is hosting a trail run on Oct 16 that I'm thinking about entering. I've never been on the trails before so I went to scout them out. I got there around 7:30, the fourth vehicle parked in the lot. The sun was low and bright in the east, the sky was clear and the temp was cool. Perfect.

I had no clue what trail to take to where. The satellite view on Google maps showed plenty of space to go north and west so that's what I did. I threw on my Camelback and started climbing. Upon reaching some power lines, the trail I was on turned westward. Running through the trees, switchbacking down and up ravines, and walking up the really steep parts was not only a good overall workout. It was serene. 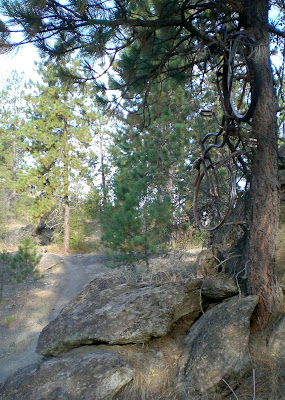 Bounding along the trail I came upon this. Some kind of sign? A warning? What strange tribe of people would leave this mark, I wondered. 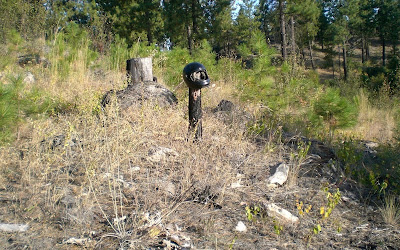 Continuing on, I spotted yet another puzzle. What does this mean? Am I trespassing on a sacred burial ground? 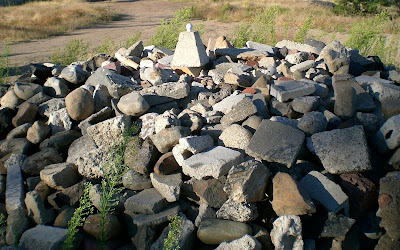 At the end of my westward trail I climbed a hill topped with microwave towers. And there I found a strange shrine of some sort topped with a golf ball. A weather-worn Jack-in-the-Box antenna foam ball stands guard. Yet another puzzle to ponder.

Taking different trails back east and impulsively veering off on tangents along the way, I realized I wasn't quite sure where I was. I knew Upriver Drive was south of me but I didn't know where I was in relation to where I parked. Since I was trying to familiarize myself with the area, I figured there be no harm done and pressed on eastward. I ended up coming out on Upriver Drive near Boulder Beach. Turning around, I followed the trail running parallel to Upriver Drive back to the parking lot.

I think what I enjoyed most about this morning's trail run was the nice, easy pace that allowed me to take in the sights, strange as they were. And yet my sore legs and sweat-drenched clothes told me I had a good two-hour workout.
Posted by Hank Greer at 10:24 AM

Your description of dealing with the pain of trail running in Aquasox sounds very familiar... like childbirth pain management.

Shan,
that was EXACTLY what I was going to say!