Bring Back The Draft

Yesterday Senator Lindsey Graham spoke at the Halifax International Security Forum held in Halifax, Nova Scotia in which he advocated going to war with Iran.

"The last thing America wants is another military conflict, but the last thing the world needs is a nuclear-armed Iran... Containment is off the table." 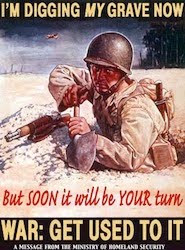 The South Carolina Republican saw the United States going to war with the Islamic republic "not to just neutralize their nuclear program, but to sink their navy, destroy their air force and deliver a decisive blow to the Revolutionary Guard, in other words neuter that regime."

This is not new language for Graham. He gave a speech at AIPAC last March in which he also advocated going to war with Iran as a last resort and yet as the only choice. And how fitting that he ended that speech with these words.

God bless all those who believe in peace and tolerance.

Graham must reserve special blessings for those like himself who see no alternative but war.

During dinner a few nights ago I told Steph that we should bring back the draft and include women.

Yes, but mandatory government service is an excellent motivator for getting young people to learn what their government is doing and care enough to do something about it.
Posted by Hank Greer at 5:59 AM

I joined the military when the draft was raging in the 1968. At that time if one was about to be drafted he could let it happen, enlist, or run. The majority who were drafted or enlisted did not want to be there. Many did the minimum to get by and were a huge problem for those tasked to supervise and train them. It was a mess.

I would not want to voluntarily go back to that environment by instituting a new draft.

I used to listen to NPR while cooking dinner. Then I switched to KYRS. The last couple month's I have been listening to the CBC. It is almost jolting to the system to hear their take on defense, healthcare and their other national issues.

Yet, They speak the same language as us, reminding me of the Star Trek episode (Mirror, Mirror)where Kirk gets transported on to the evil Enterprise and evil Kirk goes to our dimension's Enterprise. Everything is kind of the same, but at the same time radically different.

When I hear Canadians talking, with voices like ours, and hear what they're talking about, I realize how far we have drifted into the Crazy Dimension where we spout off with little consequence.

A draft would certainly make things real for the bullet heads. However, I think that most of those who are itching for the USA to get into another war would be too obese to serve.