Over the past couple of months I've had a pain in my lower right abdomen that appeared sporadically at first and became more constant the last couple of weeks. Running made it hurt worse, especially the long runs. It felt like a pulled muscle at first which made it easy to ignore since it didn't occur that often. But after running to work last Friday and suffering for a couple days afterwards I went to see the doc. It turns out I have a hernia. So I have to take it easy until I see the surgeon and get it fixed. Running is out which totally bums me out. I tried ice skating today and that was better but it still hurt and I wasn't skating hard enough to work up a sweat. I was hoping to do one more cyclocross race this Sunday but after trying a few mounts and dismounts in the front yard today, I don't think that's wise.

Now I can ride my bike comfortably. But, in the interest of marital harmony, I don't bike commute to work from November to February. So you know what that leaves me. 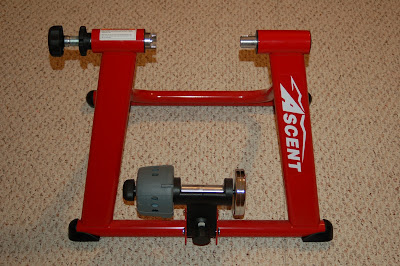 Welcome to the winter club Hank.

Worst trainer ever. I have one just like it. It's loud, it's weak, and it needs to be repaired every few weeks. I guess it's a good match for me.
- Ventura

Could you run on a minitrampoline?

I have freaking clue what that is... not exactly an uncommon experience for me today... but I hope your hyena is less disturbed very soon.