I woke up this morning, looked outside and saw that it had rained. Whoo-hoo! The first cyclocross race of the season was today and I was looking forward to splashing through puddles and getting muddy. I got to Riverside State Park and it was bone dry. The rain missed it. Bummer, but not the end of the world. 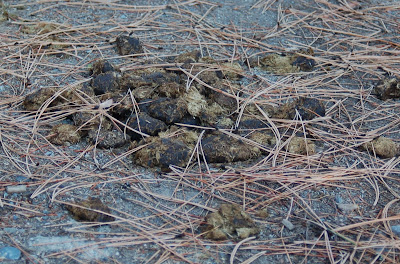 Scouting out the course I found it was not completely without hazards.
I signed up for two races, the Men's Masters 50+ and the Men's Cat 4. They were scheduled back to back so I figured (quite correctly) I'd be very tired at the end of the day. The Master's race did not go well for me. I was obviously rusty. I felt like I couldn't do anything right. My turns were too wide. I wasn't raising off the saddle on the dips and bumps. I could dismount just fine on the approach to the barrier and run-up, but I couldn't get the bike off the ground in time. One time I slammed it into the board hard enough to knock the chain off. That cost me some time putting it back on once I got to the top. 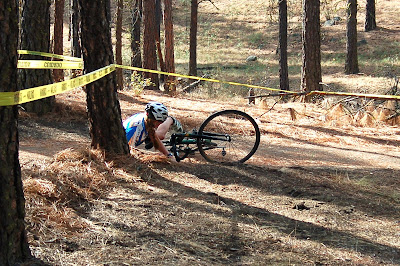 With the track being so dry, the sandy turns could be tricky as this young lady learned. I did the same thing on another turn.
The race leaders caught me about halfway through my fifth lap. So I got to complete five and I was beginning to regret signing up for a second race. I drank some sport drink and chilled for a few minutes. At least I was warmed up for the race. Since my front tire was slipping in the sandy turns I thought I'd bleed some air to see if that improved the traction. Besides, everybody knows you look more like a pro at the start line if you lean down, spritz a little air from your tire and then give it a squeeze, right?

The second race went much better. I focused on technique during the turns, over the bumpy terrain, and picking up the bike for the run-up. 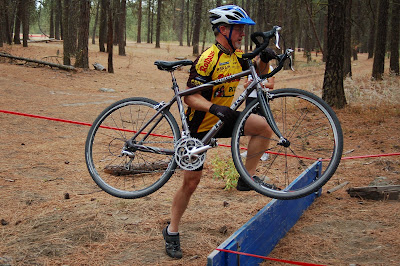 Doing much better this time around.
(All photos of me by John Speare.)
On the fifth lap I assumed that, like the first race, the race leaders would catch me and I'd be done. But the cyclocross gods had other plans. My race goal is to complete as much of the course I can before I get caught by the leaders. As luck would have it, the leaders caught everyone behind me--was anyone behind me? But I arrived at the finish line where the race official informed me I had one more lap to go. Yeah--one of those "be careful what you wish for" scenarios. 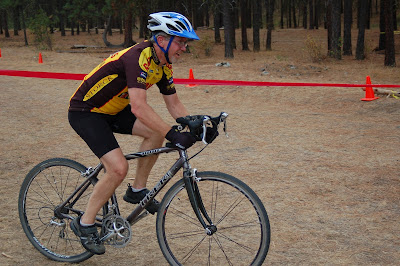 Really wishing this was over.
(No, I am not track standing.)
I continued on the course feeling all alone. Anyone ahead of me was well ahead. Any riders behind me were now finished. My eleventh run-up went without a hitch, but took a little longer. The spring in my step was now a trudge.
Kudos to Emde Sports for putting on a first rate race. It was a lot of fun.